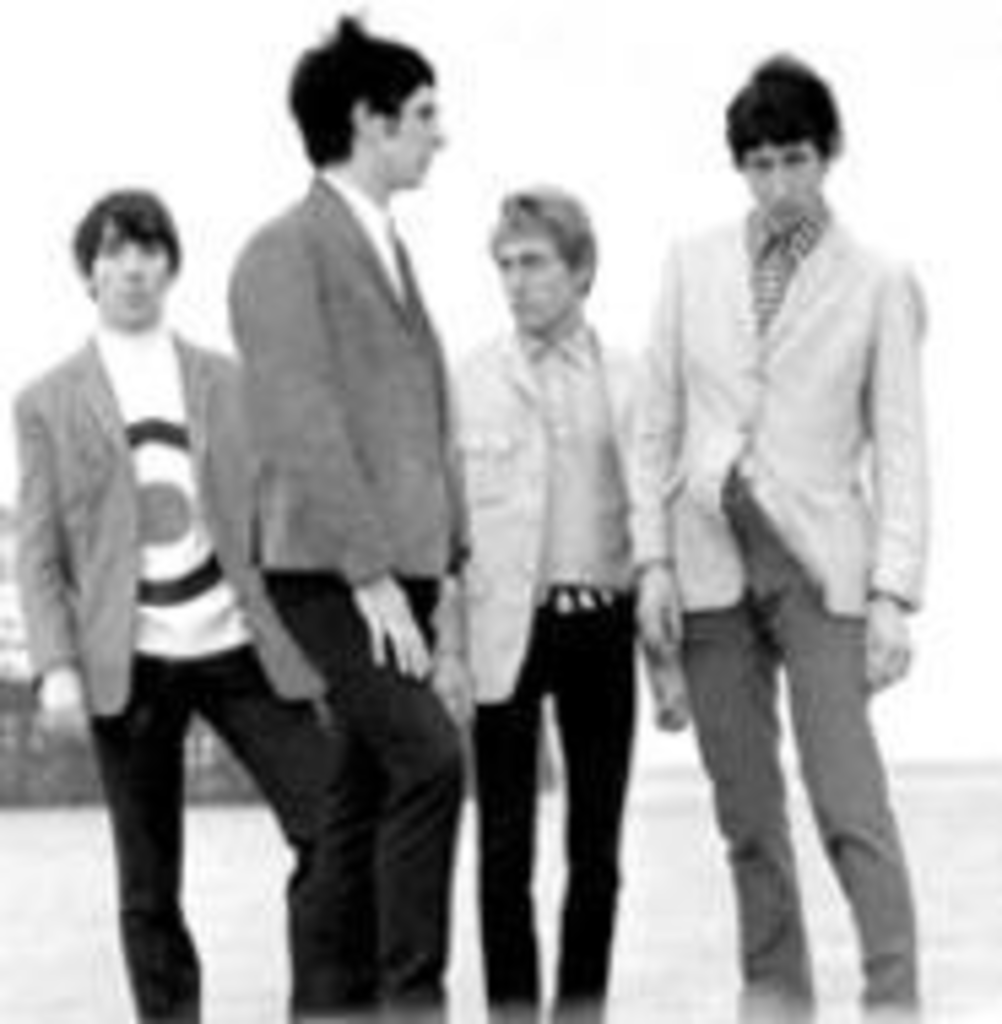 The publicity materials sent in advance of the at-long-last release of The Kids Are Alright on DVD suggest that the maker of the 1979 documentary about The Who has been on the lam—in the rock-and-roll witness relocation program, perhaps, far from the long windmilling arm of justice. A “recluse” is how the press release describes Jeff Stein, who as a pushy young man in the mid-1970s convinced his favorite rock-and-roll band to let him film them for a documentary against their wishes and better judgment, especially because he was a kid with no filmmaking experience. “Director Jeff Stein has rarely spoken publicly about the making of the film in the 25 years since he completed production,” says the notice, which further ratchets up the hype by referring to Stein as a “notoriously enigmatic figure”—as though he were some shadow living in a dark cave never to be found again. Except when you call his cell phone.

Stein, reached while driving the streets of San Francisco, figures he’s been labeled as reclusive—a rock-doc Howard Hughes—merely because “there weren’t many opportunities to do interviews, I guess,” he says, laughing. “I did a lot when the movie came out, but since that time, I’ve been being treated for post-traumatic stress syndrome, so I’m just re-emerging after 25 years of therapy.” He laughs again at the notion that he is a Mystery Man. The dude’s quite happy to be found. It’s just, well, nobody ever came looking for him.

But, till now, why should they? The Kids Are Alright has existed for years only as a bastardized TV version or an out-of-print videotape, and a shoddy one at that. Certainly, it deserved better: The Kids Are Alright ranks among the most anarchic and bravest rock documentaries ever made; it’s not a historical document, as Stein often says, but a “hysterical document.” It’s a riotous, delirious and, in retrospect, touching mishmash of footage: The film opens on the set of The Smothers Brothers Comedy Hour in 1967, as Keith Moon’s drum kit explodes after “My Generation” and ostensibly ruins Pete Townshend’s hearing forever, and moves from 1960s TV-show lip-synchs to ’70s-era interviews with a bitter Townshend and a playful Moon and finally climaxes with a pungent “Won’t Get Fooled Again.”

In 90 minutes, it captures 15 years’ worth of tumultuous history: The Who as trend-setting Mods bopping out R&B standards to packed nightclubs of tuxedoed teens; as rock-video forerunners preening for young directors making goofy little promos; as affluent assholes trashing hotel rooms for shits and giggles; as arena-rock deities rendering the stoners deaf, dumb and blind; as dinosaurs refusing to lie down and fossilize in the wake of punk’s coming revolution.

“Hysteria over history,” says Stein of his agenda in making the fans’ ultimate home movie, and never before or since has a band been captured at its best and worst in a single sitting. Stein had first lionized the band from a distance with a book of photos from The Who’s 1971 tour, but that didn’t satisfy his cravings. In 1975, he found Townshend after the premiere of Ken Russell’s film Tommy and badgered him about making a documentary; Townshend only agreed after manager Bill Curbishley thought it an idea and investment worth pursuing. It would take nearly four more years to make the movie, during which time beautiful drummer Keith Moon turned into a prematurely fat old man and died in the bottom of a bottle. By the time The Kids Are Alright premiered at the Cannes Film Festival in 1979, The Who appeared to be on the verge of becoming The Who Were They. The movie, condemned at the time by The New York Times as being “willfully uninformative,” captured not only lightning in a bottle but an entire thunderstorm.

Yet it has somehow managed to slip through the cracks since its U.S. release in May 1979. Its gleefully disheveled, impressionistic telling of The Who’s history recounted through the use of old TV clips and rare concert footage and newly staged performance pieces has been treated shabbily. The movie’s been butchered for video release and television broadcast, with scenes sliced and performances sped up for time till it all felt like Alvin and the Chipmunks were playing live at Leeds. Remaining prints decayed to the point of becoming unwatchable. And for years The Who did nothing to enhance its reputation: Front man Roger Daltrey once damned Stein as an “amateur,” while bassist John Entwistle re-cut the film for release in Europe after dismissing it as talky and dull and exploitive of Moon’s death in September 1978. In one interview, Entwistle said he called the band’s manager, Bill Curbishley, and told him “the film is a piece of shit; I’ve got to stop it” and threatened to file an injunction against its release.

Entwistle, who died of a cocaine-related heart attack June 27, 2002, always seemed the least fond of The Kids Are Alright—even though the bassist was the one band member to do any post-production work on the movie, accompanying Stein back to the States for several months’ work on the tweaking of the soundtrack. In 1996, the bassist told Goldmine magazine that after Moon died, Stein went in and added 15 minutes of Moon footage and that every time Entwistle argued about it, Stein would cut another of the bassist’s scenes. “I figured, God, I’m not going to be in the movie if I argue anymore,” Entwistle said. “They cut the mini-opera in half and put some stuff in there of Keith being real nasty. The bit about CEYou couldn’t afford me’ and all that sort of stuff. I didn’t want him to be remembered like that.”

Stein insists, as he has for years, that no scenes of Moon were added or deleted after his death—though Who historians (Whostorians?) have noted the cutting of a single line of dialogue: the band’s being asked on a television show about “the Who decade.” Townshend pretends to mishear the line: “Who decayed?” he responds, before turning to Moon and saying, “They didn’t all survive.” Leaving it in didn’t seem terribly appropriate.

Though making a film about The Who was, for Stein, the very definition of a dream come true, it also proved every bit a nightmare. The band put up its own money to make it (some $2 million, or eight times what they expected it to cost), then had a falling-out with Stein when Townshend and his mates claimed some of the footage from old TV appearances and home movies used in the film had gone missing. Stein had intended to pay deep-felt homage to his heroes, the band that ushered him safely through his own teenage wasteland, and ended up realizing too late that sometimes the very last people you ever want to meet are your idols.

“Well, when you set the controls for the heart of the sun, you can get burned, ya know?” Stein says. “It was a daunting task. I wanted to create this film to memorialize for the ages what The Who was all about, to somehow capture that energy. But it’s kind of like the yeti: It’s hard to bring that back alive. That chaos they channeled onstage came from a place that was real…Then after everything we went through, kind of riding that tempest, Keith passed away just as we finished. It turned the film in many ways from being perceived as this romp and celebration and crazy home movie into, I think, maybe being perceived as an epitaph. That just kinda changed the tone. We’d been through so much, and we wanted a happy ending and didn’t get one.”

Of the other long-reported conflicts over the making of the film, Stein will only acknowledge they’re a thing of the past, something he cannot and will not talk about.

“It’s just been a long time,” he says. “I think there were differences of opinion, perhaps, about how the project should be made, if it were going to get made. I don’t know. It’s so long ago. Everybody’s decided nobody remembers anymore what exactly happened. The mists of time have cleared away all the rancorous fumes.” He pauses. “I hope.”

Stein had little to do with the new DVD, which features a new interview with a surprisingly reflective Daltrey and a wealth of other goodies; the restoration was the work instead of preservationist John Albarian. Stein became involved only after Townshend’s longtime friend Martin Lewis, who had restored A Hard Day’s Night for Miramax, tracked down his pal Stein and got him to do a commentary and a separate interview for the bonus disc. “Jeff was a little wary, only because he had had a bumpy passage, and he doesn’t talk about it much,” Lewis says. “He’s gracious in the extreme and very proud of his work, but it had been very bumpy.” In the end, Stein agreed to participate only because he thought it would be a “good way to bookend the experience” of making The Kids Are Alright.

Stein had not seen the film for some 20 years. He had moved on, becoming a music-video director when MTV was a fetus; among his works are seminal videos for Billy Idol (“Rebel Yell”), the Cars (“You Might Think”) and Tom Petty (“Don’t Come Around Here No More”). Now, he’s about to join the reality-TV frenzy, having just signed on to work for the production company run by acclaimed documentarian R.J. Cutler (The War Room, Freshman Diaries). He also has plans to make movies out of works by authors James Ellroy and Walter Mosley, though they’re tentative for now—something in the distant future, unlike that first movie that lies in the distant past.

“When I see The Kids Are Alright again, I obviously have a lot of serious flashbacks,” he says. “I bring a lot to it, and it’s not all baggage. I’ve jettisoned pretty much all of it—the overwhelming emotion. God, I try to wipe the slate clean and just see it with fresh eyes and as somebody careening through the experience. But I’m overwhelmed by the sadness and loss at times—of Keith, of John now compounding that, of that whole time and place. Being an old flag-waver, if I ever did anything for the cause, I guess it was capturing those moments so they would live on.”

Stein is asked whether he stopped listening to The Who after the movie was finished—if he needed a break, or perhaps whether the music provided a painful reminder of how a happy experience had turned so bittersweet.

“Oh, I still needed a fix on occasion,” he says, laughing. “I just had to reduce the dosage.”

So, you weren’t scared straight?

“No. But now, I’m back to OD’ing. Now I can roll the windows down and put it on max and roll down the highway screaming.”