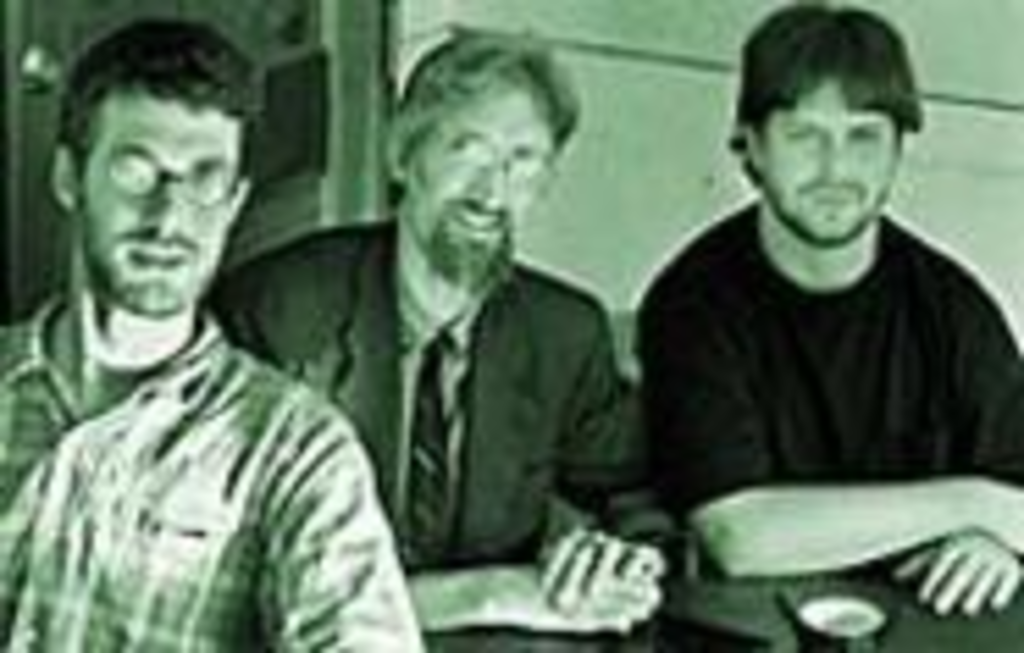 In Lawrence, the fastest growing city in Kansas, the north end of Massachusetts Street — the city’s hub — is under construction. Along the sidewalks, scaffolding and newsprint-plastered windows are signs of new businesses taking over old space. A more aggressive growth is evident in a construction site’s exposed steel beams: new space for retail shops. Interspersed among local shops are chain stores that thrive on name recognition, and to some residents, these nationwide or globe-spanning chains are more of an eyesore than the exposed steel beams that herald the arrival of more chains.

Those critics are concerned about the adverse effect such chains have on the community: “In the modern economic climate, we have multinational corporations going in downtown, basically draining the money supply here,” says John Cougher, a member of the Lawrence Trade Organization (LTO). “People go and pay $50 for a pair of shorts — the money is diverted to (the chain’s) headquarters, and only a small amount of it is reinvested locally.”

Cougher, along with fellow LTO members Kris Olsen and Dennis “Boog” Highberger, is part of the LTO’s effort to introduce a local currency for use in Lawrence and the rest of Douglas County as a means of supporting local businesses and slowing the drain of the local economy.

The effort started when an interest in community service projects led Cougher and Olsen to a Web site that listed Highberger — an administrative attorney — as a contact for a Lawrence currency project. Olsen knew Highberger from when they both worked at the Kaw Valley Independent, a Lawrence newspaper, and the three met in January to discuss the new local-currency initiative.

“Their enthusiasm was contagious,” Highberger says of Cougher and Olsen. “They got me off my butt again.” Highberger was involved in discussions of a local currency called Larry/Konza Hours a few years ago, but the project ended when key people moved from the area.

“We thought a currency project was just big enough for us to handle,” Cougher says. “We came across Boog’s number and it all fell into place.”

The LTO project has moved beyond the discussion stages, and the organization is preparing to introduce REAL (Realizing Economic Alternatives in Lawrence) Dollars in the fall. Its members hope the currency will promote community solidarity and local businesses and give Lawrence residents more control over their economy.

REAL Dollars would be valid only in the Douglas County area with businesses that agree to accept them, thus ensuring that local money will stay local. Each REAL Dollar will be issued to businesses and consumers in exchange for a corresponding amount of regular dollars. The local currency will serve as a simple substitute for federal dollars.

The LTO plans to distribute REAL Dollars in $1, $3, and $10 denominations, which will be accepted as either full or partial payment for a purchase. While the images of many local notables are under consideration to adorn the other notes, William S. Burroughs will appear on the $3 note. The decision to put the Beat writer on the bill was tongue-in-cheek, prompting a play on the words “the $3 Bill (Burroughs).”

“We thought it would be a nice way to tribute him,” Olsen says. “It gives a new meaning to the $3 bill.”

As the LTO accumulates federal dollars in exchange for REAL Dollars, the organization will reinvest money in local business.

“The only thing that gives any currency value is faith,” says Highberger, who serves as the LTO legal adviser. The continued circulation of the federal dollar is proof of this statement: “You can’t take the federal dollar bill somewhere in the federal government and say, ‘Okay, give me my dollar back.’ It’s not backed by anything.”

Lawrence is in a period of growth (from 1998 into early ’99, the job growth rate exceeded the population growth rate for the first time in Douglas County history), so economic development officials argue that chains aren’t hindering the local economy. While Mike O’Donnell, executive director of Wakarusa Valley Development, an economic development organization that provides small businesses with financing, accedes to the argument that national chains move local dollars elsewhere, “From an economic perspective, it’s not a great argument.”

Based on Douglas County sales tax collections, in the first three months of this year retail sales were up 17.7 percent over the same period last year.

“If the pie gets bigger by 17.7 percent from all these big businesses coming in, everyone benefits,” says O’Donnell.

Director of Economic Development for the Lawrence Chamber of Commerce Debi Moore agrees, adding that national chains attract shoppers to downtown Lawrence, where they may discover the many local specialty shops.

However, some argue that as more chains locate in Lawrence, the more the city mirrors other communities. They add that chains also increase competition within their chosen market when they enter an area and sometimes force out local businesses.

“The same stuff you can find half an hour away in Johnson County is now being thrown into the mix here,” Cougher says, “and it seems unnecessary to me.”

It is the individuality of local businesses and the sense of community they foster that the LTO wants to maintain with the REAL Dollars system.

“We really want to help out the community,” says Cougher, who quit his job last month to give more time to the LTO and two other local volunteer organizations. “We think this project will benefit everybody here in town.”

Cougher began his activist efforts at the University of Kansas, where he helped establish a student organization called the Action Faction before receiving his degree in German. Olsen was a member of the Action Faction, and he continues his volunteer efforts at the Headquarters Counseling Center and Audio Reader. Highberger has been involved with numerous volunteer groups during his 20 years in Lawrence.

When the currency is printed in September, the LTO will also print a directory of services offered by local residents — including artisans, craftsmen, and odd-jobbers — who accept REAL Dollars.

A local currency system called Barter Bucks was founded with this objective by the Greater Kansas City Greens in 1993. However, the currency could now be considered defunct: A directory of services has not been published in about three years.

“It’s not actually defunct,” says Jean Rogers, former co-coordinator of the Greens. “It could be out there right now, floating around — and it probably is.”

Rogers offers many criticisms of the Barter Bucks system — that the directory lacked effectiveness, membership in the system was too open, and the Greens’ interest and support waned. “One of the problems is that an organization like this attracts many students, who are very mobile and likely to leave the group,” Rogers says. “You need a continual influx of new people to keep the system going. I’m sure they will have the same thing in Lawrence because they have the same kind of population.”

A successful example of local currency was established in Ithaca, N.Y., in 1991. Ithaca Hours have inspired local currency systems in more than 70 communities across the country and are based on the value of a person’s time, labor, and skills. While this may seem abstract, Paul Glover, the founder of the Ithaca Hours system, describes the currency as more dependable than federal dollars. “You have to have more faith to trade in (federal) dollars, which are backed by less than nothing,” Glover says, except for a $5.6 trillion debt and a military.

The Hours currency helped galvanize the Ithaca community; many of its members participated in a successful campaign to keep Wal-Mart out of their town from 1992 to ’94.

“They take the money out of town,” Glover offers as the reason for the campaign, arguing that Wal-Mart products were produced by child and slave labor and that the company was antiunion and encouraged careless consumerism. “There are clear choices in the marketplace, and shopping is voting.”

Human rights and labor issues also serve as a backdrop for the LTO REAL Dollars, and LTO organizers point to chains as the biggest culprits in such issues.

“(The Gap) is listed in the top three or top five human rights abusers by a number of watch agencies,” Cougher says.

While neither the National Labor Committee (NLC) nor the Global Exchange officially ranks human rights abusers, representatives from both agree with Cougher’s assessment.

Jason Mark, a spokesperson for the Global Exchange, describes the multinational as “an $11 billion company with operations in 50 countries across the globe. In terms of their scale and size, that definitely puts (The Gap) in the top of human rights abusers.”

Cougher’s allegations against The Gap include child and sweatshop labor, as well as skirting U.S. labor laws.

“They set up operations in Saipan, which is a U.S. protectorate,” Cougher says, “so they could sell the “Made in the USA” label on their clothing” while paying these workers less than the minimum wage. Both the NLC and the Global Exchange confirmed these allegations.

LTO members have not yet decided whether they will ask chain stores to get involved with REAL Dollars. One facet of the local currency initiative is to support local business; however, the LTO is reluctant to begin a policy of exclusion.

“I don’t think we are going to aggressively market the currency to global corporations,” Highberger says. “If they want to accept our dollars, that’s perfectly fine with us.”

This is the same attitude adopted by the Ithaca Hours system concerning chain stores.

“We have not placed a prohibition on their participation,” Glover says, “but there is only one chain store participating so far. That is Ben & Jerry’s Ice Cream, which is now part of a multinational — Unilever — and is accepting Ithaca Hours.”

Ithaca Hours and LTO members each have criticisms of the other’s system: Highberger says that by focusing on labor, Hours puts currency in the hands of individuals and not so much the community; Glover contends that the incorporation of federal dollars by the LTO demands that they earn the community’s trust.

“Backing it with dollars will give people good assurance that they could redeem the REAL Dollars if they wanted to,” Glover says. “At the same time, the (LTO) needs to have a clear covenant with the community about any utilization of those federal dollars received.”

To foster trust in the currency and its organizers, the LTO has committed itself to keep its financial records open to the public. As Highberger says, “Our currency will be backed by the value of the community.”