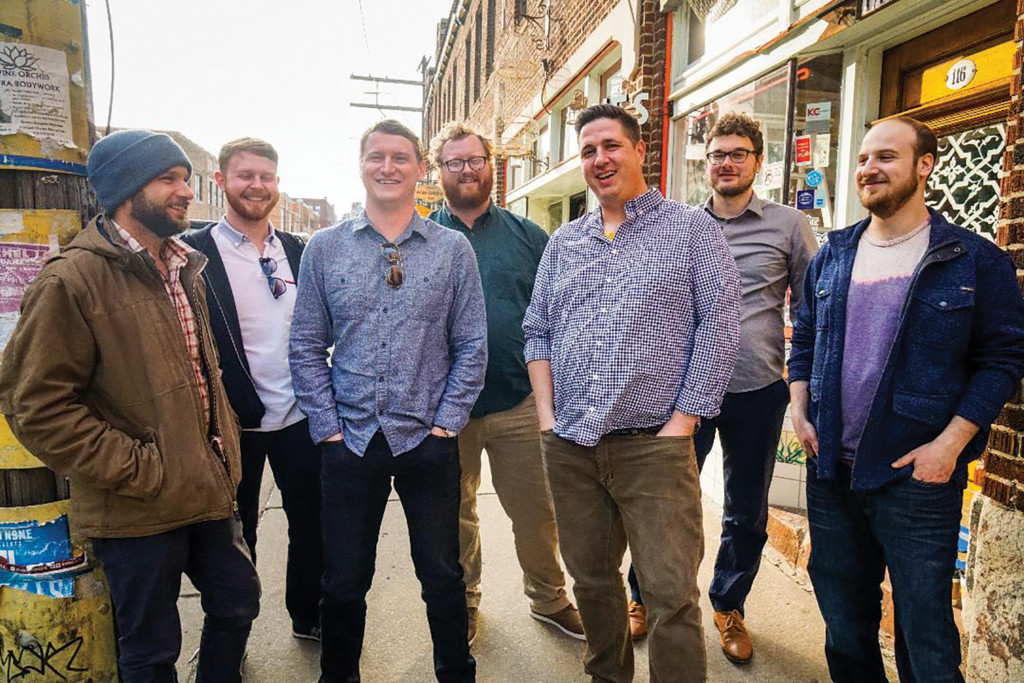 That wasn’t too much of a surprise, given that it wasn’t nominated for one. But Heinlein was there for the awards ceremony.

“It was awesome,” Heinlein says, taking a break from plugging away on his laptop at Broadway Cafe. “It was celebrity overload. You’d turn around and recognize people constantly.” Brandi Carlisle performed, as did Kasey Musgrave. Michelle Obama spoke. He spotted Patton Oswald and “Weird Al” Yankovic in the crowd. Heinlein throws his hands in the air, still a little starstruck all these many months later.

In 2017, Heinlein was looking for new avenues to promote his music. Touring, the traditional route, was out of the question—he’s an associate professor at Johnson County Community College and has two young kids. Heinlein had a few contacts that were already members of the Recording Academy, a membership organization for performers, songwriters, engineers, producers, and other music professionals. The Recording Academy also happens to be the entity behind the Grammy Awards. Heinlein decided to apply to join the organization.

It took a couple tries. Heinlein grew up in Wichita, and he’s spent nearly his entire life and career in the Midwest. Yes, he’s performed hundreds of shows all over the region, recorded multiple albums, formed a handful of bands, kept a residency at The Black Dolphin, played a ton of festivals, and was named The Pitch’s “Best Jazz Ensemble” in 2014. But that wasn’t enough for the Recording Academy.

“They said, ‘We want to see what you’ve done outside of Kansas and Missouri,’” Heinlein says, rubbing his temple. “They literally don’t care how much you play here. It kind of shows you the value they put in this area of the country.”

So Heinlein tracked down every reference he could find to shows he’d played in places like Chicago, New York, New Orleans. Every write-up in any blog, press release, old event calendar—every little blurb and blip. Apparently, that was enough. They let him in.

For Heinlein, one of the advantages of joining the Recording Academy is connecting with other musicians outside his immediate circle, both locally and nationally. (The Recording Academy has about a dozen satellite chapters, and because Kansas City doesn’t have enough representatives in the organization to form its own, most members belong to the Chicago chapter.) Have people given him shit for being part of the big, bad music machine? He shrugs. “Play the game or don’t.”

Discussing dynamics in the local scene, Heinlein is refreshingly candid. He laments the lack of music-centric venues in town, which often leads to audiences not being charged at the door, which he’s not a fan of: “Having a cover is like having an unspoken social contract—you paid to see the music,” he says. “The music means more.” Heinlein is also discouraged by the dysfunction and infighting at many local organizations that purportedly exist to promote Kansas City jazz. “They all do one little specific thing—it’s like getting pecked to death by ducks,” he says.

On the other hand, you can make a relatively comfortable living as a jazz musician in KC without going on the road. “There are a ton of really good musicians moving here, so we are doing something right,” Heinlein says.

Many of those musicians released albums last year. Logan Richardson made one, Boogaloo 7 made one, Peter Schlamb made one. Making Movies submitted theirs for a Grammy, as did Blair Bryant, Julian Vaughn, and Marcus Lewis. Producer Justin Wilson submitted saxophonist Stephen Martin’s album for consideration.

“I remember thinking about Bill Brownlee’s Best Of list [for the blog Plastic Sax], like, Man, I’m OK with the fact we have the fifth or sixth best record of the year,” Heinlein says. “Just because there were a ton of great records.”

Everyday, Forever was actually third on that list. It’s The Project H’s fourth album, and on it the band mustered a fusion of styles, largely jazz-based, that are laced with prog-driven grooves. Heinlein plays trombone, and is joined by Brett Jackson (woodwinds), Nate Nall (trumpet), Matt Leifer (drums), Andrew Oullette (keys), Andrew Stinson (bass), and Adam Schlozman (guitar), plus a few other guests, including a string quartet.

Ironically, this homegrown album was written in Florida, on an Escape to Create grant. Heinlein had intended to do a big-band album with strings. But everything he was coming up with just sounded like Project H, so he embraced it. He says he was inspired by sounds like Maurice Ravel’s string quartet, the string sections on Motown albums, and the 2013 collaboration between Norwegian group Jaga Jazzist and England’s Britten Sinfonia.

The album hit #7 on the iTunes Jazz Charts when it was released in March 2018 and was cheered by the local jazz community. But an upcoming show at RecordBar, on November 17, will be the first time the band has performed the record in full with the string section. (The Project H doesn’t play as often as it once did—usually just every other month or so. “I’m in a spot where I’d rather hang with my kids,” Heinlein admits.)

Heinlein has also been hard at work on a different kind of publishing: He released his first book this past summer. Called Timing is Everything, it teaches improvisation based on swing rhythms.

“There’s plenty of creativity in teaching and pedagogical thought,” Heinlein says. He adds that it might be another year before The Project H makes it back into the studio; he’s still kicking around some ideas for another book.

In the meantime, the Grammy grind looms. Voting for next year’s awards just opened, and Heinlein’s inbox is filling up with “For Your Consideration” requests. Decisions, decisions.

The Project H with Strings