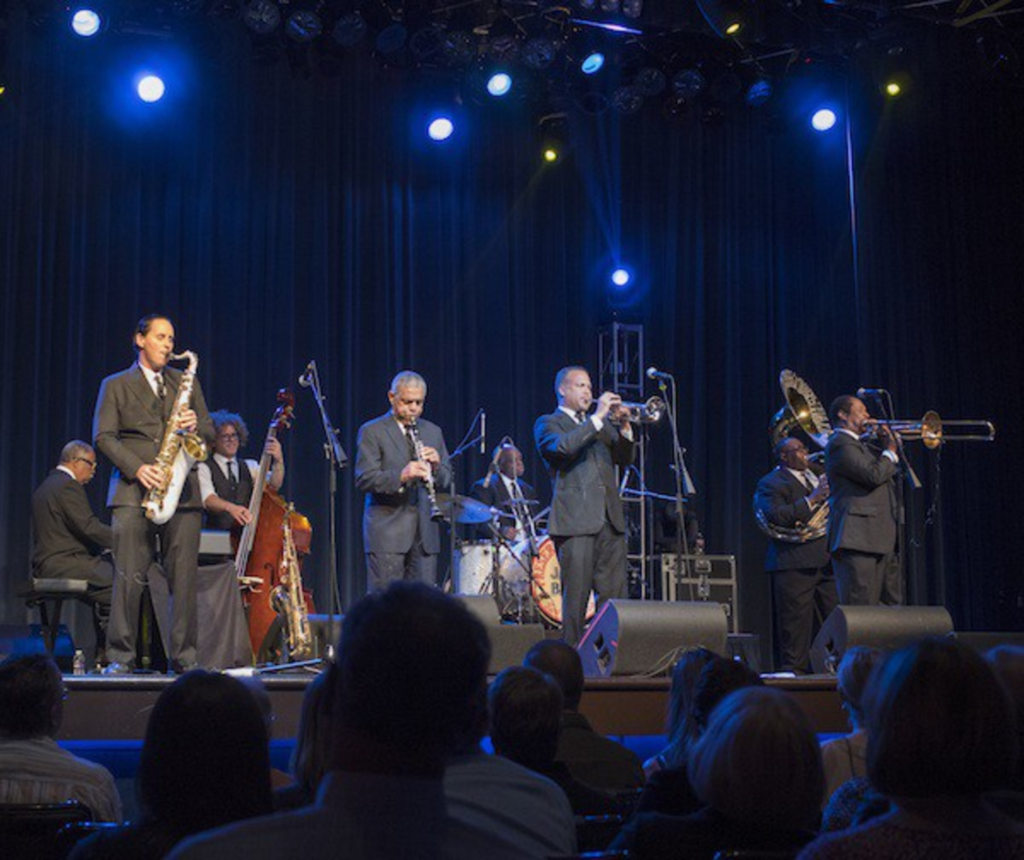 The Preservation Hall Jazz Band (PHJB) is all about joyous music. It’s all about making the couple of hundred people in the audience instinctively sway in their seats, rock their shoulders to and fro, bounce their head or a foot, and sometimes throw an arm skyward with glee. Classic Kansas City style swing can do that, too. But where Kansas City jazz features saxophones and a supple bass, PHJB drives the music with a tight and bold brass, blowing with no-holds-barred in-your-ear brashness, all laid over the energetic deep notes of that tuba. And that was what the audience at last night’s PHJB concert at Harrah’s VooDoo Lounge got last night.

This style of music developed more than a hundred years ago, but PHJB keeps it vibrant and fresh with eight outstanding musicians, original compositions, modern arrangements of classic songs, and showmanship. Last night, Mark Baud’s trumpet wailed, crisp notes not trying to reinterpret or reinvent anything, just wild and bluesy New Orleans style swing. Behind him, Freddie Lonzo on trombone, Clint Maedgen on tenor sax and Charlie Gabriel on baritone sax (Gabriel played clarinet the rest of the night) riffed on multiple occasions, their short musical phrases pushing Baud harder. Ronell Johnson, always in motion with a tuba wrapped around him, was blowing deep notes that bounced through the music in a way you rarely hear anymore outside of New Orleans. It was, by all accounts, transporting.

“Halfway Right, Halfway Wrong,” and original off the latest PHJB album, began with an engaging call-and-response between trumpet and trombone. Then Johnson put down his tuba to sing. His large frame swirled, danced and glided gracefully across the stage. Later, when trombonist Lonzo bounced to the mic to sing his original composition, “Rattlin’ Bones,” he shook legs and belly like a vaudevillian with a novelty number, and called to the audience to stand in response (it did). But none of it felt contrived or trite – the sincerity of the music and integrity of the performance wouldn’t allow for that.

Drummer Joe Lastie Jr. showed his chops with a frantic solo in the encore, and that’s where bassist Ben Jaffe could first be heard. Jaffe leads the PHJB, in a very subtle kind of way. (Over fifty years ago his parents opened Preservation Hall, a gathering place for musicians and tourists not unlike Kansas City’s Mutual Musicians Foundation.) For the most part, Jaffe seemed content to let his sound fade into the background, and let his bandmates have most of the attention.

Baud dominated a contemporary take on “St. James Infirmary” with his inventive blues-laced trumpet (his singing was less inspiring). He also commanded the final instrumental through rapid-fire fingering on his solo. Trombonist Lonzo riffed behind singers, sounding much like Al Grey in some of Count Basie’s finest orchestras. Gabriel’s clarinet soared with the brass, bringing a distinctly New Orleans signature to the music. Outside of his solos, Maedgen’s tenor sax was often overwhelmed by the brass. Johnson’s tuba consistently provided a unique base on which other instrumentalist built. Pianist Rickie Monie played a rolling solo on “I Think I Love You” and played with a hint of boogie in the instrumental encore.

This all made for a scintillating show, one which listening to the music was as entertaining as watching the players create it. When the audience started swaying, it was still early in the show, when the Preservation Hall Jazz Band collectively blew its first few notes. The audience members didn’t stop swaying for the next 75 minutes, proving there’s life in this century old sound.

Leftovers: The evening opened with 45 minutes by Kansas City’s Grand Marquis. Their mix of jump blues and novelty style songs backed with enthusiasm – but an often indifferent R&B beat – was a fine opening complement. But their performance, while fun, did not compare favorably to the tight polish and skill of PHJB.

Setlist (if you know the instrumental titles, say so in the comments):
Go to the Mardi Gras
Tiger Rag
Tootie Ma is a Big Fine Thing
Shake That Thing
Come With Me
Halfway Right, Halfway Wrong
Instrumental ?
St. James Infirmary
I Think I Love You
Rattlin’ Bones
Instrumental ?
—
Instrumental ?