The Pitch‘s Crap Archivist finds a holiday gift from 60 years ago: tourism 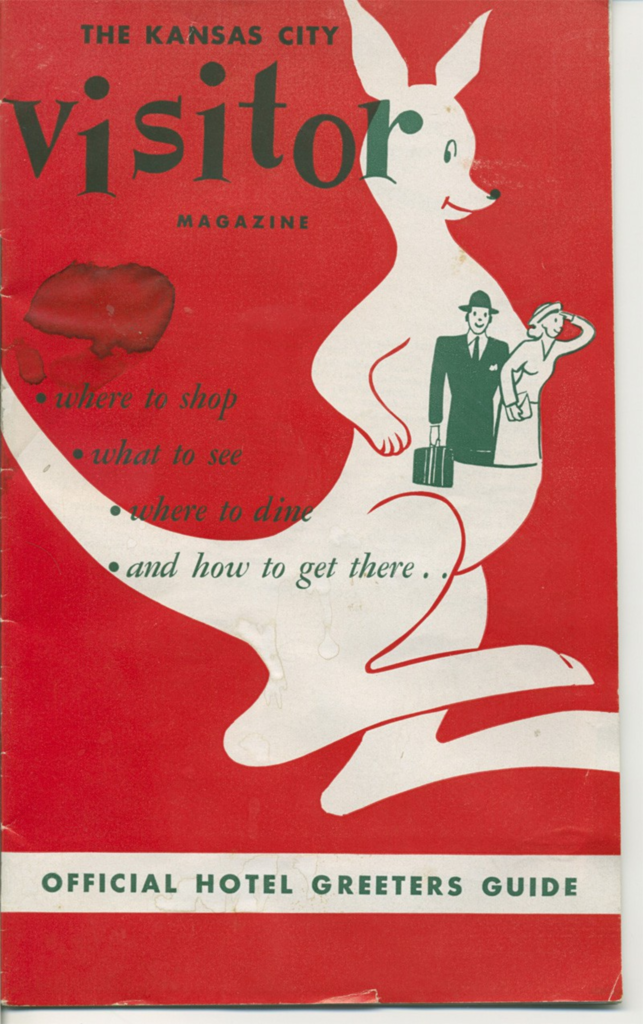 So you’re visiting Kansas City in December 1949. Perhaps you’re a conventioneer: The Missouri Bottlers of Carbonated Beverages hits town December 4, and the Potato Association of America follows four days later. You could be playing in the Big Seven Basketball Tourney on December 17 or, if we’re lucky, you might have time-machined back to warn that in just two years, a flood will destroy the Fairfax Airport, and Stockyard President Jay P. Dillingham will somehow convince everyone to build the new one 25 miles out of town. Maybe you just want to know why a kangaroo adorns the cover of an ad-intensive guide to KC’s urban attractions during Harry S. Truman’s administration.

That guide, called The Kansas City Visitor Magazine, turned up recently at a Prairie Village estate sale. With one look through the 60-year-old Christmas-colored booklet, the Pitch‘s Crap Archivist knew that he had to have it — and share more of it than could fit in the usual space. There’s no solving the kangaroo mystery, but that’s beside the point when so much excitement is on display.

To the 1949 KC tourist, the Visitor promises sophistication and then attempts to back it up with quaint ads, baffling illustrations and weirdly sober glamour shots, not to mention rah-rah infotainment copy and an array of happy-go-lucky clip art. Let’s see what the Visitor and this great city have to offer. Please keep your legs inside the pouch until the kangaroo has come to a complete stop.

If you’re in the smart set, there’s Halls, Macy’s and the long-gone Harzfeld’s — “the famous name on Petticoat Lane,” a local institution that spread out to the Plaza in ’54, to the malls in the ’60s and to history itself in ’84 when the stores shuttered and the downtown (11th Street and Main) branch’s Thomas Hart Benton mural was shipped off to the Smithsonian. In the Visitor, Harzfeld’s promises that “the tiny tot, teen-ager, career girl and grand lady” will each find “an exquisite creation from a world-famous designer.”

If you’re a man who likes to shop, meanwhile, you can pick up Arrow shirts and Dobbs hats at the Palace Clothing Company at 12th Street and Grand, which the Visitor insists is “a mecca for masculine tastes.” (To its credit, the store doesn’t include an image in its ad of a sharp-dressed Mohammad.) Happening fellows are also encouraged to visit Tom Houlihan, at 208 East 11th Street, where “You’ll find everything for the sterner sex” and “your suit will prove a revelation in perfection.”

Once you’re decked out in your KC finery, why not hit The Famous (1211 Baltimore) for cocktails and “delightful music by the nation’s top Hammond organ artists”? Or the Crown Room of the La Salle Hotel (Linwood and Harrison), with two-for-one drinks from 5:30 to 6:30 and “the hilarious Hurdle Dance every Wednesday night”? Then, for the meal itself, you can’t beat the “plushy surroundings” of Eddy’s Restaurant and Lounge (13th Street and Baltimore), “one of the mid-west’s most ultra-modern supper clubs.”

We would suggest the Dining Terrace of the Hotel Ambassador (36th Street and Broadway) for dessert, but the best the Visitor bothers to claim is that “Delicious home-cooked pastries are a must.” Apparently, then, you have to lug your own pastries from home — or else the chef lives there, Ratatouille-style. Your best move is to kangaroo to “smart midtown” for Club Interlude’s “Spotlight of Stars” entertainment: “lovely, mirth-provoking Jeanie Leitt, singer of the risque in a delightful individualistic manner.” Sure, Putsch’s, the Crown Room and others also offer supper spectaculars, but only Leitt and Club Interlude guarantee that latest rage in entertainment: individualism! Take that, you commie Rockettes!

At Municipal Auditorium, Gae Foster’s Skating Vanities of 1950 will cost you $2.50 max for a “$1,000,000 Spectacle” and a company of 140 — more than the number of Americans who will see a professional ice-dance show in 2009. Many of the grand old theaters have shut down, but the Music Hall is bustling. There, during just one month, the marquee includes the Vienna Boys’ Choir; Charles Laughton; the shows High Button Shoes, Enchanted England and Detective Story; and the vaguely identified “Philharmonic Orchestra.”

Here’s a heartbreaker. Before the tax base shifts south, Swope Park sounds like something Ken Burns and Teddy Roosevelt might dream of: “Third largest park in America, 14,000 acres of magnificent woodland, one of the most picturesque places in the country.”

“WITH ALL GOOD WISHES FOR A PLEASANT VISIT”

This all sounds swell today, when dinner entertainment is limited to the New Theatre hosting Gary Burghoff, and the Blue Ridge and Metcalf South malls that once cradled those Harzfeld’s satellites are barren. But for all of the Visitor‘s good cheer, in 1949 the Chamber of Commerce itself could trumpet this town only timidly.

In a welcome-to-town letter printed on page 2, chamber President Herbert H. Wilson blows his first paragraph, explaining that his organization won’t have the answer to every visitor’s questions. From there, he opines that we Kansas Citians make up the heart of America “not by geography alone” and then brags that we’re “the gateway to the great southwest.”

Only in his third and final paragraph does Wilson dare to suggest that this might be a fine place to visit. He makes no claims himself, instead crediting earlier visitors’ testimonials to the beauty of the neighborhoods and boulevards as well as to “cultural assets as fine as would be found anywhere.”

His spiritless conclusion: “We want you to learn to know and like Kansas City, too.”

Even in ’49, KC had an inferiority complex. How could Wilson ever know what a thrill it would be for us today to visit his swinging little town?