The Pitch rips it up and starts again 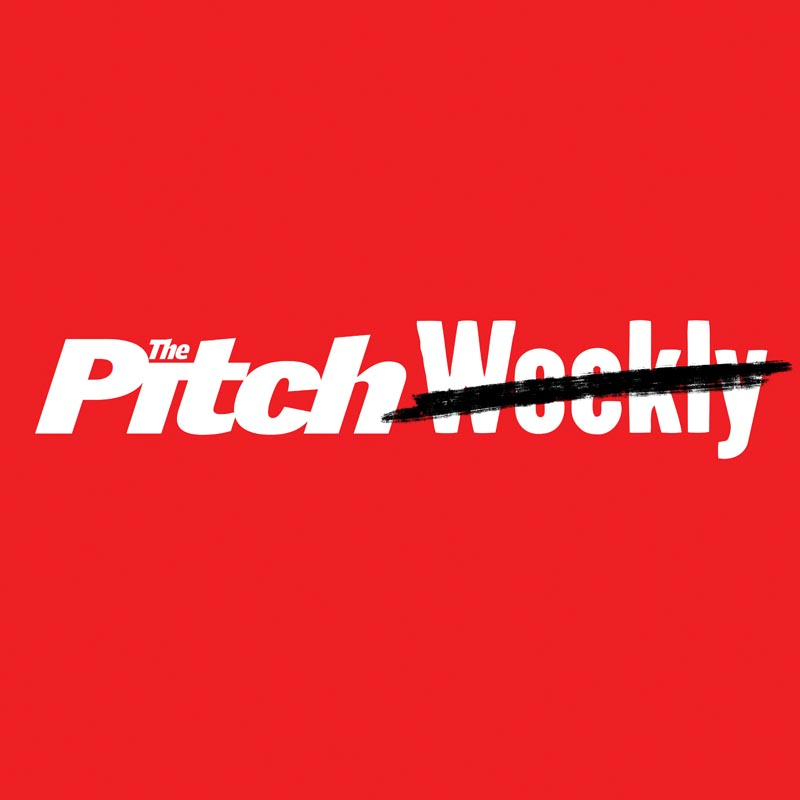 Night after night, the journalist’s stress dream assumes many forms. Teeth you haven’t gnarled to unsexy points in your waking life explode into powder. Elevator doors open to reveal a chasm you’re too late to avoid stepping into. You accidentally call Clay Chastain.

Compared with these monochromatic chills, the dream I had last night was downright reassuring. I had approached the office sink to rinse a coffee mug before depositing it in the dishwasher. (So lifelike.) But the tub was full of plates, each dirtied by pieces of frosting-heavy sheet cake. (There is rarely cake here, and none is ever left on a plate.) As I washed the plates, the garbage disposal sent chocolate water pooling onto the floor at my feet. (We don’t have a disposal.) I opened the cabinet to look at the pipes, but in their place was a bright aquarium full of … all the writers I’ve known over the past 20 years at The Pitch. Who looked, by the way, sleek and well-compensated and in no way were drowning.

This is not the dumbest part, I am sorry to say.

As people gathered around my discovery, I said, “Is this the future?” And then I woke up.

Clearly, this is not what clinicians call a stress dream, even if clinicians should be consulted. It’s not a harbinger. It’s not a seance. It’s simply the knocked-out brain of an alt-weekly editor who, given his druthers, would recall to duty most of those writers (art directors and photographers, too), regardless of their current level of interest in print media, and keep the cycle going indefinitely. Coffee, stories, print deadline; coffee, stories, print deadline. Some blogging, some whiskey. On and on, through mayoral administrations and crime spikes and chef defections and gallery openings and band reunions, week in and week out.

Now, though, we’re about to try a different cycle: month in and month out.

With this issue, The Pitch — an irregularly printed flier from the postpunk record-store underground that became a weekly stick in the mainstream eye — unyokes itself from a decades-old model in favor of 12-times-a-year publication. We’ll have glossy covers. We’ll have new layouts on slick pages. You could almost put us on a coffee table.

Full disclosure: Not my druthers. Not at first, anyway. When someone — your mostly benevolent corporate masters, for instance — suggests that a prettier, classier-looking product might ultimately replenish your newspaper’s long-light strongbox, you initially hear the idea as: You will tell fewer stories.

Then you say that sounds fine — because mostly benevolent; because survival; because coffee, stories, longer deadline — and you remember what good magazines do. They tell good stories, some of them much longer than what newsprint budgeting and weekly deadlines and page counts allow. Soon enough, your dreams about the dynamited gums turn more whimsical (until your first deadline for the new, never-done-this-before publication peers at you over the calendar’s edge). This is the future, and you still have your teeth.

The Pitch is keeping its bite, too. Yes, we’re graduating from thin, smudgy paper to a more fashionable stock, and we’re eager to publish excellent photos to go with our coverage of arts, food, drink and entertainment. But we will, in print and online, continue to challenge local and regional players and institutions. Challenge them to clear up what’s opaque. Challenge them to do better. Sometimes we do this by mocking, sometimes by shouting. Sometimes we hold up a person who is doing the right thing, and that’s a challenge, too.

This has never been about criticism for its own sake, and it doesn’t come from a weepy, “save the children” impulse. Given our history of alternative journalism — different from the daily, not TV, not radio, not a civic cheerleader, committed to accuracy and transparency and truth — we’ve always been close to the ground. So we don’t like potholes. And in this town, potholes lead to steel plates, and steel plates lead to tax-increment financing, and what is that anyway. Among other things, we still mean to give civic leaders bad dreams about potholes.

The first week of April, our debut monthly edition arrives. You’ll find it wherever you’ve always picked it up: almost certainly within view of a pothole that needs fixing. We’ll look better than we’ve ever looked, but we’re not about to get too far from the street.