The Penny Pitch was free but it wasn’t cheap 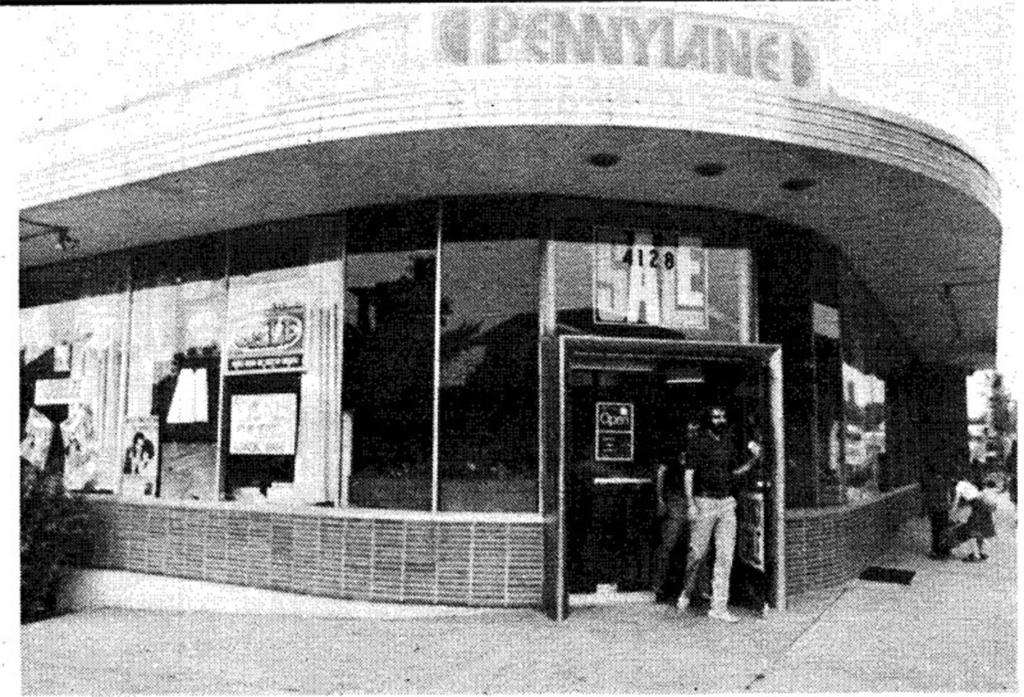 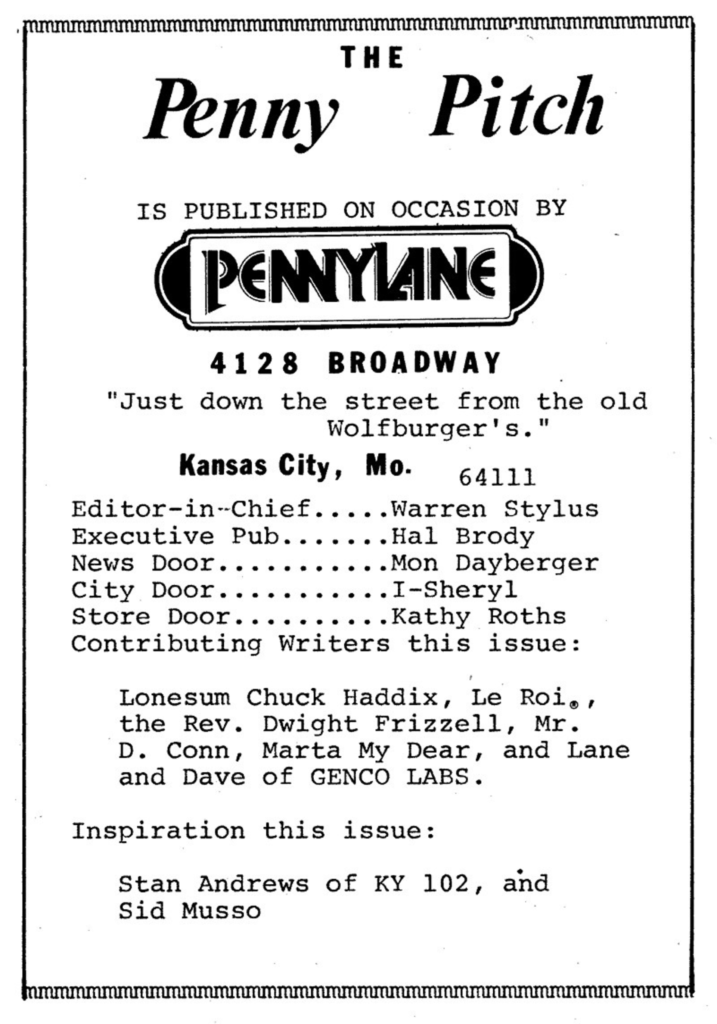 Discovered at: Distributed free at record store three decades back.

Representative quote: “Debbie LaReau of
Kansas City was judged first out of a field of one vying for a 102 second sweep through the store. Her entry was a discrete [sic] ‘KY 102’ tanned on her thighs.”

This freebie 12-page lark, put together in the basement of a record store, is the gritty seed that grew — in fits of cash and ambition and uncertainty — into the weekly that you’re looking at right now as you scarf your d’Bronx or sit in the park or try to look like you’re totally cool while sitting at a bar by yourself. (Maybe you’re online. I’ll write shorter sentences, just in case.) Founded and typed up by witty malcontents not yet ready for the Reagan ’80s, the Penny Pitch celebrated great records and a great rec­ord store. As the lead article, “Store Sits on Warehouse,” points out, PennyLane had just moved to its biggest space yet, allowing owner Hal Brody to retail what he’d once had to sell by mail: “hard to get jazz or blues record[s] that would be unobtainable or at best a special order in most record shops.”

The article points out that 1980 wasn’t an especially good time to sell records. “Economic conditions surely dictate that a small business be more than average to stay in business,” writes “Warren Stylus” (actually Don Mayberger, the paper’s first editor; see interview on page 9).

Incarnations of both PennyLane and its Pitch have managed to stay afloat another three decades, despite steep revenue declines in recorded music and print media.

The front page of this first Pitch touts another story, that of radio-contest winner Debbie LaReau, who was given 102 seconds to raid PennyLane for all the music she could carry. She lugged off 113 LPs, but she didn’t find the one she wanted most: McCartney II, that year’s helping of ear puke from the former Beatle. After her time had elapsed, PennyLane and KYYS 102.1 staffers swapped her the Paul McCartney record for another from her haul, allowing her to groove to “Coming Up” anytime she wanted. (How long would that last? Probably 30 seconds into track two, “Temporary Secretary,” which sounds like a robot singing over the blipping bank of TV monitors on the old game show Press Your Luck.)

Turns out, some people who worked here did all right.

Chuck Haddix, 1980 Penny Pitch contributor, today writes and teaches and is well-known as the host of KCUR 89.3’s The Fish Fry, a broadcast of jazz, blues and soul that might be one of the best arguments for living in Kansas City.

The Rev. Dwight Frizzell, after palling around with Sun Ra, founded BCR, the metro’s best interstellar Afro-jazz-funk band, and he has continued to record innovative music. (His 1976 LP, Beyond the Black Crack, a peerless improv-freakout sound collage, remains influential and collectible.)

Brody became the owner-operator of the East Bay Express in Oakland, California, after purchasing it from Village Voice Media, which owns The Pitch. Later, after The Pitch dropped Penny from its name, the masthead went on to contain, among many other names, ex-Kansas City Star smirk Hearne Christopher Jr., the paper’s executive editor in the late ’80s, and Donna Trussell, the fiction writer, journalist, cartoonist, and ace blogger who served as editor through much of that decade. The roll also includes excitable film reviewer Shawn Edwards and professional conspiracy theorist Jack Cashill.

If you exclude the paper’s pre-Internet personals, the jabbing record reviews by one-name local legend LeRoi (see interview on page 10) stand as perhaps the most notorious long-running Pitch feature. In every issue (well into the ’90s), PennyLane’s opinionated rock-and-roll fiend dished talking-point-sized takes on fistfuls of the latest records (and, eventually, CDs).

In the first issue, he dismisses the wretched McCartney II, the very record that lucky LaReau so coveted. “CBS paid millions of $$’s too much for this,” LeRoi concludes (and begins — that’s the entire review). He’s similarly concise when regarding Sammy Hagar’s Danger Zone (“One of his finest efforts yet. Powerful rock that will probably go top 40”) and Squeeze’s Argybargy (“Great Record! This is the one McCartney should have done”).

In later years, LeRoi’s column would co-opt a John Hiatt album title to become “Riding With the King.” His pen sharpened, and he learned to exult in the freedoms that writing for a paper like this one (still) allows. Taking on a David Byrne solo record deep in the ’80s, he complains, “Enough of this Latin shit.” A young Crap Archivist found this inspirational.

At first, Brody, Mayberger and their band of music-obsessed basement dwellers missed the inviolable first rule of alternative newspapers: Make it clear that your town is the world’s most exciting place to be. (They understandably focused more on KC’s best record store.) The first issue’s concert listings hardly compare with the beefy notes on events and venues in the paper you’re holding (or scanning online), but they made up the best compilation of nightlife’s who-where-when in the days of cut-and-paste media. They also demonstrate that punk and new wave took forever to hit the Midwest.

Venues such as the Opera House and Off-the-Wall Hall in Lawrence are long gone. The paper that eventually became The Pitch has also outlasted KY 102, vinyl’s dominance, McCartney II, lively classified-ad sections that once boosted weeklies past the 100-page mark, and the American habit of record stores and print newspapers.

Our old incubator PennyLane is now Streetside Records, still a fine store. For the past month, it has been decked out in banners and posters promising 50-percent off most merchandise. So many customers have been alarmed that the employees taped up a sign in the doorway explaining that this is just a sale, not a closing. Here at The Pitch, we’ve had a sign up for a spell advertising space for lease. Don’t worry. We ain’t closing, either.