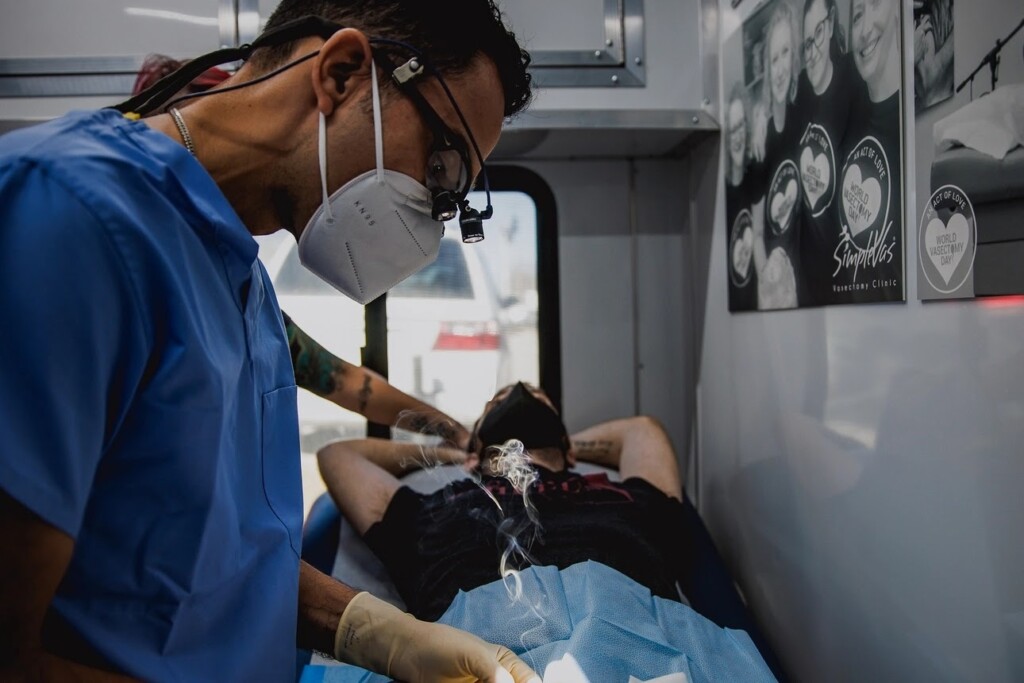 Performing a vasectomy in a touring medical lab. // Photo by Chase Castor

Never mind the ice cream man. Board-certified physician and reproductive care expert Esgar Guarín, MD (Dr. G), is taking convenience to the next level and has done numbers in the world of permanent sterilization with the help of his very own mobile vasectomy clinic. After moving on from a previous medical career in Maternal, Child, and Reproductive Health, the doctor decided to dedicate his time and talent to work at a clinic of his own in Des Moines, Iowa, and focus entirely on his title as a vasectomist.

Dr. Guarín took the time to chat with us and give us the run-down on his work, experiences, efficiency, and of course, the motivations behind his vasectomy clinic on wheels.

The Pitch: Firstly, how was the idea for your mobile vasectomy clinic born?

Esgar Guarín, MD: I belong to a non-profit organization called World Vasectomy Day. We travel the world teaching people to do vasectomies in a very simplistic way and mostly providing vasectomies pro bono in many countries. This experience is what made me consider building a mobile vasectomy clinic. In those countries, you do vasectomies in that kind of setting because it’s easier to take the surgeon to different places than it is to mobilize it to an area where you can find the surgeon, especially with a procedure that is so simple.

I trained a gynecologist down in St. Louis years before on how to do vasectomies. For 2021, we took the mobile vasectomy clinic from Des Moines to New York City. We drove through Kansas City, Indianapolis, Cleveland, Pittsburg, Philadelphia, and then to New York and spent about three or four days in the city. We parked the mobile unit for a whole day in Times Square. I was a bit skeptical because in New York City, anybody can go out naked in the middle of Times Square, and nobody cares. But we did stop some traffic, which was fantastic. When you put a big box on wheels with a bunch of printed sperm around it and the words “vasectomy” and “mobile clinic,” people become interested.

When you’re on your vasectomy tour, do you have a limit to how many procedures you do in each city?

The limitations are based on the time I like to have with each patient. So normally the procedure takes me no more than 15 minutes. In my office, I set them up every 30 minutes. So they come in, and they spend half an hour with me. Ten minutes is the procedure, the other 20 minutes I leave for chatting. The only limitation is that I only do the mobile unit, which I operate on my own, in the winter. In the summer, I don’t like doing them. It gets awfully hot and uncomfortable for the patient in the mobile unit. 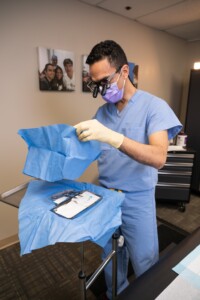 The doctor is in session. // Photo by Chase Castor

So, what are you talking about for 20 minutes?

Well, my mission is not just to provide vasectomies. My mission is to provide reproductive experiences. I’m not just snipping them, I’m making men more aware of their responsibility in reproduction. I need to have that face-to-face contact to have those conversations with them that are meaningful about their participation in reproduction. When an individual makes a decision about not having children or not having any more children, they are giving up an important part of who we are as human beings which is our ability to reproduce. You have to recognize and highlight the importance of that because that individual deserves that recognition. Once you elevate that decision, they feel not only recognized but empowered and they will reproduce that message amongst other men.

What do you say to patients who feel unsure about getting a vasectomy?

By the time patients come to me, they have made their decisions already. I don’t need a pitch to push them over the line to get them to make their decision. I think the majority of men want to participate but don’t know how or think the process it’s too complex. That is why it is important to elevate that conversation. The guy comes in, it’s a smooth process, has a smooth recovery, it’s effective, and that individual will multiply the message. Then we have more men doing the right thing.

What does the procedure itself look like? How about the recovery process?

It usually takes 10 or 15 minutes under local anesthesia and the recovery period is 48 hours. For tubal ligation, for women, that’s usually up to a 10-day recovery time. Whereas a guy only takes a weekend to recover, hence the reason I do it on weekends.

How did the ruling of Roe v. Wade impact what you do?

When the Supreme Court came out and announced its decision concerning Roe v. Wade, we saw in the first 48 hours a 250% increase in the traffic to our website. Within those 48 hours, we also saw an increase in people signing up for a vasectomy by 50%. I was normally doing about 40-50 vasectomies every month, and in July we did 79 vasectomies.

The biggest increase I saw was men in their mid to late 30s who had made the decision not to have any children a long time ago. So these are guys who didn’t want children, who didn’t have any children, but did nothing about it and were relying on their partners entirely at the time for contraception. Then they realized they wouldn’t be able to fall back on abortion after that happened concerning Roe v. Wade. So there was an increase of 20% in those patients. 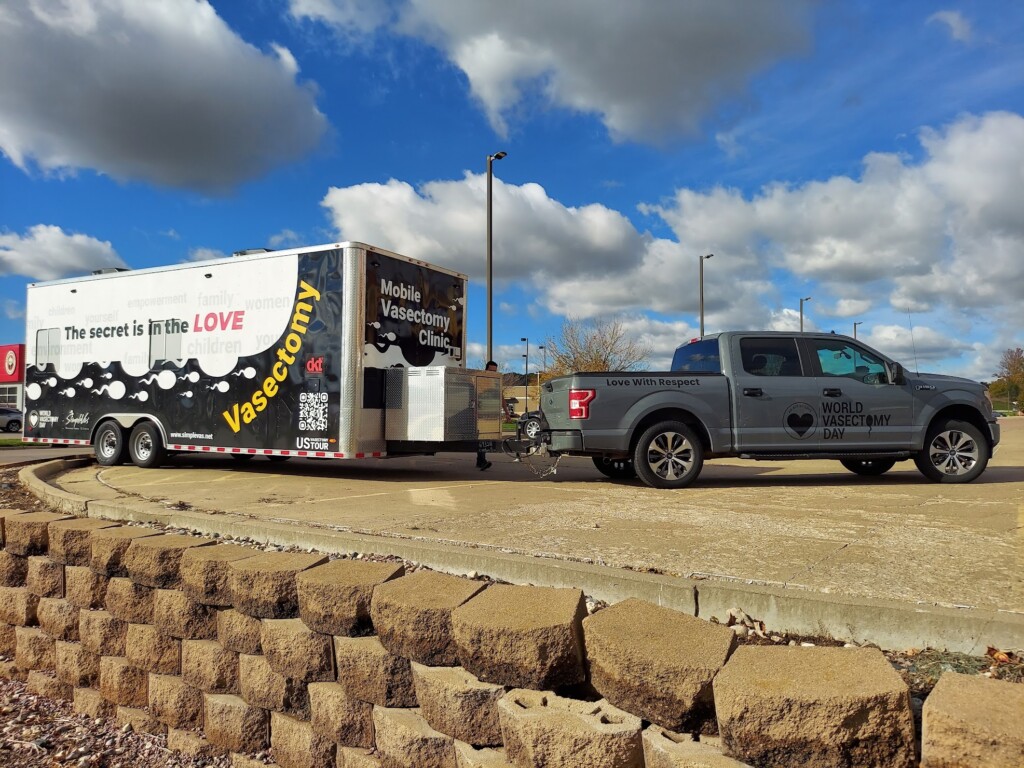 Mobile vasectomy clinic on the road. // Photo by Chase Castor

It was stated in Politico that you performed a vasectomy once on yourself, on camera. Would you mind telling us about that?

It sounds like I have nothing better to do on a Friday night than sterilizing myself. I finished my clinic for the day, and I called my wife and told her I needed her with me so I could do the procedure. So she came in, I set up my two trays of instruments, and I had her record it.

I’ve always had a premise in the practice of medicine that I would not do or suggest a medical procedure to a patient that I would not do on a family member or myself. Obviously, I have a ton of empathy for my patients since I have the same equipment as them, but it’s not at the same level when you’re doing tons of these procedures over the years. In my particular case, I felt compelled to get that level of understanding.

What is your mission?

We are in a very unbalanced world regarding men making permanent contraceptive decisions. According to the estimates of the United Nations in 2019, 290 million women worldwide reported relying on tubal ligations as permanent contraception, whereas only 16 women replied on vasectomies. The comparison is ridiculous, which means more women are putting themselves at risk when it comes to those procedures. Don’t get me wrong, I’m not saying gynos are butchering tubal ligations left and right, but we should not ignore the risks of abdominal surgery when there is an alternative that takes 10 minutes under local anesthesia. If we can at least reach a point in the U.S. where it is 1-1, I think we would show a lot of equity and equality with contraceptives in men, which is my personal goal.

I’m not advocating for every single guy to have a vasectomy. What I’m advocating for is that when the time comes for a permanent decision, this method should be used instead of tubal ligation. If there is a surgical procedure, consider why you would go with the one that requires an operating room and poking around in an individual’s belly when you can do one in 10 minutes in an office. I’m trying to demonstrate here that the participation of men in reproduction beyond contraception is an easy one, and it’s due.

You can learn more about the work of Dr. Guarín here.