The New Theatre’s All Shook Up softens the rock 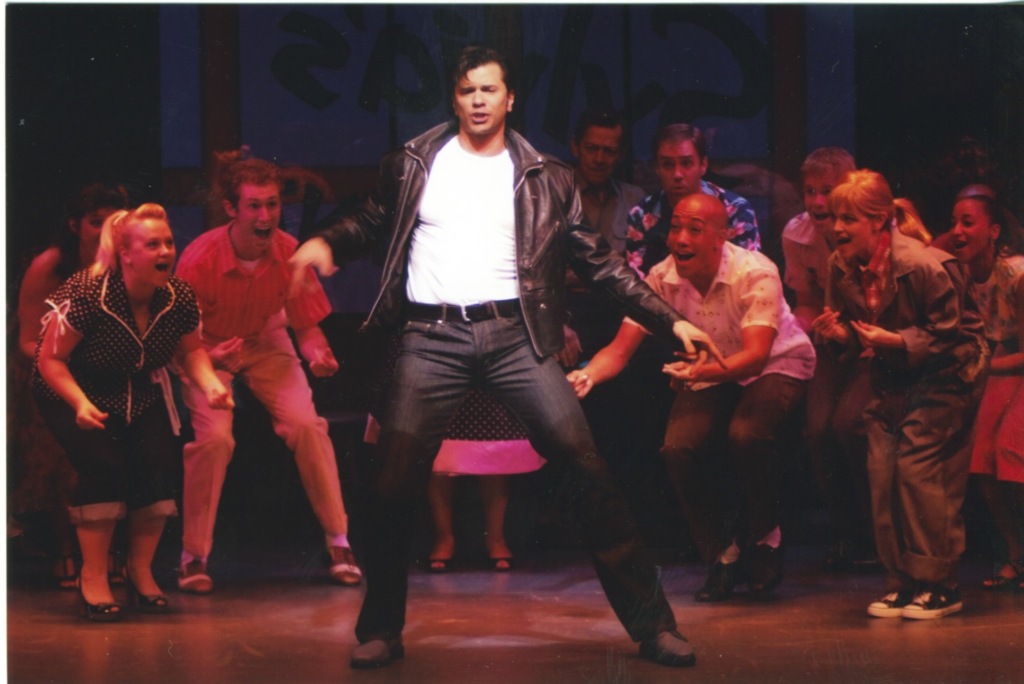 Imagine an Elvis movie that’s nothing but the goofy highlights of Elvis movies: a sexy drifter, idiotic romances, production numbers even more unclear than most about whether all the impromptu singing and dancing is happening within the reality of the story. Then imagine it staged with more musical-theater slickness than rock-and-roll abandon, and you’ve got All Shook Up, this year’s big ol’ summer musical at the New Theatre, less a salute to Elvis than to his shitty movies. Neither a parody nor a tribute, All Shook Up tries to create fun without making fun, hitting ancient story beats with greater craft and wit than Fun in Acapulco bothered with.

Joe DiPietro’s book strings together 20-plus Elvis songs, sometimes spacing them just seconds apart. Some are immortal (“Burning Love”), some obscure (“Let Yourself Go”), some played out (“Teddy Bear”), and some were already showtunes well before the Broadway arranger got hold of them (“If I Can Dream”). For a plot, DiPietro mashes together some Twelfth Night, some Bye Bye Birdie and too much Footloose — though this does present a chance for Dodie Brown, who plays the town’s music-hating septuagenarian mayor, to croak “Devil in Disguise.”

So it’s Elvis Movie 2.0, lacking the real Elvis. DuBail plays a generic “roustabout,” a greaser who walks like the king, talks like the king and rocks like an acceptable musical-theater facsimile thereof.

The key question: Can watching this possibly be more fun than a couple hours spent YouTubing the originals?

Mostly, yes. Especially when the showstoppers get to stopping. “C’mon Everybody” (from Viva Las Vegas) is a stomp-along classic that, in a sensible world, would be blasted at weddings and ballgames. DiPietro makes this novelty the show’s splashiest dance number. Director Richard Carrothers packs his stage with a crisp chorus, his ensemble dancers leap forward for memorable solos, the band kicks up twice the racket you’d expect, DuBail thrusts sinuously, and you’re reminded how much better rock was before it split from roll. Here, All Shook Up almost bests Viva Las Vegas — almost. For all of Carrothers’ inventive staging, he lacks those shots of Ann-Margret’s caboose.

“It’s Now or Never,” which was always about as Latin as ballpark nachos, improves greatly thanks to Ben Britton’s satiric belting, and a clever call-and-response between Deidra H. Brooks and Erica Dorfler transforms “That’s All Right” without insulting the original. A duel pitting “Hound Dog” against “Teddy Bear” is great fun, if one-sided: Cutesy-poo “Teddy Bear” gets its head chewed off, as it would even without the talented Jennifer Mays investing “Hound Dog” with a gritty holler.

Not all the songs fare as well. In the movie, “Follow That Dream” is a peppy blast. Here, it’s flattened into a routine Broadway self-actualization ballad as, in an engine shop, DuBail’s Chad croons it to Natalie (Jessalyn Kincaid), a tomboy mechanic who swooningly takes the number’s message to heart. In the movie, the real Elvis sleep-sings it from flat on his back on a beach towel, lolling around like a cat who ate too much. Advantage: All Shook Up.

Like most New Theatre shows, All Shook Up is elevated by superior comic performances. The ersatz Elvis inspires no fewer than five pairs of lovers to hook up over the two acts. Mays, Brooks and Britton stand out because they’re inventive but also because DiPietro gives them something to work with. Kincaid, on the other hand, succeeds in spite of a silly cross-dressing plot that hides her effervescence behind a thick, masculine voice and a painted-on hobo beard.

To his credit, DuBail is no Elvis imitator. He has the sneer, the moves and the attitude, but he sings with a lighter touch. Soon after blazing into the prim Kansas town he’s about to change, DuBail’s Chad announces, “I’m a roustabout with a song in my soul.” Panic ensues, kids start necking in public and the mayor’s son is caught up in an interracial romance.

The joke seems to be: How could anyone be frightened by such a sweet-natured character? Because there’s no rock-and-roll spirit here, Chad spreads love and sorts out problems everywhere he goes. He’s a Peter Pan figure, a Johnny Appleseed, an itinerant Mary Worth.

If the real Elvis couldn’t keep the spirit going, there’s no reason to believe that Broadway might have. But I can’t help but wish that somebody, in the mounting of this lark, had aimed for the danger, sex and abandon of Elvis ’56 instead of the upbeat self-help of “Follow That Dream.” All Shook Up is a lot of fun, a crisp and polished production that’s a credit to everyone involved. It’s also more about the power of positive thinking than it is about the king of rock and roll.