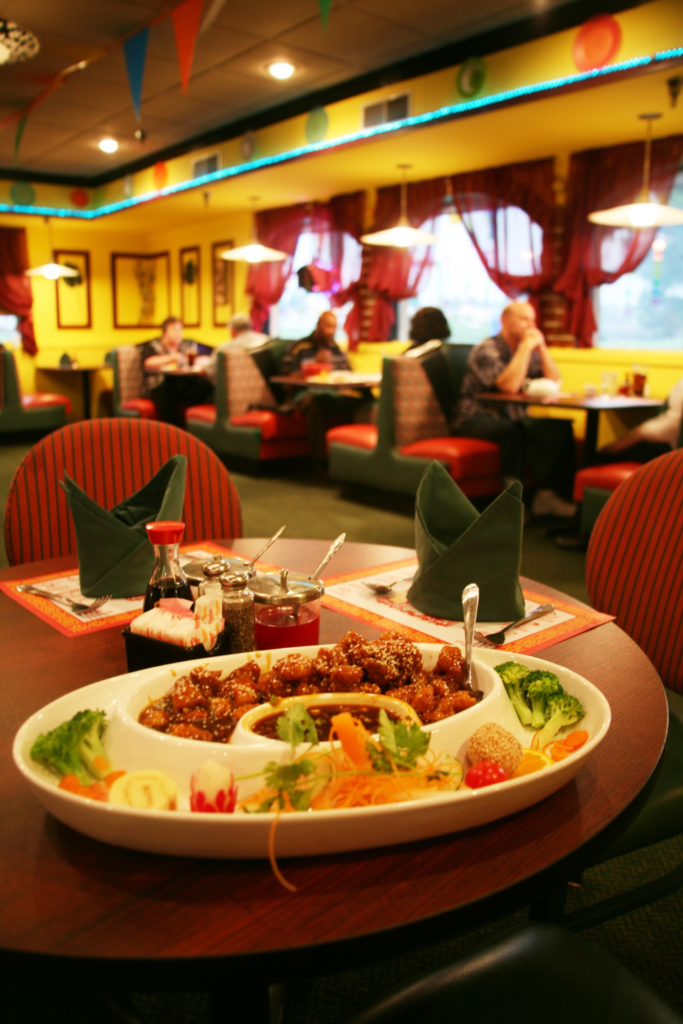 I like to see garnishes on a plate. Traditional sprigs of parsley or orange slices aren’t just festive but also useful: Peppery parsley cleanses the breath (and supposedly has aphrodisiac qualities), and the orange is loaded with vitamin C. Garnishes work best as minimalist touches — a small splash of contrasting color or an unexpected texture (croutons are considered garnishes, too) adding a little extra to a plate’s composition.

At New Taiwan Restaurant in Grandview, a garnish isn’t merely a decorative accessory. Sure, there was the conventional orange slice and a stem of fresh cilantro on my plate of General Tso’s chicken, but those were merely two notes in a lush, edible symphony.

Before I list all of the little creations adorning my chicken dish, I must say something about this restaurant’s plates. Even to call them plates is to do them an injustice. They are nearly as big as birdbaths and almost as heavy. On my first visit, the waitress nearly groaned bringing one dish to the table.

Any normal portion of food served on these gargantuan plates would seem stingy, so the kitchen crew fills in the empty spaces with florets of blanched broccoli, half-moon-shaped slices of cucumber, a cherry tomato meticulously placed on a tiny mound of shredded lettuce, a spoonful of fried rice noodles and an intricate two-piece phallic carrot sculpture dripping with skinny carrot threads. Oh, and two pastries — a sesame ball and a disc of dried-out cream cake.

There’s a reason for the desserts on the dinner plate, as Bob, Truman and I discovered on the early evening we dined at New Taiwan. Truman asked our server to explain the difference between Taiwanese food and, say, Cantonese or Mandarin. The lovely young woman looked at us thoughtfully and said, “The Taiwanese like desserts.”

That explained everything! Later, I learned that while the island’s culinary tradition is strongly influenced by Chinese cooking, the regional bounty of seafood, pork, papayas, melons, radishes, chile peppers and cilantro also plays a major role. And desserts, including grass jelly and frozen taro paste, are popular.

I don’t think grass jelly is on the New Taiwan menu, nor are Taiwan favorites such as oyster omelets or steamed pork patties. I wasn’t surprised by what was on the menu: the best dishes from the vast Chinese-American repertoire, including chow mein, lo mein and sweet-and-sour chicken. What surprised me was that the food here, in this former Perkins, is really very good. In fact, whether they’re fried or steamed, these plump, meaty and gingery pork dumplings might be the best I’ve had in the city.

Alas, the barbecued spare ribs weren’t so great — not nearly meaty enough and slathered with an impossibly sticky concoction that must have been made with spicy barbecue sauce and a house “sweet and sour” syrup that tastes like melted cherry Jolly Ranchers. The king crab rangoon, on the other hand, actually had little bits of crab — or something in the seafood family — blended in with the cream cheese.

I’d ordered the General Tso’s chicken because a caller on The Walt Bodine Show insisted it was the best he’d ever tasted. I don’t know what legendary General Tso Tsungtang (there really was one, a warrior during the Qing Dynasty who, by all accounts, was no chicken) would say about his namesake dish, but the pieces of crunchy fried chicken were drenched in a satiny ginger, garlic and chili sauce so tasty that I dunked my sesame ball right into it.

Bob ordered that old standby, sweet-and-sour chicken, with its light puffs of fried bird and that teeth-jarringly sugary sauce. He liked it. Truman chose the pan-fried noodles topped with sautéed shrimp, chicken and beef. He said the noodles tasted homemade.

Servers will happily nod and agree that everything is made in the restaurant’s kitchen, right down to the plastic flowers hanging from the windows. New Taiwan’s décor is classic Chinese-American: hanging lanterns with tassels, carnival flags, paper parasols and, strangely enough, an array of dollar-store-style plastic plates and bowls nailed to the mustard yellow walls. And a couple of wagon wheels.

We had already eaten the petite desserts on our plates, so we ended that meal with cellophane-wrapped fortune cookies. Mine read, “You have a brilliant mind for business matters.” I appreciated the false flattery.

I returned a few nights later with Patrick and Gary, who found everything about New Taiwan to be campy, charming and bizarre. Patrick noticed that there wasn’t one bottle of liquor in the bar and that the menu was 13 pages long. “But the yellow walls coordinate with our waitress’s name tag,” he said.

They loved the dumplings and the crispy fried spring rolls. “And everything is so cheap,” Patrick said. True enough: The bowl of sizzling rice with chicken soup, which was more than enough for the three of us, was less than four bucks (even if the rice didn’t sizzle).

We all ordered our favorite Chinese meals that night: orange beef for me (it tasted like the General Tso’s chicken with orange peel), sesame chicken for Gary and moo shu triple — a combo of pork, beef and shrimp — for Patrick.

Though the incredibly sweet sauce covering that sesame chicken would have been a delicious dessert topping and the plum sauce that Patrick poured over his tissue-thin Chinese pancakes wasn’t so plummy, they nonetheless raved about the dishes. “If you eat in as many Chinese buffets as we do,” Patrick said, “this is like haute cuisine.”

And they were entranced by all the little garnishes. Patrick’s plate was decorated with cucumber moons, the sesame ball, the carrot sculpture, a cherry tomato, an orange slice and a fried puff of yeasty pastry dusted with cinnamon sugar. “A Taiwanese doughnut,” he said.

“Someone in the kitchen must have a lot of time on his hands,” he added. “It takes a lot of work to put all this together.”

That’s why I was so charmed by the place. If they put that much care and attention into carving a carrot stick, imagine their devotion to a plate of pineapple fried rice.