The new Peachtree Restaurant is glamorous enough for the Power & Light District, but the original buffet is more fun 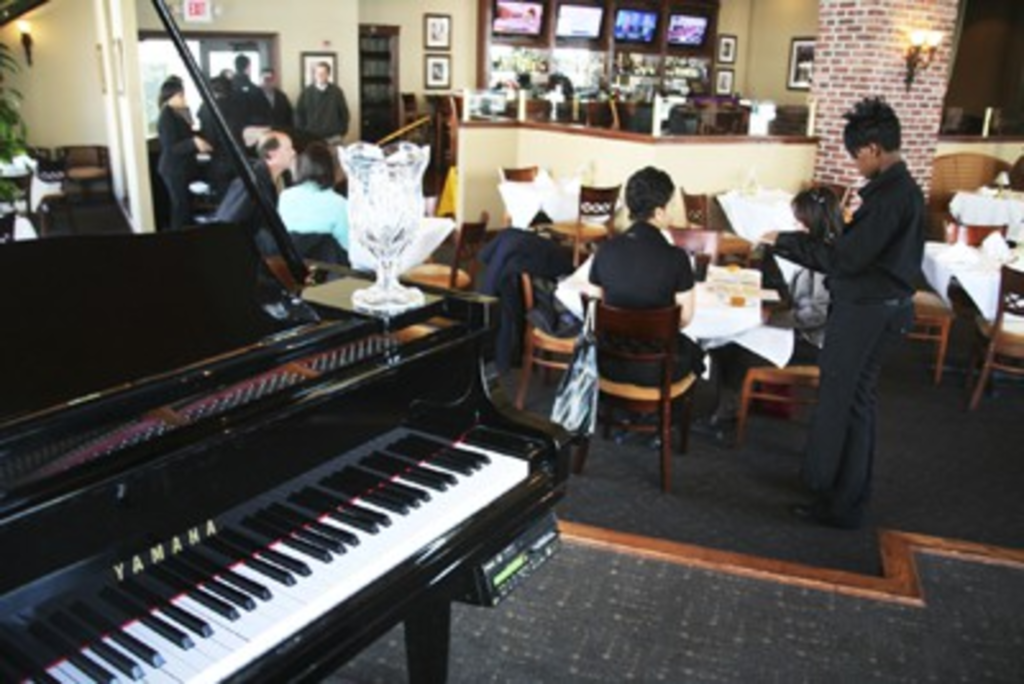 My friend Truman loves soul food — he’s from the South — and has eaten at the new Peachtree Restaurant in the Power & Light District several times. His major complaint about the place has nothing to do with the food.

“No one there can mix a decent martini,” he told me. “If you order one, you feel like you’re a sinner among a pack of good Christian teetotalers.”

I don’t know why he’d feel that way — this newest venue in the expanding Peachtree empire has a bar near the entrance. A large and glamorous bar, in fact, with televisions mounted above shelves stacked with neatly arranged bottles of the very best hooch. That bar says a lot about the evolution of the Willis family’s restaurants, which started in 1996 with a buffet — still one of the best meal deals in town — on Eastwood Trafficway. With the opening of their polished and elegant sit-down dining room in the 18th and Vine District five years later, they went upscale.

The Willis family didn’t serve alcohol (and didn’t plan to) at 18th and Vine. After all, they were used to the buffet’s clientele, which consisted primarily of churchgoing people who preferred lemonade to citron vodka martinis. They did serve mimosa cocktails made with nonalcoholic sparkling wine; not until customers started requesting something a little more spirited did the Willises add a small but tasteful wine list.

In the P&L District, where liquor is one of the primary attractions, it made sense for the newest Peachtree Restaurant to go with the flow. But the flow was a little unsteady at the beginning. When I first dined there last November, I took along Bob, Truman, Fred and Georgina. Fred and Georgina are of a generation that starts every meal, except breakfast, with a nice cool cocktail. When Georgina was served a martini in a highball glass — without so much as an olive, mind you — she was so scandalized that she got up, walked across the dining room and showed the stunned bartender how to mix a cocktail her way.

Truman says he had to do the same thing on a later visit. “When I have a plate of smothered pork chops, I simply have to have a little vodka to go with it,” he explains. “It’s a tradition that dates back to Ponce de León!”

The food was excellent at that meal, but I noticed issues that remain problems three months later. Either the dining room is seriously understaffed or the staff is undertrained — or both. As a former waiter and busboy, nothing irritates me more than seeing plates stack up on tables: appetizer plates not removed before the salad course, dinner plates shoved to the side before dessert. On my last visit, I noticed that it wasn’t just our table that hadn’t been bused but all the tables around us. I got so annoyed that I almost asked for an apron to do the job myself.

Servers are clearly working hard. The bus staff, on the other hand, gives a somewhat languid performance. And don’t get me started on managers who linger at the hostess station when there are plates on any table that obviously need to be picked up. I’ve worked with a lifetime of those divas, and they can kill a good restaurant.

So can a second-rate bartender, but the Peachtree seems to have solved that problem. Even though we were there on a Sunday afternoon, I saw plenty of martini glasses brimming with Cosmopolitans delivered to thirsty customers.

“It’s a beautiful restaurant,” Franklin said as he looked around the second-floor space, with its wall of windows, pretty appointments and a shiny grand piano. Accompanying us that day were Lauren and her 12-year-old daughter, Brittany, who had definite opinions on everything, starting with an appetizer of fried okra and green tomatoes. This isn’t a modestly priced appetizer, so it should at least have some visual appeal. But the four heavily breaded tomato slices and tiny bowl of crunchy little okra nuggets looked almost forlorn, even with a little dish of ranch dressing.

“The cornmeal coating is too thick, and the tomatoes are too soggy,” Brittany said with a sniff. I’m sorry to say that I was equally disappointed. I’ve had some tasty starters here, including the collard-green dip — a sassy spin on the standard spinach and cream-cheese concoction. The bitter greens give this dip some punch, but they were out of it that afternoon.

Yes, the appetizer plate was still on our table when the next course arrived — a basic salad with a wildly sweet honey-mustard dressing that Franklin loved. “It tastes like candy!” he said.

For dinner, he ordered the fried chicken. I’ve had it before and knew it would be good, even if it wasn’t up to Stroud’s standard — or maybe even the Peachtree Buffet standard. I’m more a fan of this restaurant’s salmon croquettes, with their seriously crunchy and delicious crust.

Brittany ordered the meatloaf — another signature dish here — baked with a tomato sauce. It was fine if not outstanding. Lauren’s baked catfish, slathered in lemon juice and pepper, was moist enough but bland. “You should have gotten the fried catfish,” I told her. “Eating healthy in a soul-food restaurant is practically sinful.”

My plate of fat, braised oxtail bones looked sinful enough. The meat — what little was actually there — was tender and lusciously caramelized. But I would have starved if it hadn’t been for the wonderful side dishes: macaroni and cheese, cornbread stuffing with gravy, and tarty simmered collard greens.

It was a pleasant, home-style Sunday supper in a comfortable, occasionally theatrical setting. (One of the women at the next table wore a hat designed like the one Aretha Franklin had on during the presidential inauguration.) But the little mistakes kept ratcheting up the irritation quotient. When our server brought coffee for Lauren and me, she announced that the kitchen was out of cream so she had brought milk instead. That was fine, but she had brought it in a coffee cup.

“This restaurant could afford these expensive triangle-shaped plates,” Lauren hissed across the table, “and they don’t have any creamers?”

I suspect the restaurant is spending money on a bakery-made chocolate layer cake, too. Though it was deliciously moist with fudgy frosting, it looked a lot like the moist, fudgy cake sold in a certain big-box warehouse store. Meanwhile, the menu claims that the peaches in the cobbler are “freshly picked.” Despite that likely bit of hyperbole, I still adore this cobbler, with its heavily spiced syrup under a thick lattice crust. And the house-made bread pudding was glorious.

“It’s a very nice restaurant,” Franklin said as we descended the elevator to the ground floor. “But I think the food is better — and cheaper — at the buffet, and it’s a lot more fun.”

Yes, you pay extra for the pricey Power & Light District setting, including the five bucks I shelled out for parking. And it’s a gorgeous dining room, no question about it. But I confess: I like the buffet better, too. To hell with martinis.