The New Face of Evil 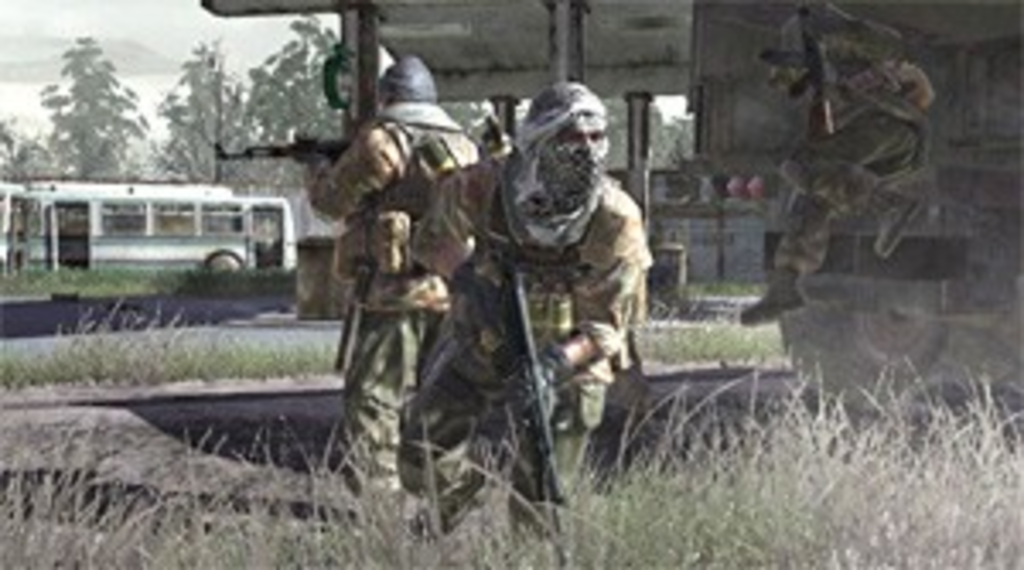 The unsettling tone is established early in Call of Duty 4, when the president of a Middle Eastern nation is publicly executed on the world stage, and you, the player, experience the deposed leader’s final minutes through his own eyes, witnessing — through the rear window of a car — a city’s last throes as it succumbs to a brutal coup. Bound and unable to escape, all you can do is watch the inevitable approach: beatings and taunts as you’re dragged into a plaza, and then seeing your executioner approach with a theatrical stride — fully conscious of his role in the historic moment and playing to a visible camera.

This isn’t your brother’s Call of Duty, a series that, until now, had been set amid the yellowed haze of World War II. COD4 is deployed squarely in the 21st century, its predecessors’ Normandy beaches traded for dusty alleys, and Nazi storm troopers replaced with Muslim extremists.

Call of Duty 4 is subtitled “Modern Warfare,” and countless features make it recognizably so, from fuzzy black-and-white feeds of air strikes to prisoners being beaten for information. For everyone who finds a new thrill in COD4’s contemporary turn, there will be others for whom it too authentically rips open fresh wounds.

As in past versions, COD4 makes you an ally in a worldwide campaign — in this case, either the British S.A.S. or the U.S. Marine Corps. Fighting the enemy takes you around the world, whether creeping through tall grass as a sniper or protecting a disabled tank in mid-ambush.

It all looks stunning, the scenes of the Middle East eerily reminiscent of nightly news clips. The audio too is not only convincing — it’s a huge element of the game: Those playing with surround sound can pinpoint the exact origin of any noise, making them fundamentally more dangerous in online multiplayer matches.

Still, not everything here is as modern as it could be, particularly for solo players. The first problem is the way an infinite number of enemies can spew forth from some physically impossible little nook — say, a woodshed. Picking off these jihadists from a distance is pointless, since they’ll continue to endlessly pour from these points like clowns from a Volkswagen until you actually charge the location. Also disappointing: In a game where one or two well-placed bullets can kill you, COD4’s lack of a true cover system is inexcusable. Your enemies regularly fire blindly from behind rubble and wrecked cars, so why can’t you?

Nevertheless, COD4’s multiplayer modes shine. The tactical game play — which emphasizes patience and careful aim over spraying and praying — is a welcome change. And repeated play unlocks character-enhancing abilities called “Perks.” “Bandolier,” for instance, lets you carry extra ammo, and the troublingly named “Martyrdom” automatically drops a live grenade when you die for a chance to take someone out with you. And since the game tells you how close you are to the next goodie, the just one more game factor runs high.

So, yes, COD4 is as addictive as ever. But with our siblings and cousins still fighting and falling on desert sand, it’s not unfair to wonder: Did it land just a little too soon?