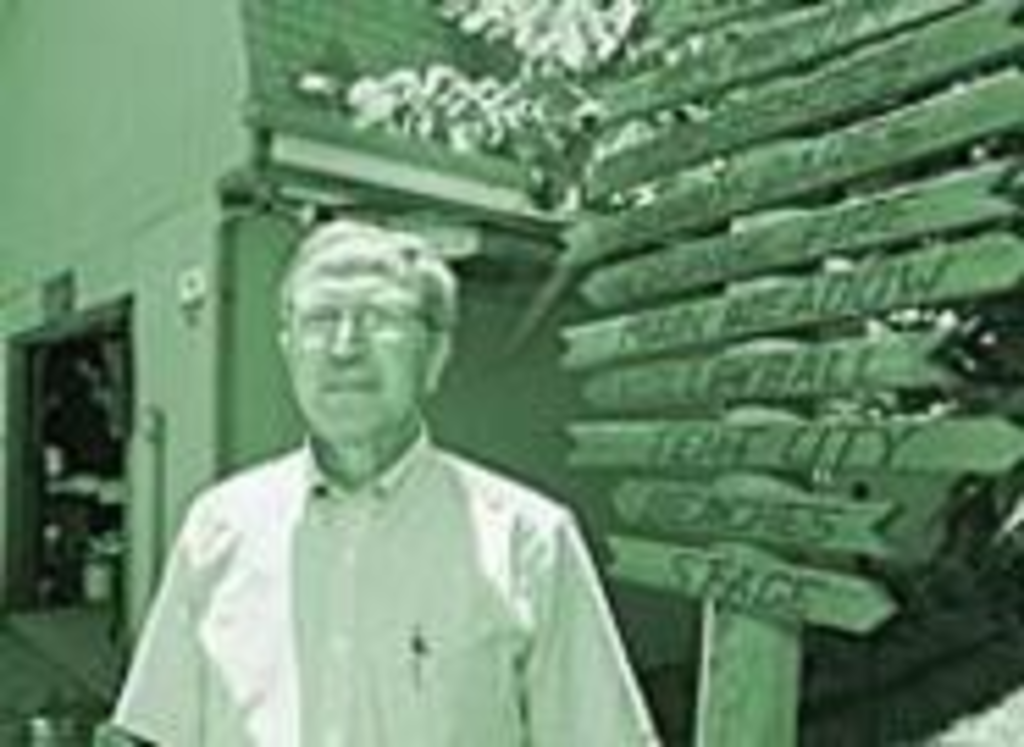 When Lake Edun exposed itself to the Topeka Chamber of Commerce, the suits said no thanks.
Merle Blair, the president and CEO of the Topeka Chamber of Commerce, says his organization offers its members many benefits — such as networking opportunities at business fairs and “after-hours” mixers as well as access to the Chamber’s 1,700-member mailing list.

Webb Garlinghouse of the Lake Edun Foundation Inc. wanted to take advantage of those exclusive perks, so two years ago his organization joined the Chamber, paying its $275 annual dues.

This summer, however, when Lake Edun proposed holding a mixer for other Chamber members on the grounds of its 80-acre resort southwest of Topeka, the Chamber shied away from the invitation: It didn’t want to hold its function at a nudist camp.

This July’s mixer at Lake Edun had been on the Chamber’s calendar since Garlinghouse joined. But this spring, Garlinghouse printed brochures advertising Lake Edun’s annual “Back to Edun” festival (a naturist event with live music, camping, and other activities), for insertion in the Chamber’s June “Community Happenings” mailing. When Blair saw the brochures, he deemed them inappropriate. “The content addresses personal lifestyle choices that are not compatible with our mission of promoting the business climate,” he wrote in a May 4 letter to Garlinghouse.

“We don’t want to give the impression that we approve of this sort of thing,” Blair tells PitchWeekly.

“Our mission is economic development,” Blair says. “We use the membership money to attract businesses to the town, and we advocate on behalf of business to the state legislature.” In June, the Chamber’s board of directors reinforced Blair’s decision regarding the mailers; moreover, the board decided not to allow Lake Edun to host the July mixer — or any mixers “in the future.” In a second letter to Garlinghouse, Blair emphasized that the Chamber had “sole discretion to approve all items of communications and events of the Chamber. Examples include, but are not restricted to: mailings, sponsorships, advertising, and functions.”

Lake Edun leases land owned by Garlinghouse, and the organization charges a membership fee of $250 for singles and $280 for couples (though a person doesn’t need to be a member to visit). Garlinghouse says Lake Edun views the dues as donations. The foundation also charges admission to its Back to Edun festivals — this year $55 for singles and $65 for couples. Kelly Shepardson, president of Lake Edun’s board of directors, says the resort has strict regulations to allay the stereotype that naturist facilities promote promiscuity. Most visitors “come out to enjoy nature,” she says. While proper lack of attire is the most obvious rule, the exception is for children under 18, for whom clothing is optional, because parents generally are the ones who decide to come to the resort and “some children may not feel comfortable with it.”

“When a person joins, they sign a paper that says there are rules, such as no overt sexual activity. If there is, you will be asked to leave. It is one of those things where we police ourselves. We can spot the gawkers because they are the ones asking, ‘When is the party going to start?’

“Another big guiding rule is ‘No jerks.'”

Shepardson became a nudist three years ago when a friend suggested she visit the then-unincorporated Lake Edun. Now, she says, she feels more accepting of her body and has an improved self-image.

Garlinghouse says that because Lake Edun is an “educational foundation,” the Chamber violated the organization’s First Amendment rights. “By preventing us from sending out brochures and canceling the mixer, the Chamber is not allowing us to fulfill our mission,” he argues. Shepardson agrees. “I think that it is very sad,” she says. “They are discriminating against us because they do not like what we do. We serve the public and feel we are being denied our rights.

“Blair would have the right to discriminate if it were inappropriate,” she adds, but she points out that none of Lake Edun’s promotional materials contain any written content or pictures that could be construed as offensive. The group’s informational brochures do contain nude pictures — such as a distant shot of a modern-day Adam and Eve walking hand-in-hand down a nature trail or a shadowy photo of a presumably nude man sailboarding, though it’s impossible to discern any intimate features.

But Marsha Sheahan, the Chamber’s vice president of public relations, pokes holes in the group’s First Amendment argument. “These are not really rights. When a business joins, we assume they join because they believe in our mission to improve the business climate. So when Lake Edun joined, we would believe they are accepting this mission statement. Along with that, there are opportunities and services available. The right (of membership) is that we are working to improve the business climate. What we didn’t anticipate was perhaps in the long term how Lake Edun might want to exercise their use of these opportunities.”

Neither Shepardson, Garlinghouse, Sheahan, nor Blair could point to Chamber policies concerning the specific content of mailers. The Chamber’s only guidelines mandate that fliers be professionally produced, delivered on time, and paid for. Nonprofit groups, such as Lake Edun, pay only $20 to participate in the monthly mailings; for-profit businesses use a quarterly mailing called “Chamber Connection,” which costs them $200. The Chamber never discussed such issues with Lake Edun when the naturist organization joined. Blair says membership criteria is simply that a group “be in business.”

But membership doesn’t have unlimited privileges. “Two hundred and seventy-five dollars doesn’t buy you the right to do anything you want,” Blair says. “We do all kinds of editing of Chamber mailings all through the year.” For example, he says, if a business were promoting an illegal activity, the Chamber wouldn’t include it in the mailings. “What Mr. Garlinghouse likes to do in his spare time is his business, but it is illegal in public.”

If an organization somehow implied that the Chamber sponsored its events, that too would be cut, he says. “Or if a nonprofit group is promoting a service that competes with a service offered by a for-profit business, the for-profit business (which pays more for mailings) would be given preference.”

“Membership doesn’t mean that they can have carte blanche,” he adds. “If you don’t like it, then you can decide to not be a member. Webb has a passion for his chosen lifestyle and I have a passion for the Greater Topeka Chamber of Commerce.”

In his letter to Garlinghouse, Blair offered Lake Edun a refund if the Chamber’s actions “diminish your desire to continue as a Chamber member.” Garlinghouse may have to take Blair up on his offer. Without access to the Chamber’s services, he says, “there is no point in being a member.”

And, Shepardson wonders, “If we are that inappropriate, why did they let us be members in the first place?”