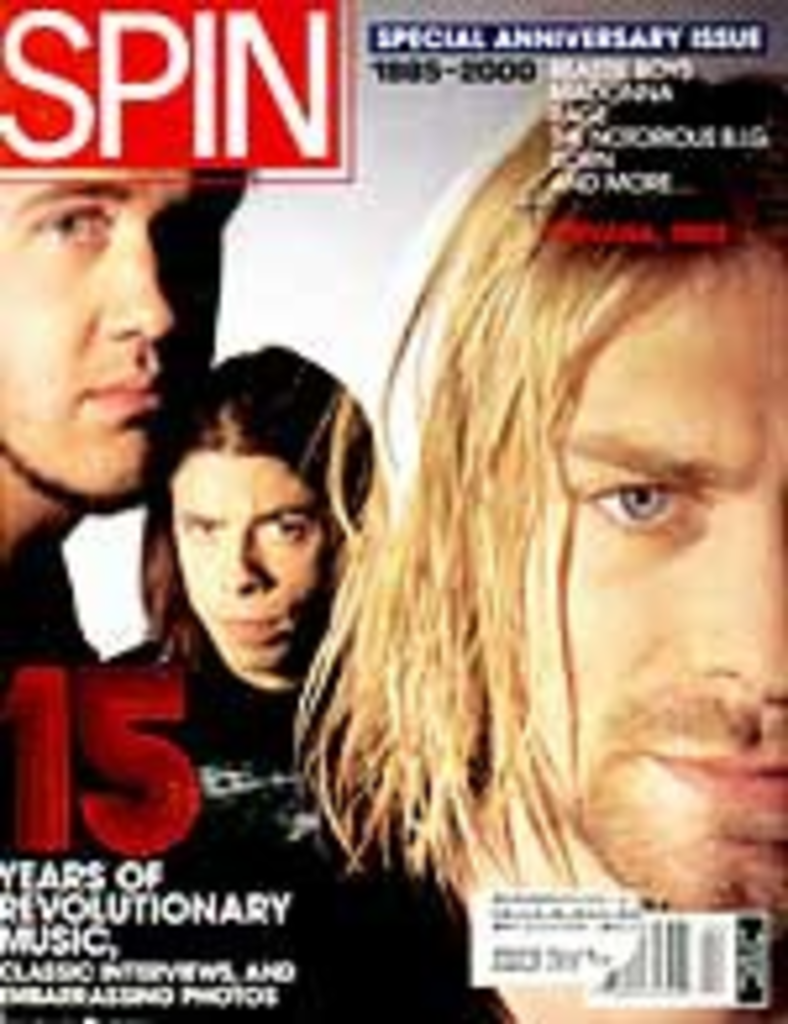 One of the most entertaining features of Spin magazine’s thoroughly enjoyable 15th anniversary issue is its wide array of bizarre, irreverent, and contradictory quotes. There’s the Beastie Boys, erstwhile social activists but former beer-spraying, crotch-grabbing party animals, recalling their ill-fated stint as the openers on Madonna’s Like A Virgin tour. There’s New Kid turned Sixth Sense-psycho Donnie Wahlberg, one of the first boy-band stars to defiantly say, “Just because we didn’t write the songs on our album doesn’t mean we don’t have any talent.” And there’s Madonna, two years before receiving a befuddling amount of acclaim for her techno album, Ray of Light, declaring that “techno is death.”

Given the cyclical nature of popular music, making any kind of time-sensitive statement is a certain way for artists to establish themselves as future objects of mockery. For every truth-telling hip-hop head who promised “rap is here to stay” back in the day, there’s 10 misguided souls who proclaimed electronica to be “the next big thing.” Now the members of this crew, and their cloudy-crystal-ball cohorts who predicted the extended popularity of ska-pop, revivalist swing, and post-Nirvana grunge, are desperately trying to unload their unhip records alongside lambada and macarena merchandise on eBay. All of this bodes well for those who are weathering the current onslaught of rap/rock bands with covered ears and pained expressions. As the rise and fall of Quiet Riot and Poison proved, the more outlandish the behavior, the more extreme the repercussions. Today’s decadent stadium-filling “pimps” are tomorrow’s pathetic Behind the Music whiners.

Spin somehow uncovered a 1988 photo of Kid Rock sporting a high-top fade that suggests that he swiped his hairdo, along with the first half of his name, from the Eraserhead half of Kid ‘n’ Play. Posing with Boogie Down Productions posse member D-Nice, Rock looks like one of Vanilla Ice’s backup dancers. Now reborn as an unrepentant hick-hopper, Rock makes proclamations, such as “I ain’t into being political, saving the whales, or telling you to go see a goddamned shrink. I’m into trailer parks, Pabst Blue Ribbon, and top-shelf mixed drinks.” Such a statement could have easily come from one of the Beastie Boys, circa 1986. But even if acting like an ass stops being a profitable business, don’t look for him to dress Joe C as a monk and hop on the Tibetan freedom train. In 15 years, Rock, along with the Insane Clown Posse, will still perform the same set, albeit with a few economically inspired changes. Instead of gallons of cheap soda, the Clowns will be forced to dispense only tap water, while Rock’s pyrotechnics will be replaced by burning newspapers housed in garbage cans on either side of the Holiday Inn stage.

Destined for a mildly more desirable fate is Limp Bizkit frontman Fred Durst, who’s always good for a quip such as “It’s good to be a rock star, dude.” Eventually, the perks will fade, his band’s sales totals will approach those achieved by the 1999 releases from Dokken and Great White, and the festival touring schedule will move from Ozzfest to Freaker’s Ball and Red, White, and Boom. But Durst, like Vince Neil before him, will always love the rock-star life. However, declining popularity is not the only peril that awaits music’s high-life-living bad boys. Durst would be wise to keep in mind the words of the late INXS frontman, Michael Hutchence, who in 1989 commented, “To realize your mortality is interesting, because you really don’t think it’s there. Especially as a rock star.”

It’s somewhat surprising that “rock star” remains a relevant term, given that rock supposedly gave up the ghost between 1986 and the present more times than Freddy, Jason, and Michael Myers combined. In this time span, Spin investigated six times whether or not rock, or punk, was dead. Given the lack of a physical entity to check for vital signs, the answers to such questions are largely subjective. For example, the success of the Warped Tour can be seen either as a loud proclamation of punk’s vitality or the signed death certificate of a movement, based on independent ideals, that has now surrendered to capitalist concerns. Still, even the most dire pessimist can’t ignore a still-beating pulse, and the fact that talented acts, though harder to find, still populate rock’s vast terrain makes it impossible to decisively declare the genre deceased.

Very few of the acts featured in the Spin retrospective managed to sustain their success over the entire time span covered. Some burned out tragically, and some gracefully bowed out of the spotlight but continued to release albums that appealed to critics and a cult following. Those who lasted either changed drastically, both in terms of creative output and image (Beastie Boys), combined a conformance to trendier music with an arrogant attitude that suggested they were above such allowances (Madonna), or, to paraphrase a line from Dazed and Confused, got older while the girls in the videos stayed the same age (Aerosmith).

For the most part, quality lasts, naked would-be emperors are revealed, and the rock gods sort out the rest. In the next 15 years, music fans will see more than their share of disposable pop pretenders, trend-hopping chameleons, and lecherous metal mooks. There will also be a new string of innovators and geniuses — artists who will ultimately define the decade to come and will leave the rock-is-dead doomsayers looking as foolish as Y2K survivalists. And despite the constantly changing cast of characters and the mass lapses in public taste at regular intervals, it’s safe to make one absolute statement: Rock, in some form, will roll on.