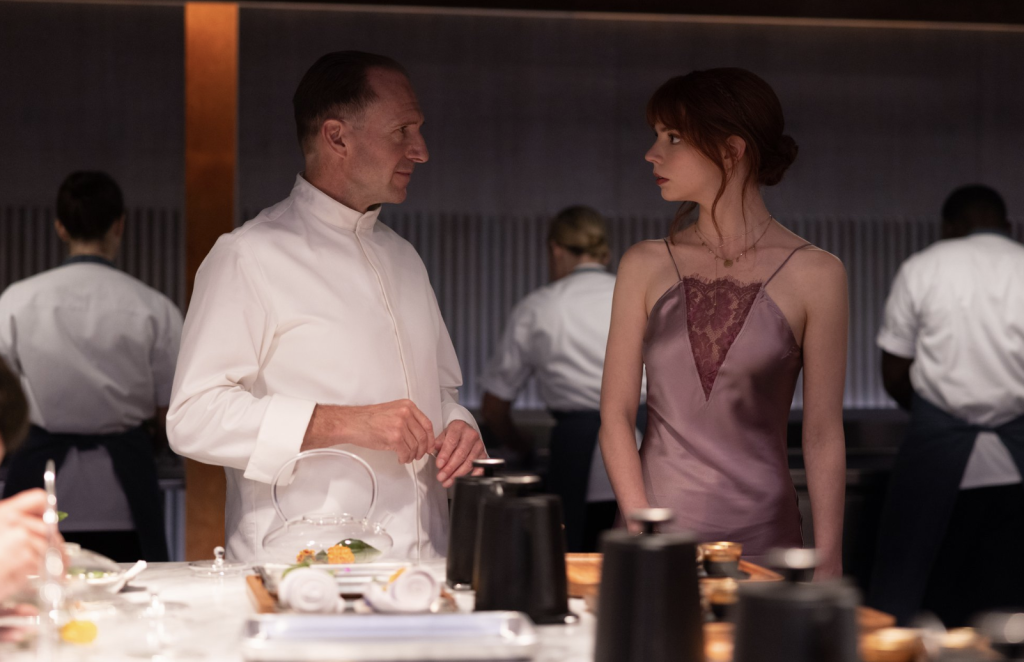 Ralph Fiennes and Anya Taylor-Joy in The Menu. Photo by Eric Zachanowich. // Courtesy of Searchlight Pictures

There’s something inherently cinematic about the world of food. Maybe it’s the intense pressure that helps to make a compelling story, or maybe it’s just how exquisite a plating sequence can be (no, really). Director Mark Mylod takes the world’s obsession with eating, talking about and looking at food and blends it to perfection in The Menu, A taughtly focused satirical meal that’s just as mean and delectable as you could hope for.

Hawthorne is the coolest and most exclusive restaurant around. Situated on Hawthorne Island, about 90 minutes from the mainland, it is the kind of destination that’s whispered about in the upper echelon of society. The staff live in a small one-room hovel, and procure and produce everything they cook right there on the property. This restaurant caters to only the elite of the elite—or at least has priced itself into a category where those are the people who can foot the bill.

Hawthorne is where power brokers (Rob Yang, Arturo Castro, Mark St. Cyr) can accrue status, and rich older couples (Judith Light, Reed Birney) eat out of habit. It’s the kind of spot where a food critic (Janet McTeer) and her editor (Paul Adelstein) can sneer at everything and everyone. It’s even a place where a washed-up actor (John Leguizamo) can cleanse his palate before embarking on the reality tv phase of his career. Any other night it would be a typical evening where the powerful and deluded can dine peacefully.

Unfortunately, tonight they’re the key ingredient in what head chef Slowik (Ralph Fiennes) hopes will be his masterpiece: a menu literally to die for.

Everyone at Hawthorne is meant to be there. Then there are Tyler (Nicholas Hoult) and Margot (Anya Taylor-Joy), a young couple on a date. Tyler soaks up every nuance and gesture the chef adds to each course introduction as if there’s a code only he can crack. Margot, however, is not only a clear fish out of water, but harbors a secret that could throw the whole evening out of balance.

Many great actors litter The Menu’s screen, but this is largely a four-hander, with each actor bringing something different to the chef’s table. Hoult is almost too good as the foodie who appreciates savory flavors more than the company of another human being. Fiennes and Taylor-Joy circle each other like predator and prey, trying to figure out what makes the other so intriguing. The real standout, however, is Hong Chau’s Elsa, Slowik’s right hand. Willing to do anything and everything to ensure Slowik’s evening goes off without a hitch, she treats her job of “guest relations” with obsessive conviction.

What makes The Menu so entertaining is its willingness to take shots at everyone and everything, with a biting tenacity happy to thumb its nose at convention that it pulls off with astonishing ease.

This kind of movie on the page could seem too droll or desperate for attention. Mylod takes Seth Reiss and Will Tracey’s script and makes it sing thanks to the efforts of line readings that turn acidic barbs into endlessly quotable nuggets. Good luck ever pronouncing “tortilla” again without thinking of this movie.

Pretention may be the name of the game from the outside, but The Menu’s chief desire is to entertain. Its wicked sense of humor is the secret weapon that seasons everything else around it. Those coming for bloodshed or vast overarching conspiracies may be left wanting, but they’ll still likely experience some delighted giggle fits.

The Menu’s opening titles, like the meal its characters are about to devour, invite you to “experience” the film, rather than just view it. That experience is a fun one, even if it’s a tad lighter than you might expect. There’s nothing wrong with indulging in the fast-food cinematic equivalent of fine dining. It may not move you, but it’ll leave you feeling satisfied.