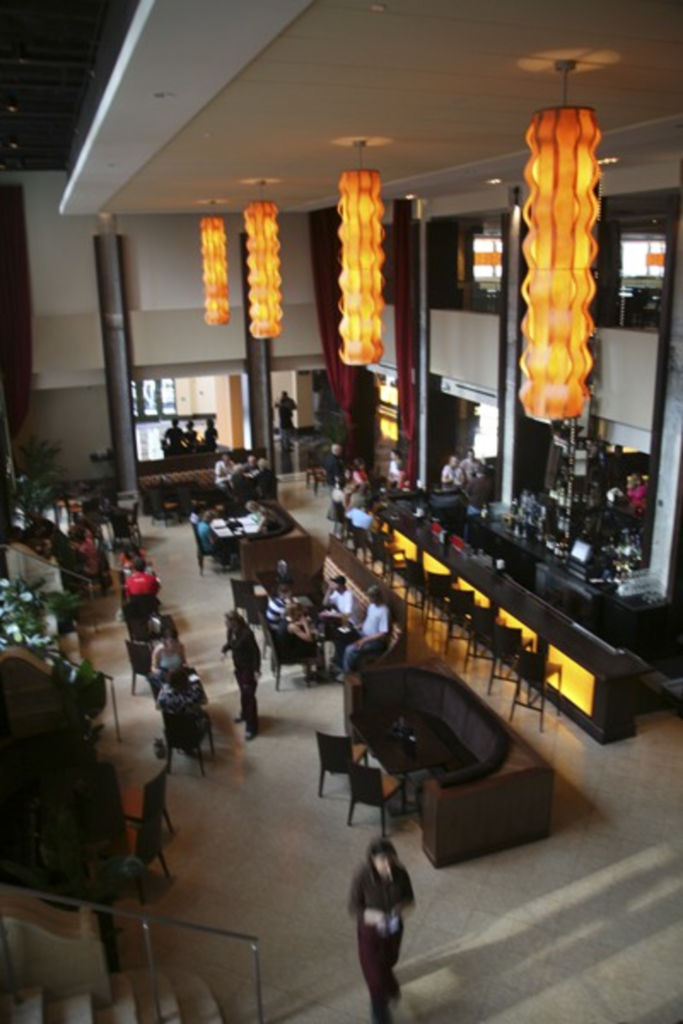 I ate lunch at the new Mainstreet Theatre with “Miss Cinerama.” Trust me, it wasn’t planned. For a meal at the sleek Marquee Bar & Grill in AMC’s new downtown movie palace, I invited my longtime friend Carol Jean, who apparently owns more crowns than Queen Elizabeth II. The year after Carol Jean was voted Miss Prairie Village of 1956, a big publicity blitz accompanied an exciting announcement about the movie house at 14th Street and Main. As we sat down to lunch, she pulled out a glossy photo of herself from 1957: a shapely little dish wearing a swimsuit and a sparkly “Miss Cinerama” banner.

Few remember Cinerama now, but it was a big deal in the late 1950s, when television was stealing so much business from movie studios that Hollywood introduced all kinds of gimmicks: 3-D, stereophonic sound, Todd-AO. Cinerama was a widescreen novelty: Three synchronized 35 mm projectors presented a dazzlingly large image onto a gigantic, curved movie screen. The former RKO Missouri Theater, built as a vaudeville house in 1921, was retrofitted for Cinerama. Its debut was such an event that patrons stood for blocks waiting to get a seat to see This Is Cinerama and Seven Wonders of the World.

“Did you get any prizes?” asked my friend Truman, who had joined us. “A couple of movie tickets,” Carol Jean said, “and I got to sit on the Cinerama float in the American Royal Parade.”

Cinerama had lost some of its novelty value by 1960, when theater owner Stan Durwood changed the name of the French Baroque-style theater to the Empire.

It was fitting that Truman and I had returned with a woman who had so many memories of the place, dating all the way back to her childhood. “My mother used to come here, before I was born, to see vaudeville!” she said.

And that made me wonder about the underground tunnel — much used by bootleggers during Prohibition — that supposedly runs between the basement of the theater and the President Hotel across the street. “It’s still down there but not safe to enter anymore,” the Marquee chef, Richard O’Brien, told me later. “We finally walled it up from this side.”

Even after the multimillion-dollar renovation (which involved moving the grand staircase from the south side of the L-shaped building to the west), O’Brien said there are all kinds of mysterious nooks and crannies in the building, including shafts once used to blow ice-cooled air up into the auditorium.

The theater had been abandoned for more than two decades, so it had to be gutted. None of the French Baroque glamour is evident anywhere. But the Marquee Room is striking, with red draperies hanging from the high ceilings down to the original terrazzo floors. The first-class bar is as swanky as anything you’ll find in the Power & Light District across the street.

And O’Brien performs culinary miracles in a shockingly tiny kitchen. Not everything is a box-office hit, but the place is so endearing, and most of the comfort-style dishes are so satisfying, that I find the experience enchanting.

This despite plenty of little annoyances. Not all of the servers are well-trained — we were lucky that we had pros waiting on us. There’s a distinct communication issue between the kitchen staff and the waitstaff. And I could live happily if I never again heard “Shake Your Booty” played at full volume at 11:30 a.m., especially while trying to concentrate on lunch. What the hell — I ordered breakfast, which is served all day at the Marquee and well into the wee hours on weekends; the “Late Nite Menu,” served until 5 a.m., is primarily breakfast fare, including pancakes and biscuits and gravy (which aren’t on the regular menu).

Apparently the Friday and Saturday post-midnight shift has been a gold mine for the Marquee (although, contrary to rumor, the venue does not serve alcohol after 3 a.m.). Naturally, I ordered the one breakfast dish that O’Brien plans to yank off the menu. The potato pancakes in Nana’s Latkes and Eggs were tasty enough, but not crispy or golden enough to pass muster with anyone who has tasted the real thing in a real deli. After an elderly Jewish woman reprimanded O’Brien on the inadequacy of the pancakes, he decided they had to go. On the other hand, Truman’s savory meatloaf dinner — a dish that’s typically dry and awful in most restaurants — was wonderful here, sided with garlic mashers and doused with amber-ale gravy. We also shared a plate of moist cornbread muffins and an excellent macaroni and cheese with a thick, silky sauce spiced up with a pinch of cayenne and bacon crumbles.

The fussy Carol Jean, always worried that her waist might expand like a Cinerama screen, ordered a small salad and a sandwich. But her sandwich was a full-feature affair: thick slices of nine-grain bread filled with three molten cheeses and spinach. “I’ll take half of it home,” Carol Jean said, “and eat it in front of my TV tonight.”

Patrons who would rather eat in front of the movie screen can order food at the Marquee and take it into the theater (the meatloaf might be a little messy) or have it sent into one of the smaller VIP theaters. Truman, though, was busy watching something else.

“Look at that waiter,” he said on our way out. “He looks like Keanu Reeves! If only all their servers looked liked movie stars.”

That would be an interesting concept. On my next visit, with my friend John, our ruddy server looked like comic Colin Quinn. He was funny, too, and very knowledgeable about the menu. He wasn’t afraid to steer us away from certain dishes, like the spaghetti and meatballs (it’s coming off the menu, too) or to recommend an open-face sandwich called the Walnut, made with roast turkey, melted brie and caramelized onions. I was happy I’d ordered it.

John likes the idea of sneaking real food into theaters, so he decided to try the Chicago Brew Dog as a test run. It’s a Nathan’s dog, slow-cooked in beer and topped with all the traditional accessories required for a real Windy City dog: sport peppers, relish, tomato, mustard, and a half-and-half pickle. “It’s really good,” John said after that first bite, “but if I was eating this during Terminator Salvation, the first time the seats vibrated, all this stuff would be in my lap.”

The Marquee Bar & Grill, like a great movie concept, is loaded with potential. Most of O’Brien’s ideas are highly entertaining, but he knows when something is a flop. For example: I’ve been inspired to try only one of the eight featured desserts, a sugary Chocolate Turtle Cake that was so airy and insubstantial that it vanished in two bites. It’s not made in-house, and O’Brien is thinking about hiring a real pastry chef. I give two thumbs up to that idea.

This restaurant in a movie theater may sound as gimmicky as Percepto — the electrified theater seats from 1959 — but for hungry diners wanting home-style food, it’s larger than life.