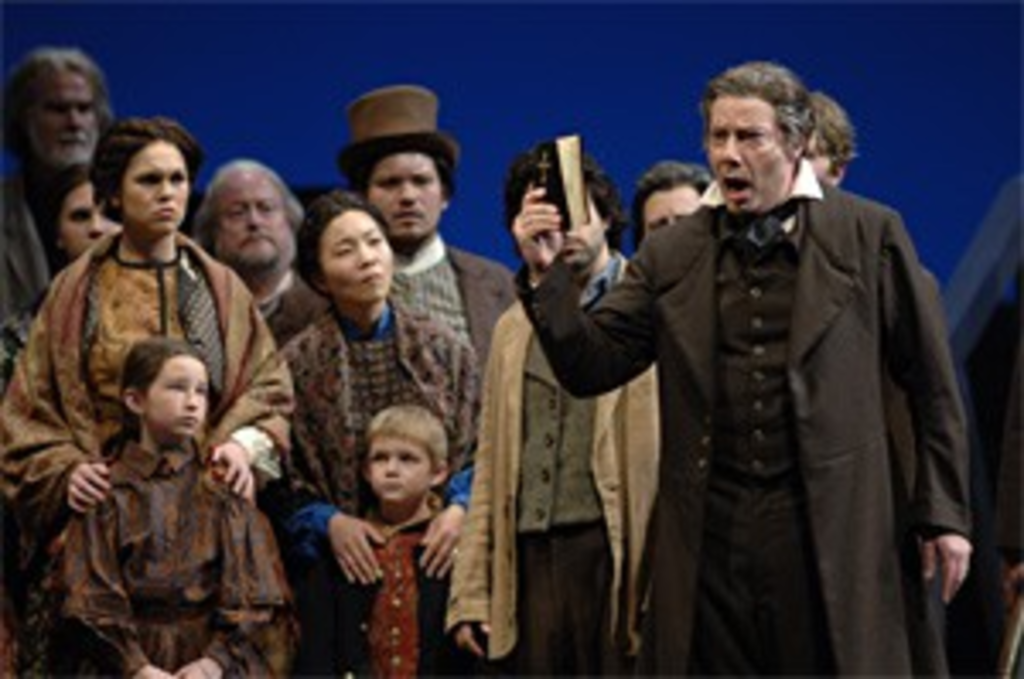 Here’s something I never thought I’d say. Last Saturday night, I spent two-thirds of an opera trying to peer around the head of the husband of the great-great-great granddaughter of John Brown.

That John Brown. The bearded tombstone, the Calvinist ass kicker, the abolitionist butcher of Pottawatomie with a rifle in his right hand and a Bible in his left. A man and a myth so knotted into this country’s history that today, 149 years after his hanging, he still confounds the moral mind. I mean, I hate terrorists, and I detest leaders who claim to speak for God, but damned if I haven’t twice pinned prints of John Steuart Curry’s apocalyptic Brown mural — the one still frightening Kansas statehouse field-trippers — above my desk for inspiration.

John Brown’s great-great-great granddaughter and her husband were nice folks, up from Texas for the world premiere production of Kirke Mechem’s moving, heroic John Brown opera. They were happy to chat with people sitting around them about what it’s like to have a legend in the blood. They also, thankfully, kept eyes peeled for better seats. After the second intermission, when a good sixth of the Lyric crowd had left to beat the traffic, the great man’s descendants scooted down the aisle — just in time for me to catch an unobstructed view of the stringing-up.

I can’t say John Brown is a great opera, both because it occasionally stiffs and because I don’t claim the expertise to do so. But I can say that six or seven times during its three-plus hours, it achieves greatness. When baritone Donnie Ray Albert shows up as Frederick Douglass, his voice bearing the stern, deep resonance of a great pipe organ, the libretto offers the greatest bits of Douglass’ greatest speeches, and the score rises into spirit­uals. And soon, the voices of the white folks around him swell with his in recitation of the Declaration of Independence. At moments like this, John Brown clutches music, history and the soul itself.

In three acts, composer and librettist Mechem runs us through the key moments of Brown’s late life, starting in Lawrence in 1855. At first, there’s some tough going, such as a pedantic sequence laying out Lawrence politics that sounds like Wikipedia in song: When Congress passed the Kansas Act, they passed the vote for war. Fortunately, as trouble sharpens between north and south, the words cut more powerfully. Many of Brown’s come from the real man’s speeches and letters and are stamped with a blunt, biblical style: Sharpen the swords! The glittering blade of Gideon/Shall swing again/To smite the foes of God! he rages upon learning that Lawrence has been sacked.

As Brown, baritone James Maddalena declaims like God giving dictation. This Brown is not a wild-eyed fanatic but a family man of holy rage, pushed to extremes to right one of history’s greatest wrongs.

But though it’s adept with hymns and death, John Brown struggles with the smaller moments. A long love song between Brown’s son (Patrick Miller) and daughter-in-law (Jennifer Aylmer) is well sung but never persuades us to care about such small-potato emotions. The orchestrations are sometimes cluttered, and they often drown out the cast. Unforgivably, on opening night, basic staging troubles wrecked at least one moment of power. Some backdrops were lowered off cue, and others swayed distractingly as scenes unfolded.

Mechem waffles somewhat on the extent of Brown’s violence. Asked about his involvement in the Pottawatomie murders, Brown is Clintonian in his evasiveness: I killed no one. But I’ll say this — I approved. Here, in the opera’s only explicit treatment of the massacre, that approved disguises Brown’s complicity. He approved not in the sense that he thought the massacre was justifiable; he approved the same way Bush approved invading Iraq.

Of course, making fine distinctions in an opera is like applying eye shadow with a forklift, so it’s too much to ask that John Brown present all sides of its difficult hero. What matters is that, over the second and third acts, Kansas bleeds, Ralph Waldo Emerson holds a dinner party and John Brown grows more generous with its highlights. Inspired choral passages greet each fresh death and, in a show-stopping walk-on, local soprano Vanessa Thomas turns the tragic story of a slave woman into a pained marvel. By the end, when the armed raid on Harper’s Ferry, Virginia, has consigned Brown to the gallows, Mechem’s score swells into both requiem and celebration, a majesty fit for its subject: the delayed, bloody birth of a truly free America.

Afterward, the crowd leapt to its feet and clapped so long and hard that hands grew sore. Or, most of it did. That impatient sixth had already left after the second intermission, and others darted out just before the curtain call. To my surprise, this last group included the great-great-great granddaughter and her husband, who clapped enthusiastically for a couple of seconds and then hustled out the door. Maybe they had to make a reception. Or maybe they wanted to avoid more family questions from people like me. Or maybe, when revolution’s in your blood, you have no cause to stand around applauding it.