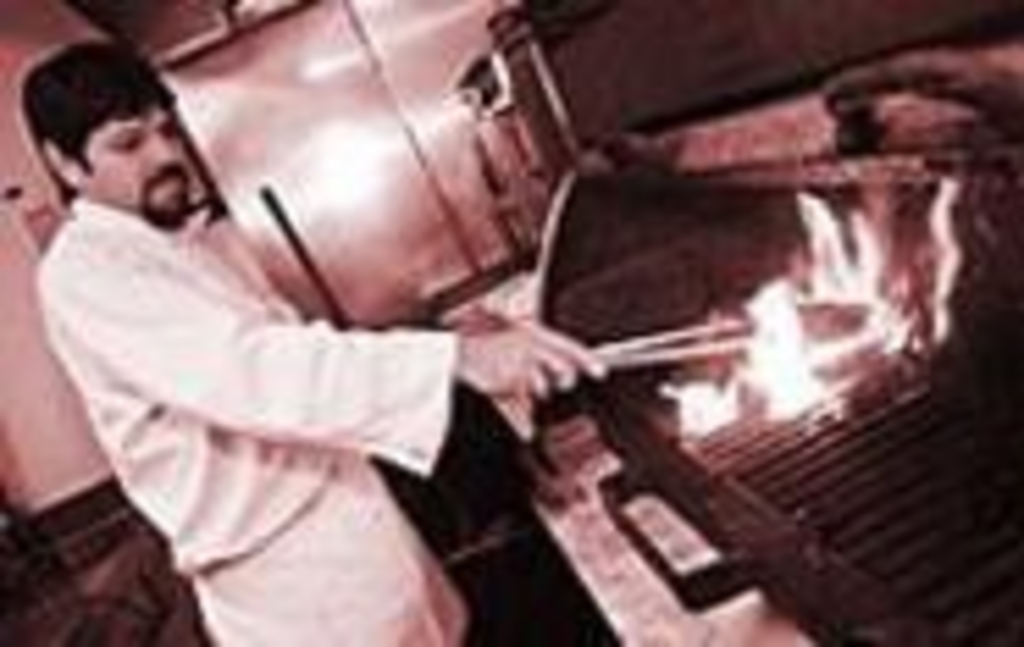 I recently stumbled upon an old Menu Guide of Kansas City — dating back to 1976 — that listed dozens of Kansas City’s most popular restaurants during the Ford administration. Back then, a juicy Kansas City strip never sold for more than $8, and that price always included a salad, a potato, and bread.

A lot of the guide’s steak joints vanished long ago: Chuck’s Steakhouse of Hawaii, The Overland Station, The Tudor Room (which offered King Arthur’s Surf & Turf), and Victoria Station. The Colony Steakhouse, already more than 20 years old by that point, was going strong at its original location at 35th and Broadway, on the first floor of the old Ambassador Hotel. Kansas Citians of a certain age remember that this incarnation of the Colony was where TV star Steve Allen discovered singer Marilyn Maye and where you could get a good steak dinner for about $6 in a dining room with white-cloaked tables and smooth waiters.

That was a lifetime and five locations ago. Since 1994, the Colony and its 24-year-old sister restaurant, The Lobster Pot (which opened at Union Station in 1976 but didn’t make it into that year’s menu guide) have been tucked into a low-slung building at 88th and State Line, the site of several unsuccessful restaurant concepts.

“My dad had a theory about restaurant locations,” says The Colony Steakhouse & Lobster Pot‘s owner, Bob Gaines, the son of the restaurant’s founder, Ralph, who died in 1980. “The first owner spends a fortune to open the place, the second owner improves it but doesn’t have the right concept, and the third owner comes in, changes everything, and starts making money.”

The Colony joined the Lobster Pot at Union Station — the steakhouse’s most financially successful location — in 1980, when the building was a rotting hulk but the operation attracted tons of convention and hotel business. After the Gaineses’ merged restaurants decamped from Union Station in 1989, they entered a five-year nomadic period (which included a stop at Westport’s Manor Square). The State Line building is probably the final destination for one of Kansas City’s oldest steakhouses, one that gets less respect than Rodney Dangerfield but deserves a helluva lot more.

The Colony may have been considered moderately fancy in the 1950s, but by today’s standards, it isn’t anywhere in the league of the Plaza III, Ruth’s Chris Steakhouse, or the wildly expensive Morton’s. It is what it is: a comfortable neighborhood steak joint that offers, on weekend nights, a pricey but generous seafood buffet. Compared with those at glamour steakhouses, the Colony’s steaks come off as bargains.

The place could use a little sprucing up, though. Right after stepping through the front door on a Saturday night, we noticed the bubbling, circular crustacean tank — the literal Lobster Pot. Half a dozen live lobsters were lolling listlessly in water so murky that my friend Bob dubbed it “the Lobster Swamp.” The gray display certainly didn’t make me want to eat one of these imprisoned creatures, although I might have been tempted to rescue one for a pet.

Bob thought the Colony’s dining room, with its exposed-brick walls and roomy leatherette booths, looked outdated, but I think the room is so out, it’s in. This is a steakhouse where the food, not the amenities, is the calling card. No linen tablecloths here — well, not on our table anyway.

“Why,” I asked Megan, our waitress, “do some tables have tablecloths and some don’t?”

Without missing a beat, she answered, “The big tables always get tablecloths, and so do the tables that might be a little scuffed on top. And if our regular customers want one, we check their reservation and make sure they get one.”

The scuffed tabletops aren’t too noticeable at night, thanks to lighting that makes the place look like some roadhouse in a Warner Bros. movie from the 1940s. And a couple of the waitresses are old enough to understand that cultural reference: Angie, Lena, and Juanita have been hauling out the Colony’s T-bones, Hawaiian Chicken, and mashed potatoes since the Ambassador Hotel days. They could do it in their sleep, and the younger servers are picking up the knack. The twenty-something Megan, perfectly at ease in a starched white shirt and black pants, was so efficiently attentive and quick-witted, she made her contemporaries at a suburban steakhouse a few miles south look like buffoons.

She — and her cohorts — had a lot more patience with the Saturday-night crowd than I would have had. The Colony is pretty tame on the weeknights, but on Fridays and Saturdays the place rocks, thanks to the allure of that seafood buffet. Some of the bigger booths and tables were loaded with complete family sets: Grandma, Grandpa, Mom, Dad, and all the kids. The Colony is a little pricey to be considered a “family” steakhouse, but I guess if you deduct the cost of a babysitter, you can rationalize a couple of $5.95 dinners from the kiddie menu (burgers and fries or popcorn shrimp).

Mercifully, all of the tykes were well-behaved. So were the adults. A quartet of double-dating hipsters in an adjacent booth had downed a few cocktails before ordering dinner, and their laughter had grown high-pitched when the topic turned, dangerously, to politics. But before things could get testy it was time for two members of the party to wander over to the Seafood Buffet & Feast, which they approached with a near-religious reverence. They loaded their plates and returned to the table in jovial, nonpartisan moods.

In many visits to the Colony over the years, I had never tried the seafood mecca myself, preferring a more cost-effective steak and baked potato. But after Bob chose an 8-ounce filet, I wavered between a Kansas City strip and one of the restaurant’s always-tender 14-ounce slabs of prime beef (the Colony Cut). Then I saw the lady with the bouffant walking past our table with a mountain of crab legs. I wanted them too.

At $35, the buffet is a steep ticket for diners with petite appetites or tight wallets. But, throwing caution to the wind, I forged ahead, devouring one plate after another: cold shrimp in their pink shells; marinated artichoke hearts; a sushi roll made with crab; little spiced crawfish; chilled asparagus; and cold salmon with a delicate mustard sauce.

For sheer seafood variety, this spread outdid even the casino buffets. There were wonderful shrimp cooked in garlic and wine, a rich and creamy clam chowder (which could have been hotter), lightly breaded fried shrimp and scallops, and a decadently rich fettuccine cooked with cream, cheese, scallops, broccoli, and shrimp. The Shrimp Creole had more peppers and onion than shrimp, and the crab legs were a shade rubbery, but I managed to polish off a good portion of them. And the smoked baby back ribs (riblets, really) in sweet-and-tangy barbecue sauce were luscious.

Boldly defying the “no sharing” rule, I tried to pass a riblet to Bob, but he was too absorbed in his fork-tender filet to assist in the crime.

After stuffing myself with an ocean of seafood, I found the Dessert Galley at the far end of the buffet to be an anticlimax. The two vats of ice cream were rapidly melting into creamy goo, the chocolate mousse was looking tired, and the square slab of caramel flan appeared to have been made of vinyl. But the little iced brownies and the pecan pie (both made off-premises) were sugary, and the freshly baked apple brown betty — fresh, tart apples under a crumble of spices and pastry — was extraordinary.

Satisfied that I’d gotten my money’s worth, I waddled out of the place like a lobster.