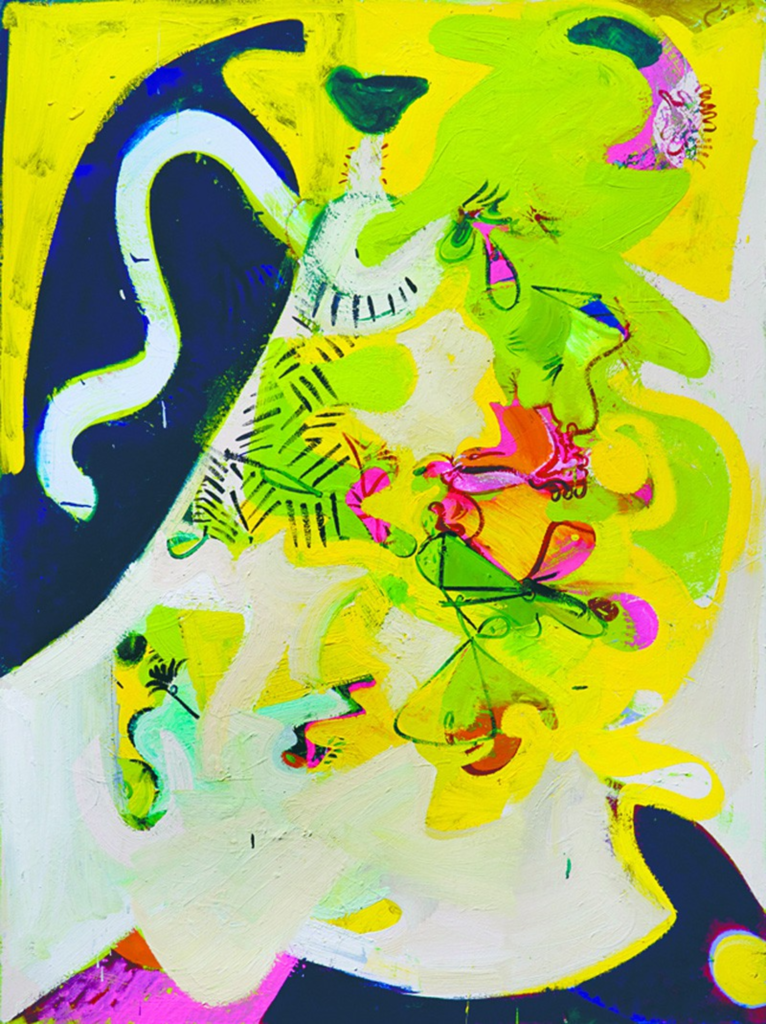 In 2001, a one-and-done local art journal called Speck ran a long interview with painter and Kansas City Art Institute professor Lester Goldman, in which the older artist said titling his paintings was “the most fun” part of making them. Eight years later, the interviewer, Eric Sall, is an established artist working in New York City, and Goldman — arguably at peak popularity — is dead. Increased attention is being paid to pieces that Goldman never got around to naming.

Last year, 125 of Goldman’s works sold at two retrospectives. Besides offering other insights, those shows highlighted just how much of his art went undisplayed in his lifetime. And now the effort to inventory and catalog Goldman’s output has yielded more unseen pieces. Six small sculptures make their public debut at the Kansas City, Missouri, Central Library. They form the twisted spine of Flights of Fancy Fulfilled, a modest but potent survey of Goldman’s abstractions (including eight paintings) between 1982 and 1996.

Goldman died of cancer four years ago this month, at age 63, just shy of his 40th anniversary at KCAI and not quite two decades into his life as an exhibiting artist. By the time his work started showing up in galleries, he had abandoned the figurative work of his early career (though he insisted that all his work contained figures) and taken up the torch of French abstract painter Jean Hélion.

In an October 2 panel discussion at the library, Sean Kelley, who curated Flights, prompted artist Glenn Goldberg, art historian Elizabeth Kirsch and about 130 people in the audience to ask questions and to share their own stories about Goldman. Warren Rosser, chairman of KCAI’s painting department, told the room that Goldman had “created a great adventure for himself.” Kirsch talked about Goldman’s “organic abstraction” and the command of the grotesque and the carnivalesque in his biomorphic art. Goldberg called his late colleague “an artist’s artist” and, like Kirsch, cited Goldman for bravery.

But the bravest person that night was the white-haired woman near the front of the room who accepted the microphone and said, “I understand he was a wonderful person and teacher. I came here for help understanding his work. I don’t always get it.”

Goldberg stepped in: “It goes back to bravery and accepting one’s own complexity…. Things that can be named versus things known by their shape.”

But most of the pieces in Flights can’t be known by their names — they’re untitled. Recognizing shapes isn’t easy, either, though the exhibit suggests the distinction between recognition and knowing. A 1990 oil painting vibrates with tantalizing hints of a musician’s room in some Picasso hotel: a table, a chair, an oboe, a drum and a mandolin, none discernible in traces so much as visible in the same certain instant, all at once.

Flash back to 2001 and Sall’s question to Goldman: “How do you come up with titles for your paintings?”

“That’s the most fun,” Goldman said. “All the work in the painting is to get the painting to feel like it was done all at once and to make the form simple and intricate at the same time. And to get the drawing to just kind of slither around. Like being able to move through the painting somehow. … I’ll have it untitled if I can’t easily understand what the title is. Because it usually comes to me without any problem.”

Though these sculptures are untitled, each is labeled to explain. “Seated figure,” one says. “Kneeling man,” another advises. And there’s plenty that slithers. These terra-cotta and ceramic pieces, most about the size of an overinflated basketball and all sharing the palette of mortal illness, seem to have crawled off the canvases above them. Loose, distended body parts turn in on one another in states of jumbled repose, huddled against elements that have already compromised their pores, rusted them out. One seated figure is all driftwoodlike limbs, one arm tucked behind in a pose of confinement and resignation. The glazed terra-cotta hand radiates palsy and decay, with a tunnel opening where the wrist should hold it in place and a flattened thumb trembling over bulbous fingers with blackened nails.

Compared with the raw, weeping sculptures, the paintings are lush and nurturing. The royal-blue-rimmed circle at the lower center of “Foot on Stilts With Two Ideas” (1986) looks like a peephole into a calmer mind’s eye — or the green-white iris of the painting (or the artist) staring back at you. The terminal yellows and greens recede into a fragrant tomato red, a color that recurs elsewhere in the room in careful tactile gestures and bracing washes.

In the most luminous of these oils, “The Tail of the ‘I’,” a deep and alluring midnight blue envelops the forms that dominate the canvas. The painting could be an overhead view of an island, one in a faraway tropic where bubblegum pink and preschool green harmonize. At the upper-left, a van Gogh yellow amasses and travels to the edge of the canvas; finding the border, it moves down the left side before giving up in a simple point.

The six sculptures are reason enough to see Flights. But if they are the disease, the paintings are the cure — or the afterlife.