If 800 acres of woods fall in the Northland, will anyone make a sound? 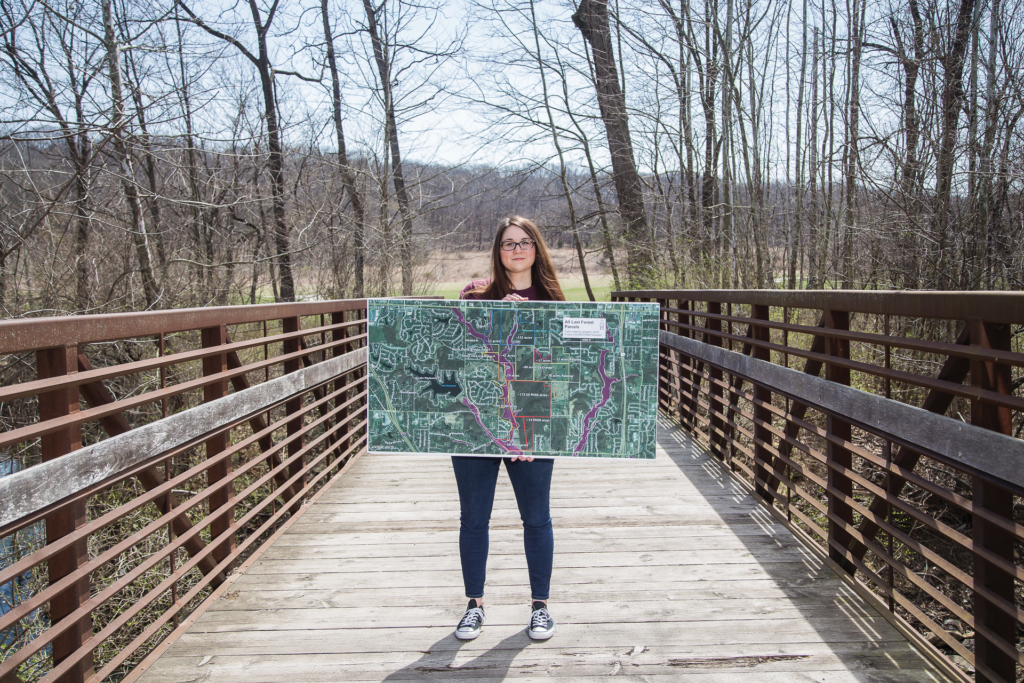 The signs began popping recently up on trees at the edge of the big woods near the Line Creek trailhead at Northwest Platte Brooke Drive. Little red and white signs, all along the edge of the clearing where the forest begins. “No hunting, weapons, trespassing,” they say.

But to Julie Stutterheim and others in the Northland, the signs mean something else: the beginning of the end.

On a chilly, brown-gray March afternoon, Stutterheim walks north from her home on the Line Creek Trail. She moved here about eight months ago because she liked the school district for her children.

“I honestly am a city person,” Stutterheim says. “If I had my druthers, I’d rather be within walking distance of a Starbucks and I’d be a very happy person.”

But she quickly saw the impact the woods were having on her two daughters: how they were playing more outside, searching for stick swords and little fish in the creek with other families creek-walking along the trail. Stutterheim, too, became enchanted with the stream and the woods.

“It only gets more beautiful as you go on,” she says, as the trail twists upward through limestone hills overlooking the creek. “There’s this amazing point where the trail curves around and you look down on this valley of trees. We don’t have a lot of places like this.”

For decades, nature lovers have passed afternoons wandering in the deep woods off the trail. It’s enveloped in forested land in all directions — 800 acres of hills and trees — offering a peace not often found in the suburbs. At a quiet midpoint, it’s almost impossible to imagine that, just a couple miles to the west, airport traffic roars by on Interstate 29.

“It’s just something about being able to walk on any trail and not see signs of humans,” Stutterheim says. “It allows you — at least for a brief while — to kind of disconnect and decompress and find a little solitude and not be imposed upon by something man-made.”

Stutterheim’s fear — and that of 7,500 others who have signed a petition to save these woods — is that the worst lies ahead for these beautiful woods. Those signs? They were put up by the Park Hill School District, which plans to build a new elementary school here — and, later, perhaps a new high school.

When Stutterheim first learned about the school district’s plans for the woods, she did what comes naturally to someone who’d recently quit a job in marketing for a nonprofit. She named the 800 acres The Last Forest and set up a website and Change.org petition to save it.

Once the schools are there, Stutterheim and others wonder, can development on private property to the north be far behind? There’s already a road right-of-way, planned years ago, that cuts straight through the middle. If that four-lane parkway is built, the uninterrupted forest would be history, survived only by the strip of protected woods along the trail and stream. 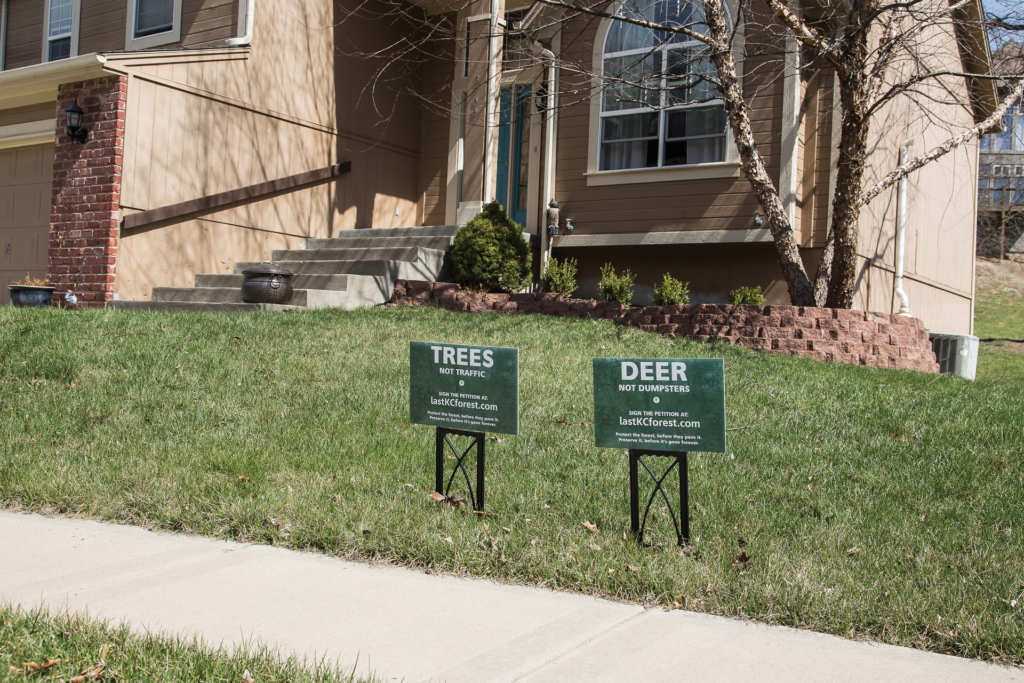 The Last Forest is unique in part because of its size. It’s unusual to have 800 acres of forest that is not already a park of some kind, says Wendy Sangster, community forester for the Missouri Department of Conservation. The 800 acres is in an area between Northwest Barry Road and Northwest 68th Street on the north and south, North Coventry Avenue to the east and Northwest Waukomis Drive/Green Hills Road to the south.

Sangster took a look at the area in December at Stutterheim and Nichol’s request.

“I had never walked that forest before, and I was surprised at the quality of it,” Sangster says. “Its value is that it is a high-quality forest. That’s hard to come by in the Kansas City region.”

It’s not an “old growth” forest – one where timber has never been cut. That’s almost impossible to find in the metro area, Sangster says. But it does have a good mix of old and new trees, uplands and lowlands and stream bottom lands. There are large trees at least 50 years old and some big oaks that are easily 100, she says. Also unusual is the fact that invasive plants have not moved in.

Nichols quotes from her report: “Because of its relatively healthy condition and its location, the area is an important piece of property for conservation.”

It doesn’t have any rare species, though — at least not that anyone knows of. As far as historical value, there’s the Interurban Railway route, plus a rumor no one has been able to run down that the area was a hunting grounds for former president Harry Truman — small beer in the eyes of the officials who make such decisions.

The northern portion of the forest is private property. The southern portion was, too, until the school district bought it. That means the best the petitioners can hope for is a land donation from one of those owners or a conservation easement that would keep the land undisturbed.

Neither of those outcomes appear likely, at least in the short term. Funds for park upkeep are tight in Platte County because of low reserves from the half-cent sales tax for parks and stormwater, says Commissioner Dagmar Wood. As a result, acquiring new land is not on the county’s radar. Kansas City also has no budget for a big land buy, says Councilman Dan Fowler. The northern property owners haven’t been approached yet. And the school district isn’t budging. 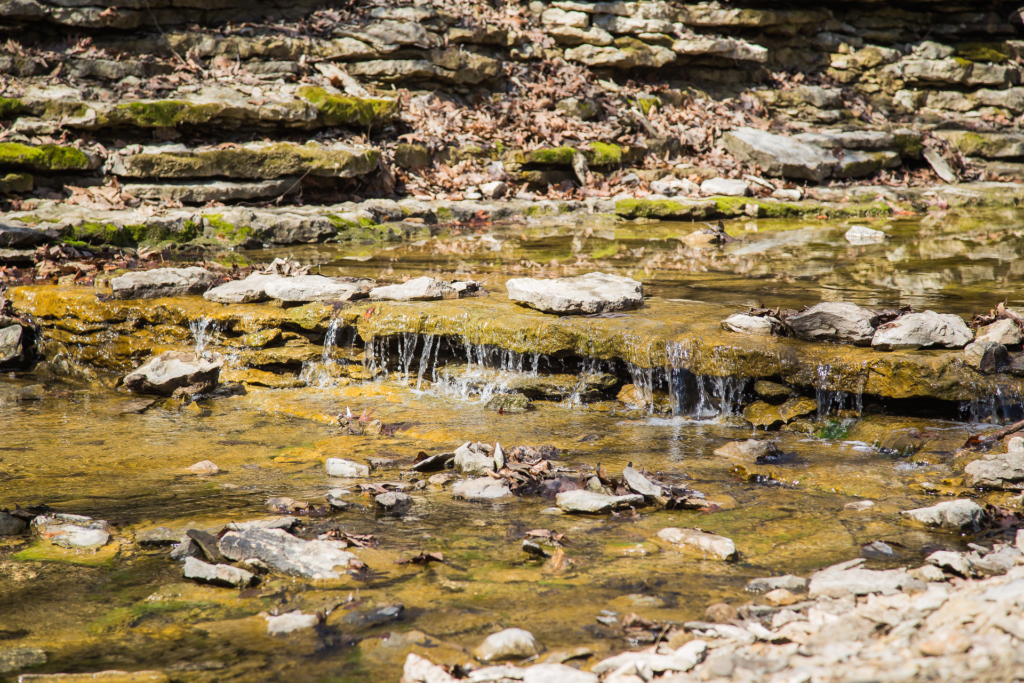 Platte County is one of the fastest growing areas in the metro, as northland school parents can attest. Park Hill School District has grown every single one of the last 34 years, says Paul Kelly, assistant superintendent. Six of the thirteen grade levels are at their highest enrollment ever.

In 2011, voters approved a bond issue that allows the district to go on a building expansion program. After that, the district immediately went to work identifying and rating land parcels where it could build.

The district and its consultants looked at 30 to 35 properties and rated them on 19 criteria, including access, site preparation expense and appropriateness of location, Kelly says. Despite its rugged terrain, the 272-acre forested piece scored relatively high. The building project will save money in other ways to mitigate the cost of site work, he says.

“The thought that there’s all this land out there to develop on is just a myth,” Kelly says.

For the district, the forest’s appeal is that it was a larger parcel that could be used for future expansion. Today, the general building plan for the area is as follows: the district breaks ground on the new Hopewell Elementary School in April, with the school opening next August. After that, it has plans to build a LEAD Innovation Studio – a type of high school learning center for 600 students that would open in 2020. A ways further down the road, if enrollment continues to increase, the school may dip farther south in the forest to build a full-sized high school on land that is not immediately in use. 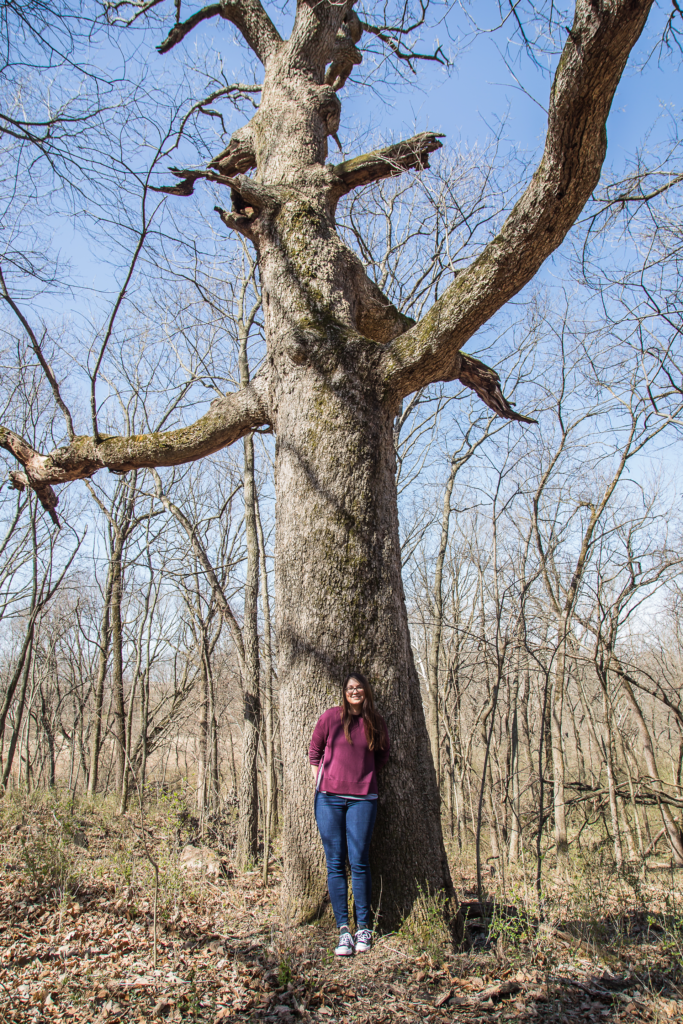 In any case, donating or a conservation easement is not being considered, Kelly says. Petitioners target that extra land, he says, “because nobody can believe right now you’ll ever need it. Our staff isn’t ready to tell our board of education that in 10 years there’ll be no purpose for that land and that we bought 100 acres we are going to just give away.”

Stutterheim actually supports the Park Hill elementary school. She’s got kids; she knows the district is growing quickly and needs to expand. It’s regarding the high school that she and others hope to convince Park Hill to pump the brakes. Stutterheim has urged district administrators to conserve that extra 100 acres instead, and to move the elementary and LEAD building closer together to minimize the footprint.

That would help save the southern part of the forest, she says. Eventually the conservationists would like to convince property owners to the north not to overdevelop as well. (So far, no development appears imminent on the north part of the forest.) And, of course, they don’t ever want to see a parkway cut through the middle of the forest.

On that front, at least, they’re starting to see some positive action. The Line Creek Parkway has been a part of the city’s master plan for decades, Fowler says. It was drawn in by planners to preserve right-of-way for a north-south stretch of road that would eventually connect NW Barry and NW Waukomis. Fowler says he’s sympathetic with the conservation proponents and had planned to file a resolution asking that the road be removed from the master plan. Removing the right-of-way seemed like an easy fix, Fowler says, because owners would then have to reacquire the land, raising their cost of development.

But he changed his mind after being advised that such a move would return ownership of the land to adjacent landowners, who would then be free to build to their hearts’ content. Keeping the right-of-way could prevent development, he says. Fowler hopes other council members and planners can be convinced that it would be smarter and cheaper to just make improvements on the existing nearby streets than start from scratch in the forest.

Though the school district remains unmoved, Stutterheim is holding out hope that the number of petitions signed and the comments that accompany them will eventually register.

She’s hardly the only one with personal attachment to these woods. Bill Nichols, a long-time paralegal, shares that he used to spend his spare time tromping around in the forest, exploring the dry lake bed and old Interurban Railway cuts there. He dreamed of putting in campsites and rehabilitating the dam that breached in 1977 and letting it fill back up to restore the 12-acre Drennon Lake that was once a for-fee local fishing spot. When a friend forwarded him Stutterheim’s petition, he quickly offered to help Stutterheim with her efforts.

“You can’t get back this last remaining tract of KC forest once you destroy it,” wrote Lisa Owens, who lives near Stutterheim. “There are so many birds, deer, beaver, fox, coyote, mink and other animals that call this creek home. Not to mention the wildflowers and butterflies. Build this stuff somewhere else.” 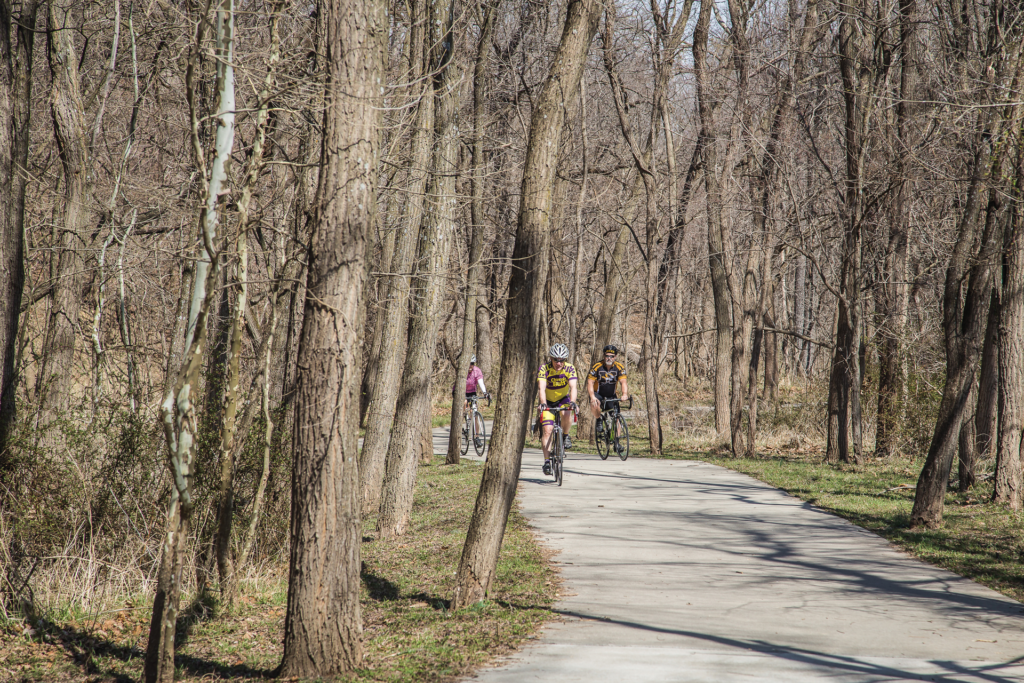 But it’s impossible to tell from the petition how many signatures come from those who live within the Park Hill School District, Kelly says. And he and other school staffers haven’t noticed a big outcry about the forest from the residents who’ve turned up at presentations on the new schools.

“It doesn’t seem to be resonating with the communities that we’re going to,” Kelly says.

Given the journey so far, Stutterheim is not sure how optimistic to be. But she plans to keep trying.

An unusual bird calls from somewhere off the side of the trail. What kind of bird?

“I don’t know. I wish I knew,” says Stutterheim. “I don’t know anything about this stuff. All I know is that the more I learn about how old this forest is and how much people care about it, the more I think that, if a non-nature-lover like me can fall in love with it, can we just take a beat and think a moment before we destroy it entirely?”