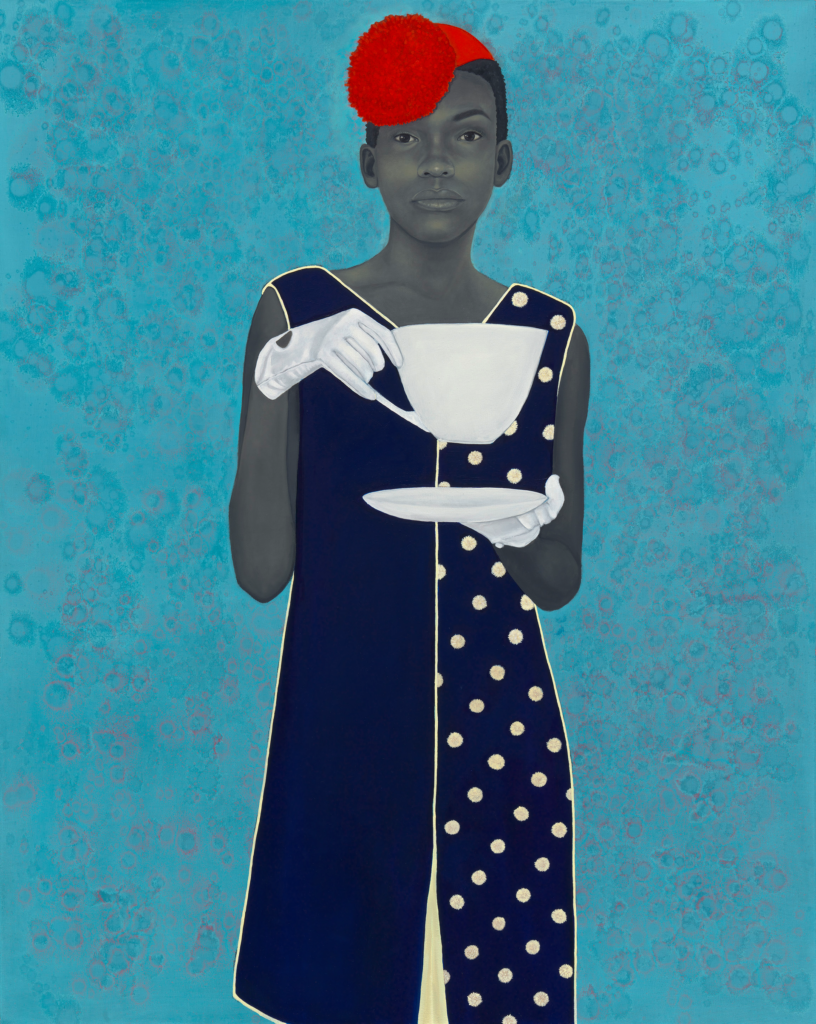 The Smithsonian National Portrait Gallery awarded Amy Sherald’s “Miss Everything (Unsuppressed Deliverance)” first place in the 2016 Outwin Boochever Portrait Competition. It is the image you see on this page, and I’ll talk about it more in a minute. But time is running out for you to see it in person at the Kemper Museum of Contemporary Art. If it’s not yet January 7 when you read this, go to the Kemper and come back. I’ll wait.

The Kemper is the only Midwest stop for the National Portrait Gallery’s exhibition of 43 selected Outwin Boochever winners, and, simply put, the show is a must. My notes from walking through the space remind me to mention complex social hierarchies and contemporary challenges to the American identity and how the art of portraiture addresses those matters here — how certain themes recur, destined to be fed to the insatiable hydra of American culture. At whatever depth these works speak to you, however, there’s an almost primal thrill to seeing a significant assemblage of recent figurative art.

The only portrait here that does not include a human face is “Janie,” by Clarity Haynes. The subject is painted from her chin to the bottom of her stomach, her ample volume spilling to the edges of the frame and beyond with a fullness that recalls the ancient Venus of Willendorf. Haynes emphasizes the weight of the breasts, draws our eyes over the contours of a body at rest. Her nudity renders her vulnerable, until we recall that, countless human generations ago, nakedness was a symbol of strength and fertility. The portrait restores some of that power by depicting this body — the shadows under the fat and between the puckers of the stretched skin — with painterly beauty. Haynes captures time itself in the dimension and muted colors of the painting: “Janie” shows us the softening, the stillness, the rounding of the body as it yields to the years. The 21st-century American woman might reject this sight at first, conditioned as she is to avoiding the appearance of hunger, especially for something that expands the shape or diminishes the presumed allure of a lithe body. (Let’s set aside for now the way a typical modern man might see Janie.) Haynes challenges us to reconcile our prejudices about size and what it indicates about socioeconomic status and self-awareness. Beauty standards have evolved along with humans; Haynes’ work is a capsule history of these changes, contained in the uncontainable force of one body.

Alison Bechdel, the illustrator, feminist author and namesake of the test so many popular movies fail, is a semi-recognizable face in the gallery. Riva Lehrer depicts the artist looking into a mirror, one arm thrust behind her sketching a portrait of her mother in blue ink in the dark spot of her own shadow. Bechdel’s own ink-and-paper version of her mother portrays a chilly, detached figure whose power over household and children inverts the control she lacks over her marriage. Lehrer’s piece adds an exterior, observational layer to Bechdel’s memoir, while introducing — the Bechdel portrait is the first you see — a possible thesis for the whole show. Portraiture is an art of self-reflection for the artist, regardless of who is on the canvas. Each is a map of flaws and victories, which the viewer may recognize in common.

Which leads me to Sherald’s “Miss Everything (Unsuppressed Deliverance)” — a figure ready to hold us indefinitely in her steady gaze. Her pose is culturally performative, a person indulging a historical fantasy that doesn’t quite fit into any single American era. Her look is vintage — bygone hat cocked to one side of her head, white gloves snapped tight, a dress you’d kill to find in a thrift store. She could be heading off to church or returning from it. The teacup in her hand is comically distended, as big as a whole kettle. The backdrop suggests wallpaper they don’t make anymore. She is not someone you know. Yet her expression is frank and altogether modern. If you find her appearance ironic, she’s not laughing with you. Miss Everything does not recognize her deviation from historical reality, the way she has been liberated from our history to live out her own alternate timeline, free to drink tea and look her finest, apart from anybody else’s expectations or assumptions about her status, her class.

Meanwhile, Sherald herself has earned a role in shaping the American narrative. She will paint the official portrait of former first lady Michelle Obama. Looking at “Miss Everything,” you can’t imagine any artist better suited to that task.

Rigoberto A. Gonzalez’s “La Guia (The Guide)” borrows its drama from Romanticist paintings of the mid-1800s but its concerns from yesterday’s papers. A theatrical moment unfolds around three figures: a man, a woman and la guia, a teenage girl. But the girl is charged with smuggling this family and others safely from Juarez, Mexico, to El Paso, Texas. “La Guia” demonstrates Gonzalez’s thorough understanding of composition, color and light, and it’s not hard to imagine him working in the 19th or 18th centuries. By emphasizing technique, Gonzalez renders his contemporary allegory in a timeless way: Each of the three characters expresses fear and doubt in ways recognizable across centuries of art. The figures are lit from the left, somewhere behind the viewer. But in the top-right corner, the last bit of a sunset can be seen behind the mountains around the Mexican city. It’s a small detail compared with the overall dimensions of the image, but it tells us something important about the moment: This is no heavenly or natural illumination but rather the searchlights of angry authority. However you feel about the political issues running under the current in “La Guia,” the painting’s anxiety washes over you.

By the exit, a salon-style composition of frames displays Naoko Wowsugi’s “Thank You for Teaching Me English.” Fourteen photographs of friends, each in the middle of pronouncing a word he or she has taught Wowsugi, make the language itself the portrait’s subject. Colorful backgrounds match the tone and intensity of each word. A man in a suit with wide blue eyes says, “Bureaucracy.” The “Smithereens” girl is caught midgrowl, her eyes narrowed to convey obliteration. Jaimie Warren (yes, KC’s Warren) bullies us from a floral post above our heads, lips stuck out in a taunt: “Wussy.”

It’s a lighthearted conclusion to an almost overwhelming exhibition, one that shows us loved ones, families, friends and even heroes not objectively but with the intimate subjectivity of portraiture. Taken together, the images at the Kemper mirror the ways in which we separate people are all pressing against the same American membrane, every unique actor affecting the whole. In the faces and figures are moments of strength, compassion, humor and resiliency of a kind we hope to see in ourselves. The Outwin selections confirm that, when we make ourselves susceptible to empathy, our vulnerability is the first step toward tolerance — and we are seen, even when no one is painting us. The membrane pushes back against our efforts to alter societal boundaries, but maybe, as another of Wowsugi’s teachers puts it, it’s all gonna be “iight.”

Through January 7 at the Kemper Museum of Contemporary Art, 4420 Warwick, kemperart.org