The KC Rep’s Peer Gynt is a magnificent spectacle 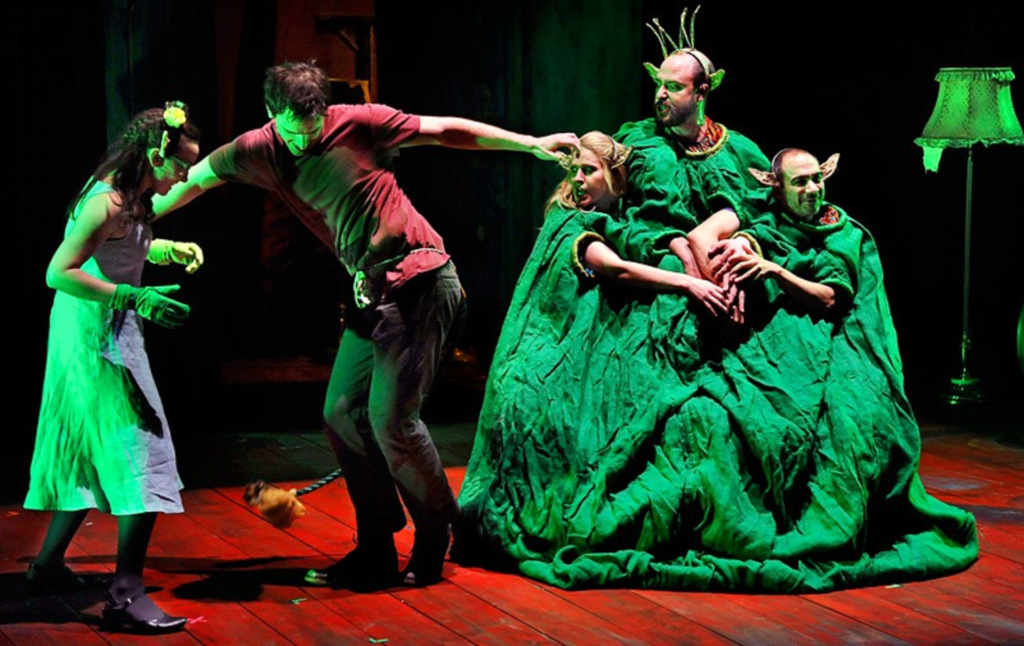 Ingmar Bergman owes it all to Henrik Ibsen. Especially The Seventh Seal, but really, everything. So does Federico Fellini (especially Satyricon), and so does Richard Foreman’s famous Ontological-Hysteric
Theater in New York City’s East Village.

The impressively whiskered Norwegian (he wouldn’t have looked out of place in Abraham Lincoln’s cabinet) fearlessly destroyed all that came before and, with equal fearlessness, created all-new modes of expression. His Peer Gynt is theater at its most
theatrical, storytelling at its most absurd — a stage experience that can’t be replicated on film, even by Bergman. And for those who are always seeking the fresh idea, the weird, the grotesque — a certain wintry Scandinavian darkness — this play is your ticket. (Prefer classic, timeless themes? Step right up.)

The Kansas City Repertory Theatre’s production of Peer Gynt makes strikingly clear why Ibsen is considered “the father of modern theater,” and perhaps the greatest playwright since Shakespeare. Variously a fairy tale, a pilgrim’s progress, a recurring nightmare, a prodigal’s return, an Everyman story, and
a raw autobiography of Ibsen himself, the play is streaked through with inventiveness and fantasy but also grounded in universal human questions. Its issues are as current and relevant as, say, a Judd Apatow movie (will the eternal man-child ever grow up, and at what cost?), and its structure and staging — 144 years after its writing — still feel avant-garde.

At the performance I attended, audience response was uncertain; the ranks thinned slightly before the second act. This is no crowd-pleasing Cabaret — no women in sailor middies, no high kicking. But Peer Gynt‘s rewards are great. The play worked best for me when I stopped trying to piece it all together and let the allegory and poetry wash over me. Once I let myself ride its slipstream of consciousness and enter its spirit of whimsy (that fairy-tale zone where good and bad lurk behind corners and a three-headed troll king can offer you the keys to the kingdom), the visual splendors and charm did the rest.

Grandiose and self-deceiving, a liar and a rogue, bumptious and greedy, Peer Gynt is a young man with no prospects and too much ambition. He abandons an adoring mother and a loving sweetheart to seek his fortune. What follows is the randomness of life, a
picaresque of dream-vignettes that follows his travels from buccaneer ship to sheik’s tent to the buttonmolder’s crossroad. Full of goblins and trolls, dunces and fools, screeching kaisers and red-heeled priests, this is life … on acid.

At the Rep, it’s played by an ensemble cast, with actors revolving in and out of roles. Danny Gavigun, Luis Moreno and Evan Zes, three dramatically different physical types, inhabit Gynt at various moments, although the role is primarily Gavigun’s. He’s the
Everyman, all annoying selfishness and contradictory impulses, but he makes us root for him all the same. Moreno and Zes are very appealing in an assortment of colorful secondary roles. Zes, especially, gives it his all with an unhinged physical performance. The radiant Birgit Huppuch shines as both mother and sweetheart while managing to insert some steel. With her commitment and energy, Kate Cullen Roberts proves that there are no small roles. She might look
like a Nordic maiden, but she makes a fabulous troll.

As good as the actors are, it’s the Rep’s usual perfect harmony of gifted backstage contributors that make this production — as much reverie as spectacle — so memorable. Darrel Maloney’s lighting design and Ryan Rumery’s sound and musical composition work beautifully against David Zinn’s wonky, rustic background. Christina Wright’s costumes are done well, with the troll king’s design bordering on comedic brilliance.

David Schweizer, the man who has spent the past three decades adapting and directing versions of Peer Gynt around the world, is obsessed, and it shows. Adapting a five-act, five-hour, 40-actor epic — Ibsen himself thought it could not be staged — to a manageable two-hour, five-person model must be one of theater’s more grueling surgeries, but Schweizer’s Peer Gynt emerges very much alive, with vibrant characters and an emotional arc that works. The staging ideas feel new. The emotional beats arrive as revelations, and the shifting cast emphasizes archetypes without dispensing with character. For believers in magic and the power of love, for those who feel like nobodies but long to be emperors of their own hearts, this Peer Gynt is a vision to behold.