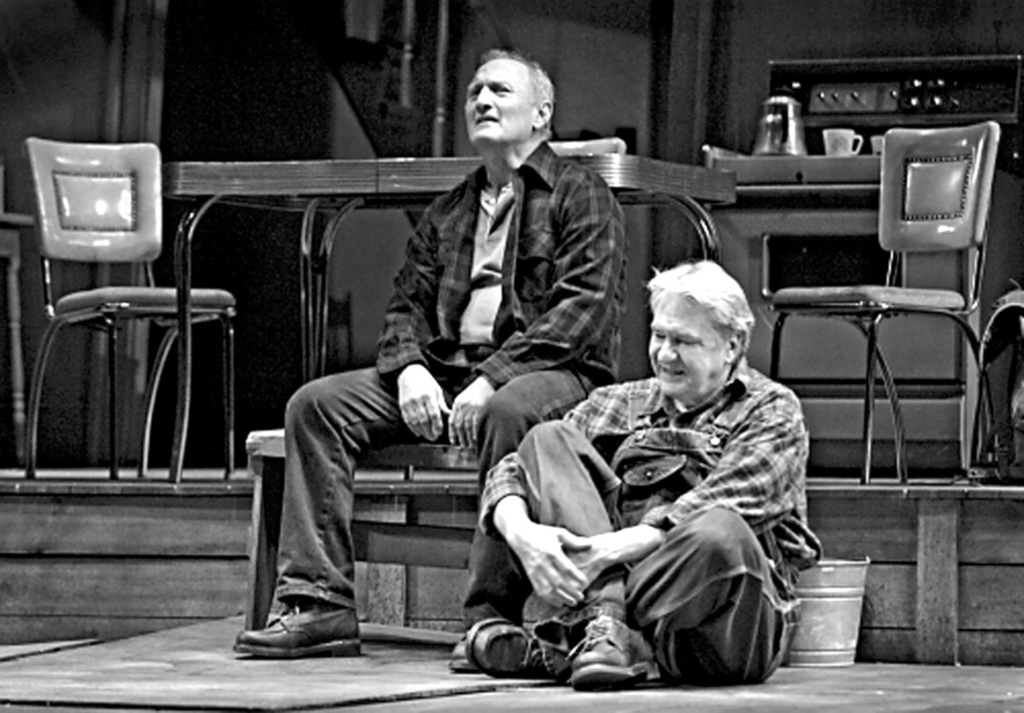 It could be easy to make too much of The Drawer Boy. It’s certainly the Kansas City Repertory Theatre’s most affecting, involving production since Jitney, almost two years back. The gentle, rural comedy darkens as it becomes a pained psychodrama of memory and storytelling.

This is the final show in an otherwise leaderless, at times bloodless season of trifles at the Rep. The Drawer Boy has about it a winning humility and an old-fashioned sense of what a serious theater company owes its audience. This is not just the reassuringly familiar, which we got from this year’s stubbornly unrevelatory To Kill a Mockingbird, or old razzle-dazzle, found in A Marvelous Party. Instead, The Drawer Boy stands as a fine play expertly mounted and acted.

The last show before the debut of new Artistic Director Eric Rosen, The Drawer Boy feels less like a way forward than an inspired afterthought, a humble yet meaningful gift from someone who has lately been spending too much on us to too little effect.

It’s a nice gift. As directed by Jeff Church, the wizard of the Coterie Theatre, the show is crafted, planed and polished. Lights, sound, sets and staging coalesce into a seamless, emotional whole. Those individual elements are properly subordinate to the script and the actors, which doesn’t always happen at the Rep. Even with what I must assume is a much greater than usual budget at his disposal, Church approaches this small story with principled asceticism. The Drawer Boy takes place entirely on the grounds of a small farmhouse and concerns the lives of Canadian farmers who enjoy nothing more than counting the stars. No need to build an elevator or cruise a turn-of-the-last-century jalopy onstage — tactics familiar from the reign of the last artistic director. In a show about counting stars, this would constitute light pollution.

Church focuses the performances, which are superb. Beneath a raggedy, ’70s-style mop, David Graham Jones plays Miles, an eager Montreal actor journeying to farm-country Canada. Miles is gathering inspiration for a play about rural life, so he shacks up with a pair of farmers, Angus and Morgan. We quickly learn that Angus, played by an excellent Gary Holcombe, has suffered some sort of brain trauma, something that has so tattered his short-term memory that Miles must constantly reintroduce himself. Angus is tended to by Morgan (Gary Neal Johnson), a childhood friend who, in adulthood, is not only Angus’ caretaker but also his memory. Most nights, Angus begs Morgan to “tell it,” meaning their history, a gorgeous, painful tale of BFFs, GI brides and a pair of tragedies.

A bit of a naïf, Miles smiles hugely, wears Doug Henning’s jeans and is a hair too slow to figure out that he’s being hazed. Morgan is a cantankerous fellow, much sharper than his stolid, uncomplicated exterior leads Miles to believe. He sends Miles on a series of amusing snipe hunts of polishing rocks and rotating crops. Jones is keyed up here, making Miles’ excitement about farm life as funny as it is touching, and his hare-and-tortoise comic rapport with Johnson carries the show. When Miles overhears Morgan reciting that tragic history, he works the lives of his hosts into his play. This sets up a dramatic and sometimes grim second act that examines truth, memory and the question of who owns whose stories.

Some of the pleasure comes from how rare it is for any serious entertainment to presents rural life as it is. Michael Healey’s script never argues that country living is more or less noble than urban existence. It doesn’t kiss the ass of the farmer, make the city boy an idiot or toe today’s anti-elitist political line. It doesn’t flatter “regular” folks who work hard and play by the rules, people whose lives are as sunny and wholesome as commercials for breakfast at McDonald’s. At the same time, it never disdains rural folks for, say, a general booklesssness or voting against gay marriage.

Church’s direction is doggedly straightforward. Several times, his simple staging wrings real tension from the material, especially in the moments when a character makes his slow way around the house and into hearing range of conversations that would be better off private. In the showy role of Angus, Holcombe is scrupulously unmannered, never risking realism for sentiment. Johnson is a gritty marvel, funny as hell but also touching without ever forcing it. His Morgan is a coot, dedicated above all else to routine. But in the story he tells Angus — and in all that unravels as the show proceeds — we sense how he got this way.

As planed as this production is, Michael Healey’s script sometimes jumps too quickly from light comedy to an agonized drama of identity. In the last 20 minutes, everything comes to a predictable head, and these farmers who have for decades allowed habit to scab over everything in their lives that has ever hurt dig too hard and too fast at their past wounds. The actors mostly sell it, nimbly handling the shifts of genre. By the time everything had sort of worked out, I was mostly thankful that the Rep had, at last, scaled back the spectacle in favor of the human. As Rosen prepares this venerable institution for the fall’s new season of hip-hop musicals (promising) and Tennessee Williams (oh, why not?), it’s likely that this pleasure — a solid, serious, entertaining, unfamiliar show — is just a happy accident of changing times.

E-mail the author at Alan.Scherstuhl@pitch.com