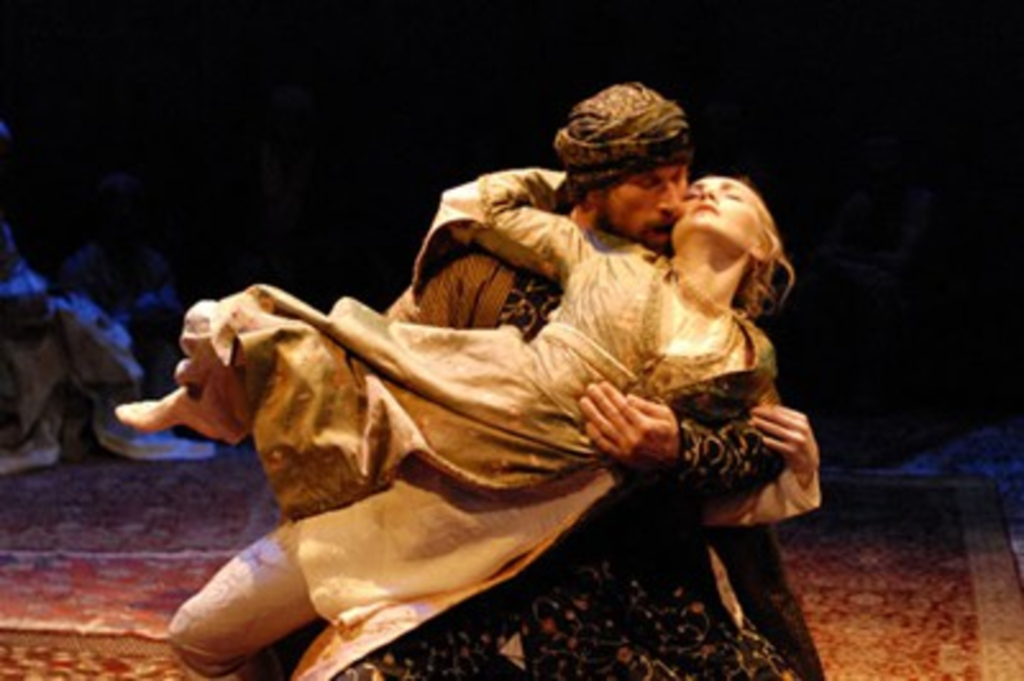 Toward the end of writer-director Mary Zimmerman’s adaptation of The Arabian Nights, actor Allen Gilmore, playing a man who hears and forgets a melody so beautiful that he searches through “the whole of Iraq” to hear it again, delivers a stirring account of the power of great art. “Time was frozen in my blood,” he says, “and I left the prison of my skin and became other than myself.”

I felt something like that a half-dozen times during the Kansas City Repertory Theatre’s two-and-a-half-hour production. I felt it during the drum-and-dance opening, when the cast storms the stage, unfurls sumptuous Persian rugs and transforms a drab (and modern) Baghdad into the kind of lush, imaginative play land that you’d expect inside Aladdin’s lamp. I felt it the first time dawn interrupts one of Scheherezade’s stories, and her new husband — a king who has been murdering a wife a day for years — can’t bring himself to end the tale by slitting her throat. I felt it at the mystery and beauty of an athletic seduction; at the vision of a sultan’s ship lit up on the water; at the way tales tumble upon tales, with new ones starting before the old ones have finished.

Christ, I felt it at the fart joke.

For all the beauty of T.J. Gercken’s lights or the oud and drum music played by the onstage cast, most of these 1,001 nights are comic. Long before that story of “The Forgotten Melody,” audiences are treated to “The Tale of the Wonderful Bag,” a trifle that Zimmerman (attuned to theater’s wildest possibilities) puffs up into a comic showstopper so giddy and grand that the show, quite literally, is stopped. Both a Kurd and a Persian lay claim to a small bag that has been discovered in a bustling Baghdad marketplace. At the behest of the official in charge, they each attempt to guess its contents. What followed, on opening night, was lengthy, seemingly improvised madness from Ramiz Monsef, a rangy New Yorker who comes on with an irresistible hip-hop bluster. “This bag is my bag,” he shouts, before inventing a parade of items, animals and “1,000 Kurds all ready to bear witness that this bag is my bag!” I won’t quote further because (1) it’s not in the script, (2) I was laughing far too hard to get any of it down, and (3) I could journey the whole of Iraq and probably still not remember the best of it. I laughed and laughed. The older women sitting next to me laughed and laughed. Their laughter made me laugh even harder, which further spurred them on, until we were all laughing so hard, the actors actually nodded to us, and this made it all the funnier.

Zimmerman’s Arabian Nights is like that imaginary bag. It’s crammed with stories, music, sex and pageantry, probably well beyond its capacity. Belly dancers, tumbling lovers, peek-a-boo burqas, threats of beheadings and a quartet of lovers are squashed together in a privy to avoid a cuckolded husband. The humor is so merry in its baseness that it crashes through the lowbrow and winds up somehow highbrow.

Direction and performances are free­wheeling but virtuoso. Sofia Jean Gomez’s Scheherezade is sometimes a calculating ringmaster and sometimes a storyteller as entranced by her creations as we are. As a man who farts so extravagantly at a banquet that he has no recourse but to leave town for 10 years, Evan Zes maintains a posture of hilarious dignity even as others endlessly raspberry their arms behind him. It goes on and on, while the Rep crowd howls like teenagers watching Borat and Zes stands there as though he’s a statesman posing for a coin.

It’s ravishing, but it’s not perfect. I wish some of the cutesy anachronisms had been cut. I wish Zimmerman didn’t save all the weightiest stories for the second half. I wish the show let up a little more often. I wish that the stories’ thematic complexities more often reflected Scheherezade’s plight or the modern-day Baghdad with which Zimmerman opens and closes.

Mostly, I wish theater this transporting wasn’t so rare.

The production is a joint venture with the Berkeley Repertory Theatre and Chicago’s Lookingglass Theatre Company, which means most of the designers and actors are from out of town. (Daniel Ostling’s set and Mara Blumenfeld’s costumes are stylish and memorable.) A year ago, I might have complained about this. The Rep was always hauling in out-of-towners to do jobs that plenty of Kansas City theater professionals could have done better. Right now, under artistic director Eric Rosen, the Rep seems to hire national pros because it is, at last, a national theater. Here and in director David Cromer’s triumphant The Glass Menagerie, Rosen and company have given Kansas City — and the country — popular art that is art before all else.

Stunned by this turnaround, eager for the next show, I have just one question for Rosen: Any chance you want a crack at managing a professional baseball team?