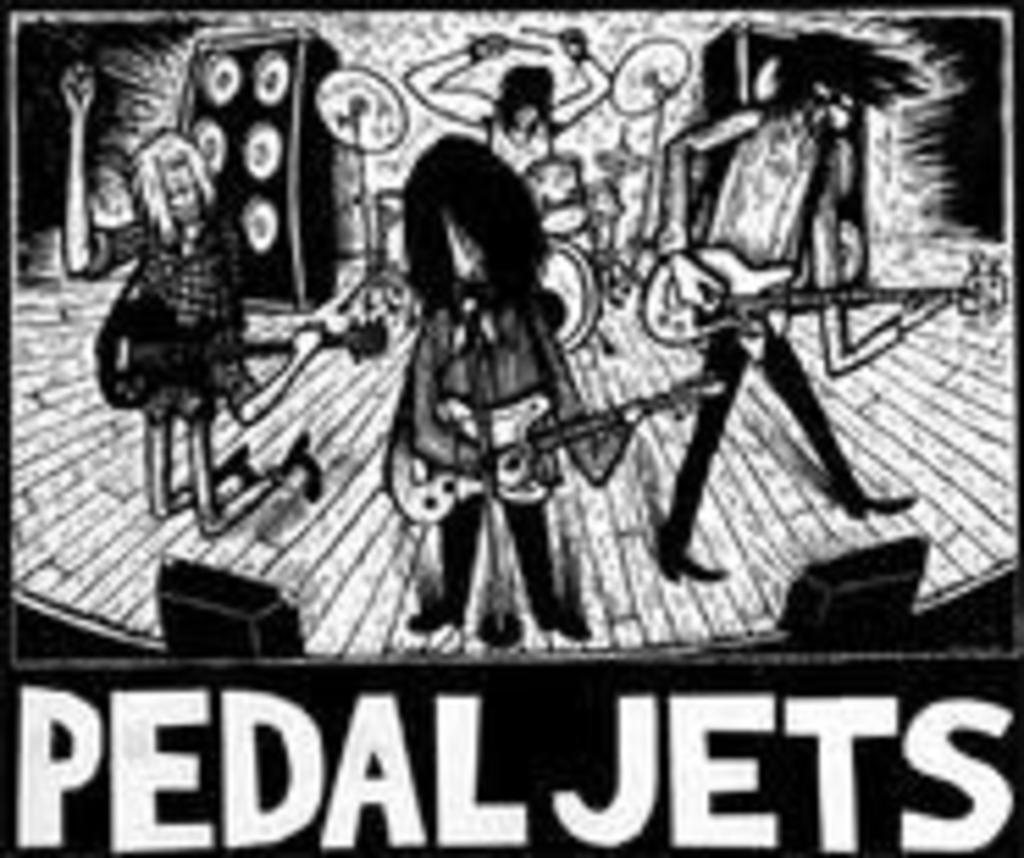 I am not the Wayward Son. Nor am I Megan Metzger, who’s now taking over this space every once in a while for a column called Heartbeat City. No, I am the Buckle Bunny. The name Buckle Bunny implies a loose woman who collects belt buckles from champion cowboys. I like bull riders all right, but most nights it’s a lot more fun to catch a rock show than a rodeo in this cowtown. And I’ve glimpsed impressive chunks of metal holding up the pants of the most uncountry musicians. (Stomp your boot if you’ve seen the real scorpion encased in Pixel Panda and Beautiful Bodies member Luis Arana‘s buckle.)

Recently, an older KC band called the Pedaljets spun me a story about regret and second chances. The Pedaljets are singer and guitarist Mike Allmayer; drummer and singer Rob Morrow; lead guitarist Phil Wade; and bassist Matt Kesler, who wears motorcycle boots with little buckles on them.

You may have seen them at the release party for the OxBlood Records First Blood compilation at the Record Bar last month. They roared through a set of jangly rock songs, sounding faded but not too dated. It was the first time the band had played out in more than a decade.

The Pedaljets played a lot in the ’80s. They toured alongside such future buzz bands as the Flaming Lips and were constantly compared with the Replacements (for which the band opened in 1989). “A lot of that’s a big blur,” Kesler says. Among the unforgettable moments: a show in Minneapolis with Hüsker Dü, when Prince unexpectedly dropped in and asked to jam on the Pedaljets’ equipment. (They let him.)

I was but a grade school munchkin in
Husker land (Nebraska, that is) during the Pedaljets’ glory days. But the band was kind of a big deal here.

The Pedaljets recorded two albums of college rock, Today, Today (with John Harper on lead guitar) in 1988 and The Pedaljets in 1990.

The latter spawned a video (“Place in the Race”) that landed on late-night MTV, but it also broke up the band. The Pedaljets was a label-demanded rush job that embarrassed the outfit it was named for, no matter what anyone else said. “We literally went to a studio and spent 24 hours there,” Morrow says. At the end of the day, Communion Records put out the rough draft as an album decorated with artwork by Archer Prewitt. The band says the cover was the best thing about The Pedaljets.

“The record blew,” Kesler says. And so, they all went on to other things: Morrow played in Allmayer’s new band Grither before starting art school. Post-Grither, Allmayer kept writing songs but focused on a day job. Wade eventually joined the Wilders. Kesler tours with a children’s music band called the Doo-Dads and runs Midwestern Musical Co. in the same building as El Torreon. Yet, The Pedaljets remained a thorn in everyone’s side for close to 17 years.

Then, last January, the band reunited to talk about old times and listen to the rough cuts that inspired the doomed studio versions. “The demos sounded great,” Kesler says. “There was some kind of magic going on there.” Paul Malinowski, ex-member of Shiner and A Season to Risk, recognized it, too, and encouraged his friends to fix the mix.

In no rush this time, the Pedaljets have tinkered for more than a year at KC’s West End Studios. Most changes are subtle: Morrow laid down a new drum track for “Long Distance Dead Man.” The last track on The Pedaljets, “Small Towns,” now leads off the batch of new mixes. “By and large, it’s pretty much the same record,” Morrow says, “except it’s deluxe.”

You’d have to be a buckle bunny to get your paws on an advance copy of The Pedaljets, take two. But anyone can catch the band live Saturday at the Record Bar.