The High Life: The Life and Times hits the road with a joyful new album 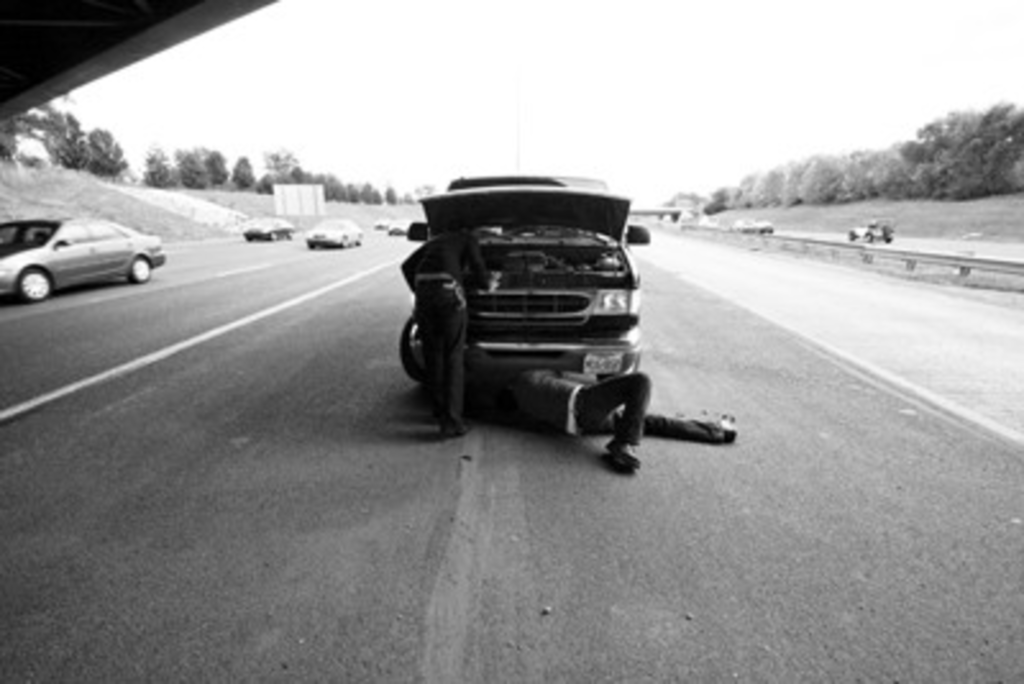 Even for a rock-and-roll band, the road out of Kansas City is hard to love.
Past the edge of town in any direction, the land opens to an unrelenting blandness of farmland and prairie, gas stations and highway interchanges and cigarettes bouncing on the asphalt at 70 mph. Box stores, industrial buildings and parking lots herald another town, but it’s always just the edge.
The stops along the way are rock clubs, which are pretty much the same all over the world: posters on the walls, well-worn couches backstage, bars, bottles and bands. There are a few hotels on this road, but most often, sleep is on the floors of friends’ houses, where foam pads are unrolled and then rolled back up in the morning.

continued from page 9 On some of those mornings, the van breaks down. Fixed fast, it rips up more miles — whether 70 or 700 — to the gig that night.

This is the road that the Life and Times has chosen.

It has led the band to more than 300 shows in six years, from the first out-of-town show, in April 2003 in St. Louis, to its latest this past March, in Austin for South By Southwest.

It’s not the road to fame. But when you see these three men — Allen Epley (age 40, guitar), Eric Abert (age 33, bass) and Chris Metcalf (age 33, drums) — get on the stage and play, and when you hear the music and see the images from this road, you begin to understand why they wouldn’t have it any other way.

In 2006, the road led past beaches and under balconies in Spain, and through crowded cities in Japan.

In Japan, a girl asked if the band was famous. A filmmaker had come along on the trip to shoot a documentary, which would later be titled Life Is Pleasure (it’s now on DVD). He wasn’t in the band, but when she asked, he didn’t hesitate: “No.” And after he said it, his mouth curled into a subtle, impish smile: But they’re here anyway.

And when the show begins, there’s no doubt about where the band is.

First, there are the lights. Four waist-high bulbs blaze inward, shining on the glistening, eyeless-looking faces and sweat-matted hair, and on the steam — just a little wisp — rising off Metcalf’s shoulders as he bashes out a harried 4/4 time. The band has used these lights since day one, a theatrical device that allows The Life and Times to set its own visual stage no matter where it plays.

Then there is the sound. “Blissed out,” the band calls it, centered and spurred onward by Metcalf’s iron-steady and at times furiously complex drumming. Abert’s bright, chunky bass rides alongside, laying a tonal foundation for Epley’s melodic, effects-laden guitar and effervescent vocals.

It’s a loud, textured sound that has evolved from the Midwestern rock tradition of the ’90s, from a scene that was sonically bordered by the sparse, ragged noise-rock of the Jesus Lizard in Chicago and the fizzy, psychedelic guitar orchestrations of the Flaming Lips in Oklahoma. Somewhere in there, of course, was Epley’s former band, Shiner.

The musicians of this school were, for the most part, young men living together in shitty rental houses, wearing worn T-shirts and jeans in the color spectrum of black to navy blue. They poured themselves into writing heavy, intricate rock that owed huge debts to My Bloody Valentine and Dark Side of the Moon.

But that was years ago. Now, with their second album, Tragic Boogie, Epley, Metcalf and Abert have broken away from the past and have forged something new.

At the same time, however, they prove that three dudes from the Midwest who grew up on Pink Floyd and Led Zeppelin can produce music that, while not as commercially successful as their idols’, is no less transcendent.

Though the Life and Times’ 2005 debut, Suburban Hymns, was lush and sometimes beautiful, it felt weighed down by a pervasive somberness, a minor-key mood that grasped upward but couldn’t quite reach the light.

Tragic Boogie is different from the beginning. “Que Sera Sera” begins with the striking of a major chord that echoes rapidly and repeats, building up life-giving momentum. A drum roll sounds the call, and soon all instruments are engaged in a melody that is undeniably joyous.

Coated with effects, Epley’s voice breaks through as if it’s on a crackly radio station cranked up all the way. So fare thee well, he sings. They’ve come to take me home.

“It’s hard for Kansas City rockers to get out of this mode where everything’s like Slint or the Jesus Lizard and everything’s dark,” Epley says. “We wanted some positivity.”

That’s not to say the Life and Times has gone soft.

On track two, “Fall of the Angry Clowns,” a bright, minimal, harmonized guitar riff is juxtaposed by sharp, thudding bass and reverberating drums. To keep things out of the mire, stacked vocals on the chorus deliver one of the album’s catchiest hooks.

The album is a study in the parley between spacious noise and focused melody. The climaxes of songs such as “Dull Knives” and “Tragic Boogie” evoke the intensity, range and swooning beauty in the best parts of Radiohead’s OK Computer. Even the instrumentals on Boogie — “Pain Don’t Hurt” and “Lil’ 4 Notes” — are shapely and memorable.

For all of its gigantic sound, Tragic Boogie was recorded in Epley’s house in South Hyde Park. Recording at a studio might have meant creative interference (“Engineers are very stuck in their ways,” Epley says). To save money and keep firm control, the band built a studio in Epley’s stone basement.

They recorded it in late 2007 and early 2008, then took the recordings to be mixed by Jason Livermore at the Blasting Room in Fort Collins, Colorado. Livermore is known for turning out the high-octane, punk-influenced hard rock of bands such as Rise Against and Alkaline Trio. Livermore dialed back the noise, adding space and refinement to the rough mixes.

The album is pressed and ready for an April 14 release on the Portland-based indie label Arena Rock. Beginning with a local CD-release party April 5 at the Record Bar, the band heads out on the road, going through the South, up the East Coast and then westward back to Minneapolis.

Chances are, neither this tour nor the release of Tragic Boogie, for all its rock awesomeness, will bring these Midwesterners closer to fame. But that’s not the point.

And the road is long.

Photographer Forester Michael traveled with the band through the latter half of October 2008.