‘It’s gonna get emotional’: The Heavy Figs’ Chris Teasley on the band’s farewell this Saturday at Kaw Valley Public House 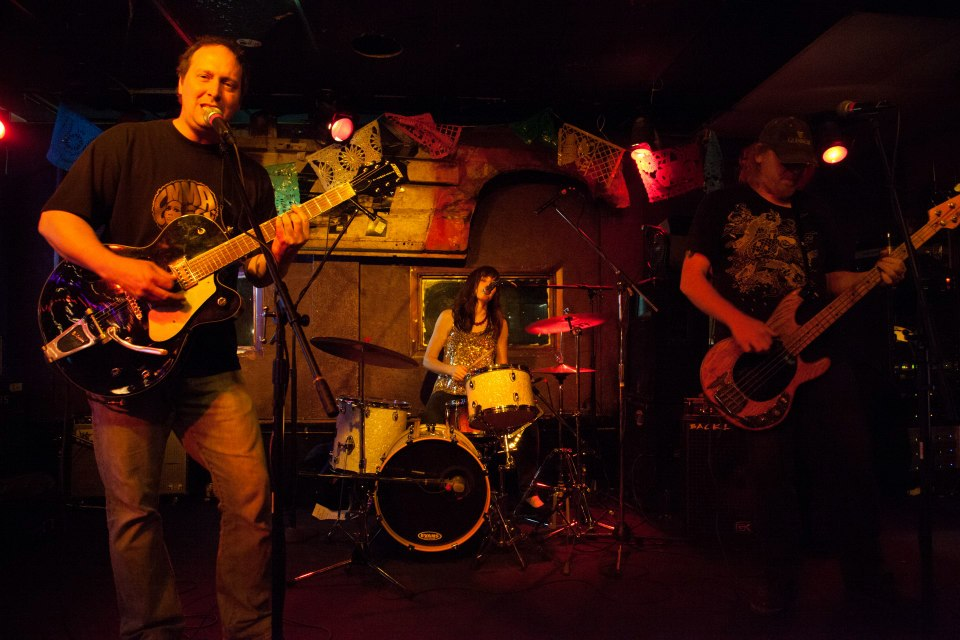 I’ve called up Chris and Sara Teasley — two-thirds of the Lawrence rock and roll trio the Heavy Figs — to talk about the end of the band they started with John Cutler nearly ten years ago. Chris and Sara, who are also married, are about to move to Gainesville, Florida.

“It’s been a super-crazy day,” says Sara, the Figs’ drummer. “We thought our house was listing at noon, and it listed at midnight. I guess people are looking at houses, because it seems like every fifteen minutes, we have to leave our house for an hour.”

“This has kind of been heading our way for a long time, because of Sara’s folks,” Chris, the band’s guitarist, explains. “So, it’s here now.”

The Heavy Figs formed in 2010 in Lawrence. They played old-school rock tunes for an audience still thirsty for guitar-driven, blues-influenced music. Alongside the likes of the Mad Kings and Vedettes — with whom the Heavy Figs will be sharing the stage at their farewell show this weekend— they’re a part of a underground rock scene that also includes acts like Douglas County Quintet, Real Custom 5’s, and the Broken Arrows. They sometimes refer to themselves as the Lawrence Music Mafia, a “mutual aid society for those local musicians who were Rocking Back In The Day and are Still Rocking Today,” according to the Facebook group.

“It’s all like a family of bands out there,” Sara agrees. “What we’ve found — in Lawrence, at least — is that they still like rock ‘n’ roll out there. Good, straight-up rock.”

The Teasleys joined up with bassist and singer John Cutler (Parlay, Tenderloin) after the dissolution of their former band, the New Lost Souls. Chris had played with Cutler in both the Irish-inflected act the Kellihans, as well as a Kinks and Rutles tribute act called the Rinkles. Sara’s brother, Andy Jordan, who was the New Lost Souls’ bassist, moved to Austin, and as Chris puts it, “We were lookin’ to keep rockin’. So, we thought that we had to get John in on this. That’s sort of the birth of the Heavy Figs, there.”

The power trio ended up with a sound that was high-energy rock ‘n’ roll; they play mostly original tunes, although you’re equally as likely to hear a song from Cutler’s old band, Parlay, or maybe even a cover of Status Quo’s “Paper Plane.” In Teasley’s estimation, the band has played an average of two shows a month over the last nine years — something around 200+ performances — but, oddly, hasn’t put out so much as a single.

“I think we just assumed for the first couple of years that we’d get something together and make a recording of some sort,” Chris says. “Then, after a while, when it didn’t, it just became a point of pride or something.”

He laughs and continues: “Whether we’re playing to a packed house or nobody, we really just share that same love of Nuggets. That ’60s garage and that heavy rock, circa ’69-73. We just like to rock, you know? We decided in the beginning that us playing with John — and I think it’s mutual — it’s just worth it to rock.”

As we wrap up, I mention that it’s sad that the Heavy Figs will be going away, as they’ve been a reliable source of rock ‘n roll for so long, but also that it’s nice that they’re going out on their own terms.

“Oh, man, it’s awesome,” Teasley concludes. “It’s gonna be a blast. It’s gonna be emotional, you know? It’s been getting weird, because it’s just been a part of every week for so long. It’s tough to let it go, but this last run of shows? There’s been such an outpouring of love, and it’s like, ‘My gosh, we should’ve quit years ago.’”

The Heavy Figs’ farewell performance is this Saturday, June 8, at the Kaw Valley Public House with the Mad Kings and Vedettes. Details on that show here.