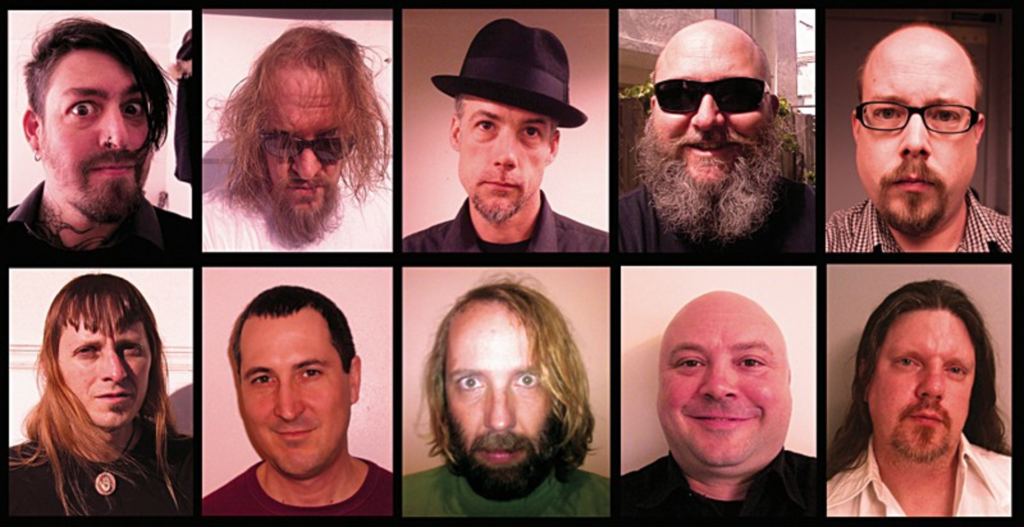 Bass player Darren Welch is sipping a Miller Lite at the headquarters of his band, the Hearers. He’s in the backyard of the Merriam home of guitarist and sound engineer David Moore. It’s a gently rainy day, and Moore’s garden is turning green. Though still grayed by winter, the 4-inch garlic shoots and tomato vines suggest the burst of life just around the corner.

“Back in 1994, I had some issues with anxiety, and I didn’t want to play live anymore,” Welch says. Standing at about 6 feet 2 inches, the two — Welch with long hair in braids and Moore with a shaved dome — could be linebackers or professional wrestlers. But their demeanor is anything but combative.

“My bandmate at the time in Amputatoe, Marc Tweed, liked the idea of focusing on the studio, so we started working with David [from the bands Bonesaw and Priss], who had a four-track cassette recorder,” Welch says.

“I could really empathize with Darren [Welch] because I’ve had similar issues for years,” Tweed says by phone, from his home in Seattle. “I couldn’t imagine not making music with him, even if being on a stage wasn’t in the plans.”

Stage strain wasn’t the only reason that the Hearers took to the studio. “It was an excuse to work on more experimental material,” Tweed says. “As roommates, before [Welch and I] were ever in the same band, we would lock ourselves in the little jam room and fire up looping pedals, my old Sequential Circuits Pro One synth, a bunch of weird improvised instruments, and just make noise for hours on end.”

“They didn’t want to rule out music because they couldn’t play it live,” Moore says.

The Hearers’ catalog is filled with studio atmospherics that certainly don’t suggest a live show. But the climax of the Hearers’ new album, In Dreamlife, is different.

“The Sultan of Sultan’s Fever Dream” is the most obviously catchy song on the record — horns and glockenspiel, answered with bouncing-ball vocals — but it’s also difficult and dense. It’s followed by the gentle plea of “Stay With Us,” which features lilting tenor harmonies over bass, snare and shimmering guitar strums.

In Dreamlife is far more than a sonic exercise. It’s a beautiful, ambitious album, with room in its contours to recall Wilco, Pink Floyd, 10cc and the Byrds. It’s hard to believe all of this sound comes from a local act, let alone a basement in Merriam.

That basement, though, holds the entire history of the Hearers from its humble beginnings. The first result was a cassette release in 1998 (recorded on a four-track still sitting by the mixing board). By 2001, the Hearers had seven members and had recorded more than enough material for a full album. Writer (and William Burroughs editor) James Grauerholz took an interest in the band’s material and
financed the band’s self-titled debut. Since then, the Hearers have released another full album and an EP. Along the way, the band has grown to 10 members, representing too many acts to count. (Tweed alone has played in at least 18 bands.)

The Hearers are a bit like a family: “Once you’re in the band, you’re in,” Moore says. Similarly, everyone in the Hearers gets vocal respect from other Hearers. Welch and Moore all but step on each other’s toes praising trombone player Mike Walker for the horn arrangement on “Stay With Us.”

“I could hear this thing in my head,” Welch explains, “but Mike knew how to do it.”

The original core trio is the key. Welch writes achingly pretty songs. Tweed offers a dose of the perverse. And Moore has grown up beside them, expanding his knack for studio work, from a Scully 1-inch eight-track recorder — the kind of machine Led Zeppelin and the Stones used at their peaks — to a Neotek mixing board, various vocal compressors, and other pieces of equipment that he fashioned himself.

Still, the heart of the record is in the thoughtful songwriting.

“I guess there’s some pretty personal themes in there,” Tweed says. “With ‘Sultan,’ I’d just kicked my father out of my life for the third and final time. On the flip side, the song ‘Sylvia’ is an ode to my paternal grandmother, the late Sylvia Tweed, who was one of the best people I’ve ever had the honor of having in my life.”

The appreciation for the complex ties that bind these musicians together fuels the Hearers’ work. Tweed explains the band’s growth pattern: “We started out as dark, minimalistic, experimental, then dabbled in country music a little, psychedelic folk, flat-out noise,” he says. “And now, as our cello and keys player, Chris Braun, says, ‘When people ask what kind of music the Hearers make, I just say, art rock.’ That’s sort of how I see our evolution.”

That isn’t artistic pretense. It’s the shared adventure of artists who are more capable than ever before.