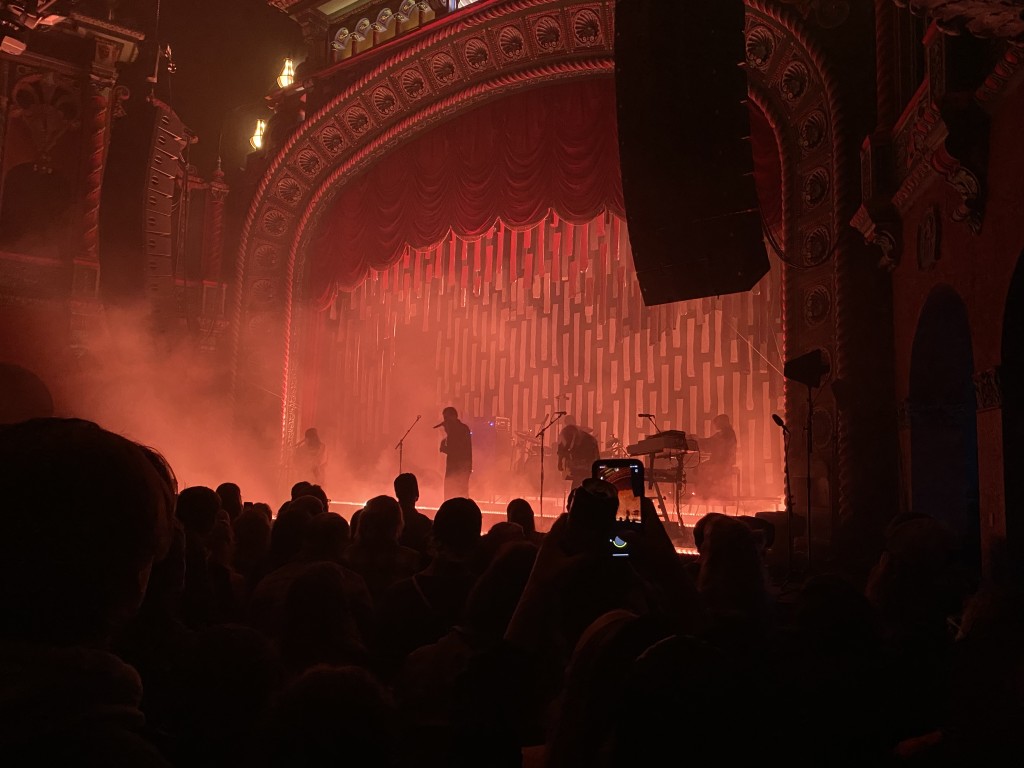 The Head and the Heart keeps up the pace with another cinematically-lit track. // Photo by Michael Cripe

No one expected folk-rock sextet The Head and the Heart to offer a cinematic experience when it came to Uptown Theater earlier this week—but it did that anyway.

Expectations were set when raspy, English singer-songwriter Jade Bird laid out an impressive opening act, bopping between belted blistering cuts like “I Get No Joy” and a Fleetwood Mac cover, while still making room for more sincere, quiet moments.

Every lyric got the attention it deserved but resulted in an evening introduction with little surprises.

In retrospect, Jade Bird’s impressive-yet-safe opening act couldn’t have been a better appetizer for the main course that flickered onto the stage at 9 p.m.

But if the band’s reveal at Uptown can be described as a “flicker,” then its kickoff song, “Every Shade of Blue,” was an explosion of color. As the room was drowned in deep blues that wallpapered lyrics like, “It’s been a long year, the wrong year, to be left alone,” it became comfortingly clear that the night was just getting started.

Fans that know the eclectic group’s music may not be quite as privy to its concerts and the pace at which it flows through hit tracks. “Every Shade of Blue” rolled right into “Don’t Show Your Weakness,” which quickly burned into the pop-infused “Hurts (But It Goes Away).”

Not a single break came between the first six songs of the set. Conversational in-between breaks are standard practice for most groups with which The Head and the Heart share a genre, so it was refreshing—and a nice surprise—to see an emphasis on a breakneck pace. Of course, the evening would have surely been soured without at least one or two brief chats.

Violinist and vocalist Charity Rose Thielen, whose hair looked almost like a pink-and-blue twisted popsicle, noted that it was “surreal to be back” after a long, COVID-induced touring hiatus kept The Head and the Heart (and the rest of the music industry) off the road. “Grounded” is the best way to describe the atmosphere in that moment, as Uptown let out a collective sigh and cheer, knowing they were back in the presence of their favorite hodgepodge rock outfit.

Thielen’s moments of levity were only matched by her vocal beats, which pierced already-great vocal performances from Jonathan Russell and Matt Gervais. Her chime-ins on tracks like “Tiebreaker” consistently brought life to the crowd but continued to check the pulse later on in hard-hitters like “Honeybee.”

This is where that fascinating, cinematic throughline for The Head and the Heart’s live show came into view. While “Ghosts” might swing through the show like a spectral wrecking ball, “Shadows” would serve as proof that the group could successfully build back to genuine serenity.

The Head and the Heart’s answer for a genre plagued with samesy concerts is sonic variety, but also solid pacing within that variety. The night at Uptown was brisk, even with a three-track encore to round out the two-hour, 22-song set.

With bold lighting choices that danced with the ever-rotating wheel of sounds The Head and the Heart produced, the weekday night felt more like a movie—one that Kansas City has waited two years to see.