The Hand, KC’s one-of-a-kind art quarterly, gets a gallery exhibition equal to its mission 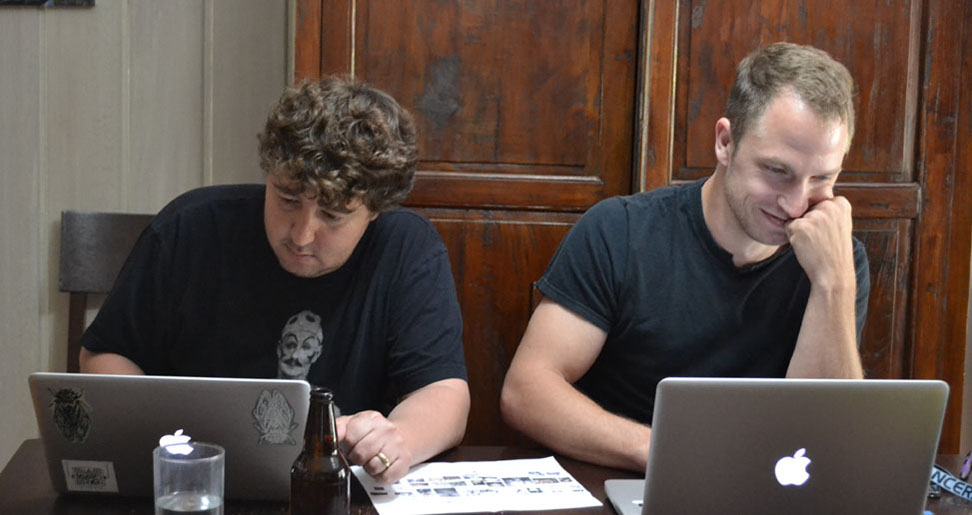 To call The Hand a mere magazine confuses the publication — now four years, 17 years and several hundred artists into its run — with one that doesn’t include a handy glossary. What its founders, photographer and teacher Adam Finkelston and printmaker James Meara (above), call a “magazine for reproduction-based art” is itself an art object.

So it’s fitting that The Hand marked its fourth birthday in July by opening an exhibition at the Leedy-Voulkos Art Center (2012 Baltimore). Mudras, on view through August 26, includes 49 original works by 47 of the artists whose work has appeared in the quarterly’s pages since its 2013 inception.

“It’s the only magazine I know of that combines photography and printmaking and thinks about them in the same ways,” Finkelston tells me. The latter includes copperplate photogravure, photo etching, chemigram, mezzotint, cyanotype, lithography, monotype, and more — processes done by, you know, hand.

So The Hand showcases the mechanics of creation and reproduction. But it’s also about honoring what artwork looks like in person, which is why, in addition to curating submitted work into the quarterly publication, annual shows have always been part of Finkelston and Meara’s plans. Mudras is the first of its four exhibitions to appear in KC, though.

Finkelston walks me through the space, his enthusiasm palpable as he shows me the art, which is indeed striking up close. These are far from snapshots or even well-executed straight documentary or landscape photos. And because the creation of each piece involves science and a range of terminology similar to what’s found in ceramics, I also get a glimpse of Finkelston as patient teacher. (He works with kids on darkroom techniques and alternative-process photography at Shawnee Mission East High School.) He wants viewers to wonder enough about the wall cards to go ahead and Google: “If you look up palladium print,” he says, “you will find it.” (Yes, there really is a two-page glossary in The Hand, outlining how the artists constructed their images.)

Each 50-page issue of The Hand includes a printmaking feature and a photography feature, generally interviews with artists. The editors start with an un-themed call for submissions, then sift the results for what they find compelling — “whether it’s in the simple line, the making of the piece, the image itself, or that it has some kind of narrative,” Finkelston says. They also do their own image sleuthing, reaching printmakers and photographic artists around the world via social media, and looking especially for those who use alternative (sometimes called antiquarian) processes. The resulting full-color spreads teem with experimentation. The product is a gorgeous throwback to the heyday of glossy art journals, and it shows the editors’ personal investment — in both time and money. And, they say, it’s paid off, with a growing list of subscribers and attention that has opened doors for them as artists as well as providing a platform for like-minded people to exchange techniques.

But being in the same room with the art remains a different experience. Finkelston, who says he was “blown away” by the Developing Greatness exhibition of the Hallmark Photographic Collection at the Nelson’s then-new Bloch Building galleries in 2007, understands this. He’s the first to admit that even the best-looking image on the best-looking page can seem flat. “If things are handmade, it’s important how they feel, how they look, what the texture is like, how the ink layers look differently,” he says.

At Leedy-Voulkos, the strong selections include Mike Koerner’s “Tendrils No. 5,” a chemigram on wet-plate collodion made expressly for Mudras. Finkelston speculates that Koerner, who is also a chemistry professor, probably “just covered his hand in chemistry and developed” the results. What you see is a ghostly mosaic of radiating crystalline splotches, grouped into the shape of the artist’s hand like bits of glowing white lichen. The reflectiveness of the tin plate the image is printed on gives it light, and while the reproduction in Issue 17 of The Hand is pleasing, the life-size thing itself dances with living dimension. 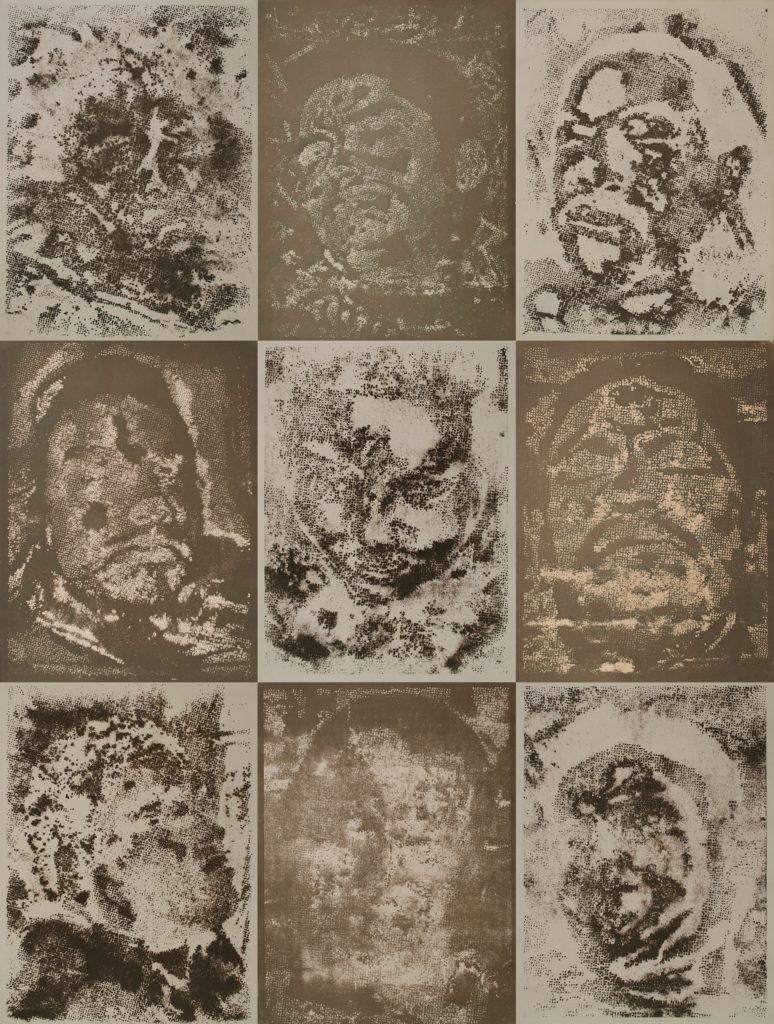 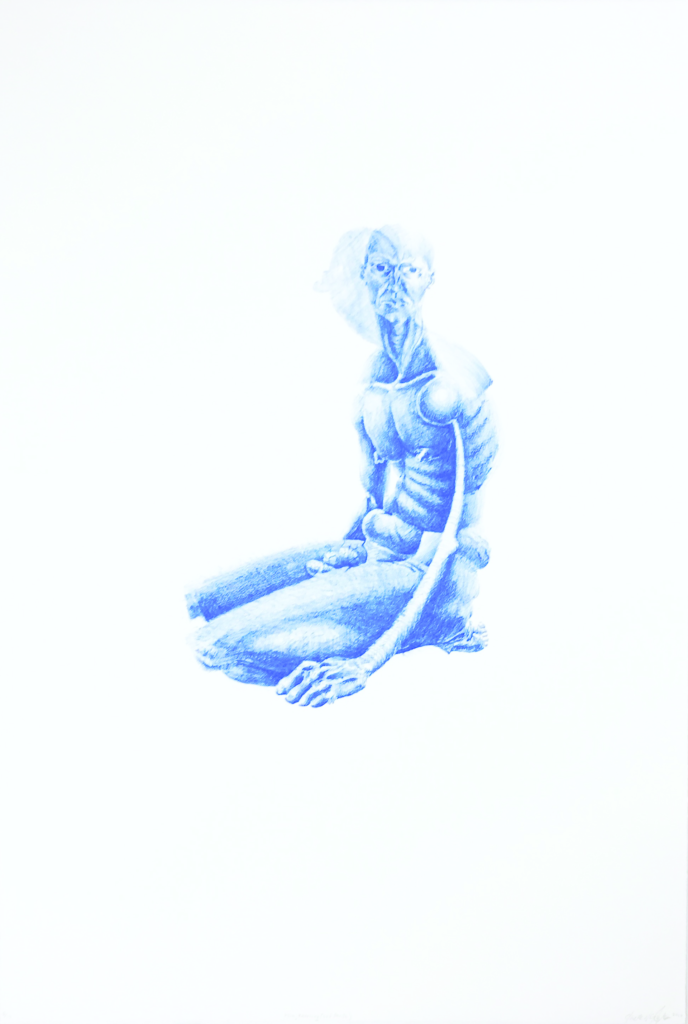 Thayer Bray’s two lithographs with ink, “Her, Sitting (kneesuck),” in red, and “Him, Kneeling (Sad Panda),” in blue (avove), demonstrate how excellent draftsmanship translates into the world of print, as do Aaron Coleman’s lithograph with chine collé (“The Dummy”) and Joshua Jay Johnson’s Albrecht Dreher–like “Nameless Deeds” etching with engraving.

Then there is Terri Cappucci’s small, brilliant gumoil print, “Loblolly Pines” (above), which depicts its title tree species. Cappucci is one of two people worldwide, Finkelston says, who have mastered this particular multistep process. It starts with the same chemistry as a gum-bichromate print but involves exposing a transparent image to the unpigmented potassium dichromate and gum arabic, then rinsing away the parts that do not harden up in the reaction, then washing over the faint matrix of the picture with oil paint. When it works, it’s uniquely beautiful.

“It’s part of our mission that people come see and appreciate art as a physical object and not just on a computer screen or even in a magazine,” Finkelston says. The Hand’s exhibition shows how important that mission is, and how rewarding to the viewer.