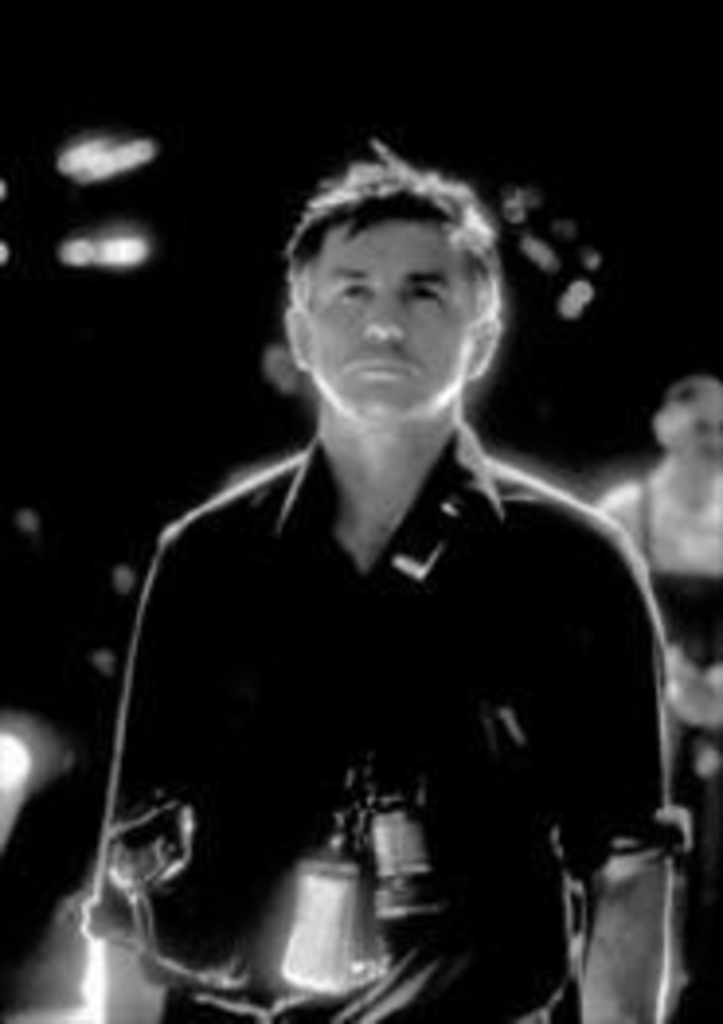 At this moment, Baz Luhrmann, control freak and self-proclaimed ringleader of conspirators “who conspire to something greater than ourselves,” is not in control at all. The cameraman trailing behind him, like a faithful puppy awaiting treats, does not work for the director; rather, he is in the employ of the British Broadcasting Corporation, and he has been following Luhrmann for months, gathering hour upon hour upon hour of footage for a documentary that will air in England come August. “Don’t mind him,” Luhrmann says, nodding toward the unblinking eye that has been trained on him ever since he began putting the final touches on Moulin Rouge, the director’s third film and the final installment in his so-called song-and-dance Red Curtain trilogy. “He’s invisible.”

But the invisible man, always hovering near, casts a large shadow. Every so often, Luhrmann becomes aware of the camera trained on him, the microphone that captures his every word, pause, breath. He will stop talking, lose his train of thought, then stare into the lens. The 38-year-old director—clad in dark suit and shirt, with his prematurely gray hair pulled behind in a small, sharp ponytail—much prefers to be behind the camera, not in front of it. He needs to be in charge.

Luhrmann—who’s come for a visit with a rather large posse in tow, including two 20th Century Fox publicists; his executive assistant, Paul “Dubsy” Watters; and his musical supervisor, Anton Monsted—sits alongside Monsted in a newspaper office decorated with posters for The Right Stuff and The Great Escape, the latter of which strikes one as the perfect title for Luhrmann’s biography: He makes movies so kinetic and surreal you don’t watch them as much as you disappear into them, a shadow swallowed by night. They leave you exhilarated and exhausted—spent, deliriously and absolutely. His first film, 1992’s Strictly Ballroom, was a coming-of-age tale set backstage at a dance contest; it played like an Aussie Saturday Night Fever starring a would-be Astaire (Paul Mercurio) and Rodgers (Tara Morice), set to the strains of Cyndi Lauper and Richard Strauss. His second, William Shakespeare’s Romeo + Juliet in 1996, set the ancient in the present-day: The cast spoke in iambic pentameter, even as their car stereos blared Radiohead, Garbage and Prince. And now, in the opulent “spectacular spectacular” Moulin Rouge, Nicole Kidman and Ewan McGregor sing Paul McCartney, Dolly Parton and Elton John’s silly love songs to one another despite living in France as the 19th century gives way to the 20th.

The filmmaker explains that his films are ‘tweeners, by which he means they appeal to both the crowd that likes its cinema “artful” and the audience that prefers its entertainment “commercial.” Moulin Rouge, he will say more than once, is his attempt at creating “audience-participation” cinema: He wants ticketbuyers to feel as though they’re on screen, singing to one another; he wants them to join in, to break a sweat, to cheer from the cheap seats. That is why he set Moulin Rouge in the distant, foreign, garish yesterday but spiked it with pop cocktails made of equal parts Nirvana, Madonna, Marilyn Monroe and David Bowie—to get you drunk on pop, to make you blind to things like good taste and good sense. He wants you to laugh at the familiar (say, the way Labelle’s “Lady Marmalade,” with its chorus of “Voulez-vous couchez avec moi ce soir?,” gives way to “Smells Like Teen Spirit” and its chant of “Here we are now, entertain us”), because if you’re comfortable enough, you will be ready for anything.

“I think that what we do is try blindly to remove our tastefulness, because that is the enemy of art,” Luhrmann says. “We make it in a way in which we are without judgment, which is about connection and revelation and decoding for the audience—whatever it takes. We are a circus troupe, and I am the captain…Yes, it is audience-participation cinema. In New York and Los Angeles as we speak, the audience is clapping and cheering at the numbers. Who are they clapping to? The projectionist? No. They’re communing with the rest of the people in the cinema. They’re acknowledging each other: ‘That’s funny, isn’t it, stranger?’ It feels better to commune.”

The Australian-born filmmaker, his voice at once soft and commanding, gives interviews the way he makes movies: His thoughts jump about until they connect, but just barely, to each other. When Luhrmann was trying to get Hollywood distributors excited about Strictly Ballroom—which would go on to become Australia’s most profitable cinematic offering—the director would act out scenes: “waltzing one minute, doing a rumba the next,” wrote producer Tristram Miall in the introduction to that film’s script, published in Australia in 1992. You get the sense he believes every word or thought he utters is an important one—a profound revelation—and he wants none wasted. When he gets on a roll, he is a boulder racing down a mountain, heading toward the village below. Only the cameraman can stop him.

He is asked how he reconciles his ambitions to appeal to both the high-brow and the low-brow. That is, how does one make serious art that sells in the suburbs. He smiles. (As well he should, perhaps: Moulin Rouge took in more than $14 million last weekend, a hefty haul for a movie that cost only twice that much to make.)

“I don’t. I ignore those ambitions,” he says. (Luhrmann damned near speaks in italics, which is to be expected of a man who’s been enamored of musicals since he was a child growing up in his old man’s countryside Mobil gas station.) “You decide what you’re going to make and…make it.” Just then, the BBC cameraman jams his lens in Luhrmann’s face, which becomes serious, thoughtful—and a put-on. He stops and stares down the camera.

“And I was only just getting going,” Luhrmann says, feigning irritation. “I almost had that thought perfect.” Still, he continues, undaunted.

“You just ignore it with unbelievable strength,” he says. “You know what you want to make, what you want to see, and then go about making a code that you think allows people into what that is. If you get seduced in any way into thinking, ‘Would it be more commercial to this or that?’ then…Let me tell you. There are a lot of choices that would have been more commercial. There were really obvious things.

“From day one with Strictly Ballroom, [Miramax Films boss] Harvey Weinstein, who I have respect for as a great ticket-seller, his thing was he didn’t want to use the Cyndi Lauper song ‘Time After Time.’ He would say, ‘That’s such a cheesy ’80s track. There’s a song by Amy Grant, can’t we replace it with her song?’ It was something like, oh, ‘Dancing Shoes,’ and it’s a lovely little pop track, and in Harvey’s mind, Strictly Ballroom was kind of Dirty Dancing, so he was thinking, ‘Can’t we make it Dirty Dancing lite, because that would be easy to sell.’ I am not angry at him for having that point of view, but you can see the reason we chose ‘Time After Time’ was because it was an ’80s anthem, and the reason Tara sang it was because it would seep out there and become part of the audience’s participation with the girl in the picture when she sang the song.”

Luhrmann began working on Moulin Rouge four years ago—and, in a sense, he actually completed the project in 1997, when he and Monsted assembled the Something for Everybody album, which featured music from Strictly Ballroom, Romeo + Juliet and myriad stage productions Luhrmann had directed in the late 1980s and early ’90s (among them a reworking of Hair, this time titled Haircut, and La Boheme, which he will likely bring to Broadway next year). On the disc, which spawned the surprise spoken-word hit “Everybody’s Free (To Wear Sunscreen),” Luhrmann and Monsted commingled Doris Day’s “Perhaps Perhaps Perhaps” with John Paul Young’s “Love is in the Air” with Gustav Holst’s “Jupiter” until the whole thing sounded like one nutty mix tape—a collection you give to a would-be lover, to prove your sensitivity and taste.

Luhrmann hatched the idea for both projects during his three-month journey through, among other places, Cairo, Paris and Marrakesh—a ritual for him once he’s done with a film. He breaks out the backpack, takes his credit cards and loses his responsibilities for a moment. He will get into trouble, he likes to say, and get a little perspective; he’s no longer a director with an assistant, a cameraman and publicists trailing behind him, but a traveler who will lose his ticket just to find his way back home. It is, he insists, the only time he separates his life from his work, which surrounds him: Luhrmann’s wife, Catherine Martin, is his production designer, and his home is constantly filled with assistants and collaborators filling the filmmaker’s head with sight and sound. There’s no way the man from the BBC could go back to England with anything less than a dazzling film of his own: Luhrmann is the director whose life belongs in front of the camera.

For now, at least, Moulin Rouge will be the director’s last “theatrical-quoting” film—no more musicals, at least until the next backpacking trip inspires one. He simply doesn’t feel the need to make one, and Luhrmann is a man driven by need—not, he explains, by wants, which he makes sound so pedestrian. Once, he told an interviewer that making movies like Romeo + Juliet and Moulin Rouge was his “burden.” When asked about that, he shrugs it off as being, yeah, a bit dramatic. But he doesn’t disagree.

“Sometimes I think, ‘Well, wouldn’t it be great to do a James Bond picture? How much fun would that be?'” he says, winding up like a top. “But the things I need to do are things that inform my life. Our work and our lives are inseparable. That’s the deal of the circus life. Someone’s gotta do it. Someone’s going to do music cinema and get it back and make it in our language now, and I just figured that was my burden. I mean, I would go, ‘Do I have to go make this movie? Can’t I just do a fun picture?’ There are a lot of fun pictures I’d like to make without having to reinvent the wheel every time. So I would think, ‘Instead of taking four years, can’t I just make this sexy motion picture that’d be fun to do?’ But, alas, no. The burden is that one needs to confront these things. I am indulgent to say that, but I say it in a state of, ‘When will this be done, Lord?'”

He smiles, ready for his close-up.