The Golden Girls with a dash of The Sopranos 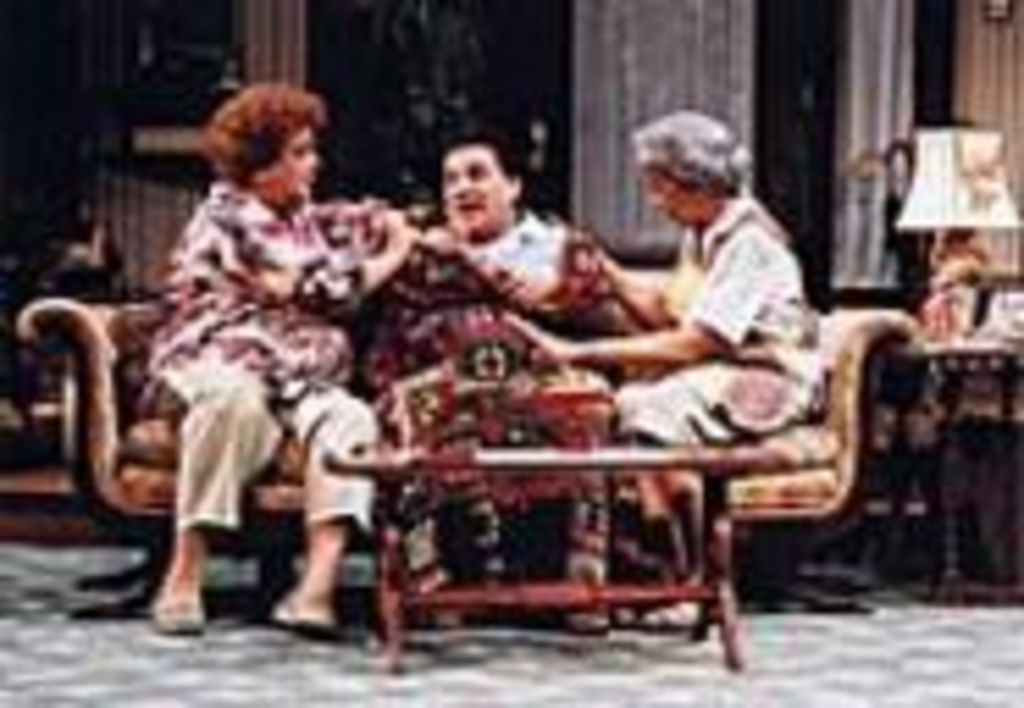 The American Heartland Theatre struck oil two seasons ago with Joe DePietro’s I Love You, You’re Perfect, Now Change, a delightful musical review chronicling the perils and pitfalls of being single. With DiPietro’s new show, Over the River and Through the Woods, that well is discovered to be not so deep.

The show is akin to a television sitcom that pollinates The Golden Girls with a dash of The Sopranos, with neither the former’s timing nor the latter’s brilliant writing and casting. And yet the cast that director Paul Hough gathers in this modest Hoboken, N.J., home makes a valiant effort to deliver the stuff DePietro’s cooked up. If it’s the equivalent of Chef Boyardee — Italian in a tin can — it is entirely digestible.

Craig Benton stars as Nick, a 29-year-old Italian-American who lives in Manhattan and makes a Sunday ritual of visiting both sets of grandparents in Jersey. His own parents have flown the Eastern seaboard for Florida, leaving him the sole recipient of his extended family’s love and lasagna. He narrates in the vein of “Can’t live with ’em, can’t live without ’em,” while the author attempts to create two grandpas and two grandmas from one patented idea.

On the maternal side are Frank (Richard Alan Nichols) and Aida (Ami Silvestre) Gianelli. He is on the verge of losing his driver’s license, having dented one too many fenders, and she is the perpetual nudge (yes, it’s Yiddish, but it’s better than my Italian), foisting food on everyone at every moment. Nick’s paternal grandparents are Nunzio (Duke Howze) and Emma (Joicie Appell), who are as loud as their clothing.

The quartet has advanced meddling to a fine art, which is put to the test with Nick’s announcement that he’s been offered a promotion that would relocate him to Seattle. “Not the close Washington, the one over there,” Nunzio says as the weight of the news sinks in. Act one’s first scene ends with a threat to undermine Nick’s career and keep him where he belongs.

Getting him married seems to be the first and last trick in the grandparents’ satchel, and they concoct a dinner that is their usual routine plus one: Caitlin O’Hare (Sarah Crawford), a nice Irish girl who’s on to their game. Nick, of course, is mortified but begins to succumb to Caitlin’s charms. Their scenes together are the finest of the evening, with Crawford in particular quite adept at zinging such lines as this retort to Nick’s request for a date: “What if I liked you and then you moved away? That would be too sick even for me.”

The ending of each act might surprise someone unfamiliar with cheese, despite DePietro’s attempt to make poignant what is predictable. Any of the writer’s decent lines, such as the joke about a “busload of 80-year-old Catholics,” are unfavorably matched with clunkers like, “Pass the salt … and a weapon.” Unlike Tony Soprano, this hero couldn’t load one much less brandish it.

You have to give the cast credit, because Nichols, Appell, Howze, and Benton are names that are hardly of Italian origin. If Silvestre is, it’s then ironic that her performance is by far the weakest; she’s much too brittle and badly wigged to rule this roost with anything more formidable than a slotted spoon. Through the cleanest bifocals, Benton doesn’t do too badly. He ably gets into Nick’s persona and looks somewhat Italian if you’re talking north of Florence. Appell and Howze get the lion’s share of the laughs, and this is, for Appell, a performance light years from her demonic Mag in last year’s Beauty Queen of Leenane.

Shane Rowze’s light cues consist of turning spotlights on and off whenever characters are made to break from the repartee and comment on the action. Gregg Benkovich’s costumes are an ordinary mix of cotton, khaki, and, for Appell, flowery polyester. But Keith Brumley’s set is well-designed and detailed beyond what would be necessary. There’s the grotto that holds a blue-robed Madonna and is surrounded by mulch, lace tablecloths, and doilies and, from my view, a basement window beneath the platform signifying the Gianelli’s dining room. It’s that basement window — never used, never mentioned — that elevates a utile set to an accomplished one. It shows that Brumley has integrity for design and respect for the fictional family that walks on it.

Both this show and I Love You, You’re Perfect, Now Change are still running among New York’s off-Broadway listings. I imagine they have resorted to tour groups and bridge-and-tunnel traffic by now, but you have to credit the American Heartland Theatre for pursuing the right to bring Kansas City a taste of that town’s theatrical kaleidoscope. They’re expanding DePietro’s bank account and saving Kansas Citians the airfare in the process.

Over the River and Through the Woods
through May 7

We The North becomes We The Midwest: Are we going to borrow the Toronto Raptors?