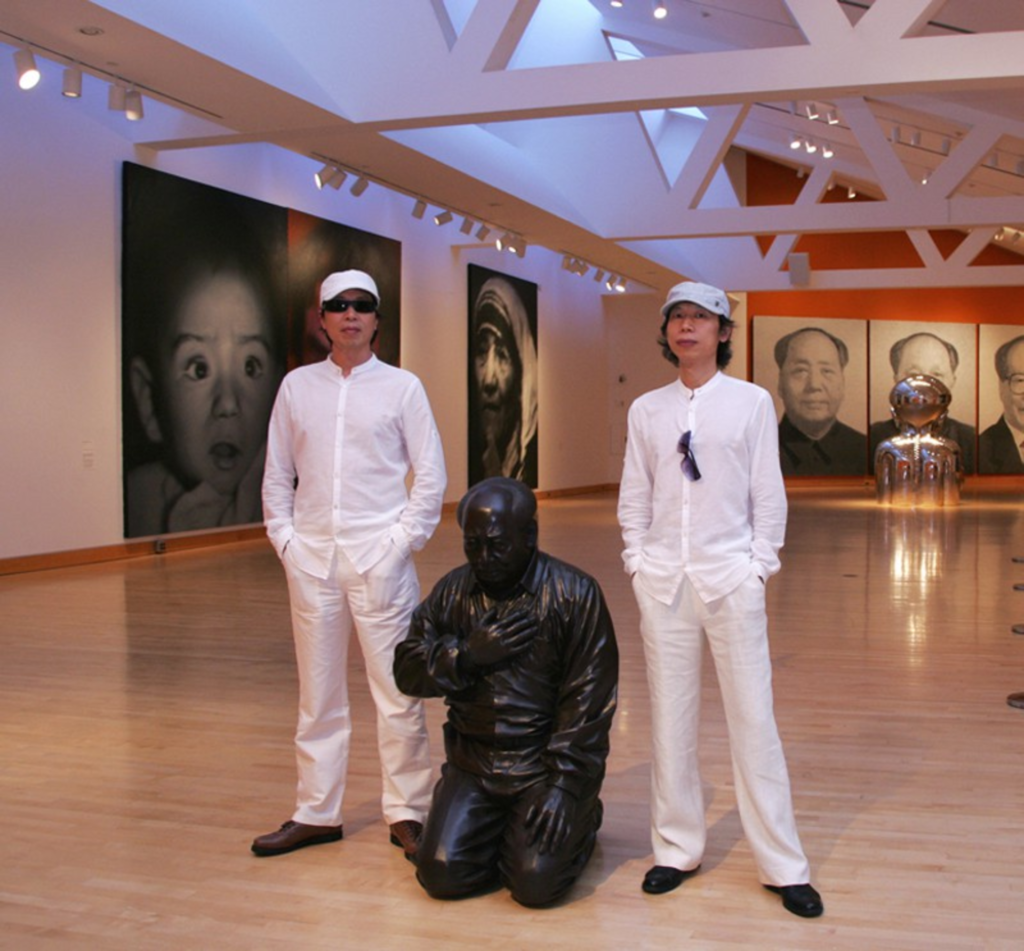 China’s political structure defies easy characterization. Termed variously socialist, communist and authoritarian, its metastatic brand of party-controlled capitalism challenges the Western equation of liberty with unfettered markets. Consider also that the brothers Gao Qiang and Gao Zhen lost their father in 1968 to a political party that labeled him a dissident. The People’s Republic of China reported to the family that he had died by his own hand one week after his internment in a re-education camp.

So politics are tragically personal to the Gao brothers, and if their art favors bluntness instead of a nuanced description of China’s political hybridization, it’s because they’re more interested in the party’s relationship with the individual — and by party, we’re talking about the People’s Republic of China and also that right for which, according to Michael “Mike D” Diamond, Adam “MCA” Yauch, and Adam “Ad-Rock” Horovitz, you gotta fight.

Here’s a 1995 photograph titled “Mass in Tiananmen Square,” depicting a youthful Gao Zhen, the very archetype of a rock-and-roll hero — longhaired, unshaven, a knee-length nylon duster flapping in the breeze. His smile is beatific. Zhen is flanked on both sides by passing law officers, his body positioned to perfectly eclipse the epic portrait of Mao that gazes down at the masses in a public space that still represents the totalitarian face of China.

Mao and his weird haircut are, to the Chinese people, a visual distillation and embodiment of the Communist Party of China — a logo, basically, like Sonny the Cuckoo or the Michelin Man. His absence from the photo only emphasizes the powerful gravity that he exerts on the Gao brothers’ work, his face an image that they exploit repeatedly. In “Mass in Tiananmen Square,” Zhen represents a generation that never experienced the 1949 triumph of the CPC and knew only its repression. The rigid lines of the police uniforms accentuate the Western channels of rebellion encoded in Zhen’s clothing and in his confrontational insouciance.

Speaking of that weird Mao haircut, the Gao brothers use it to address the political continuities and enforced uniformity of the CPC with a quartet of the monumental oil portraits produced for the exhibit. “Standard Hairstyle” depicts successive Chinese leaders Mao Zedong, Deng Xiaoping, Jiang Zemin and Hu Jintao, all sporting that same deeply unsexy coiffure. Offsetting any easy, superficial observation is the series’ daunting scale and the meticulousness with which the Gaos reproduce the effect of the rotogravure dots familiar from photographs in newspapers.

The artists aren’t always able to overcome the superficial. Other portraits here include Mother Teresa, the Dalai Lama and a diptych of Hitler portraits — one derived from photographs of the dictator as an infant, the other as the familiar, sputtering newsreel demagogue. This last work exemplifies the artists’ frequent failure to transcend the surface qualities of image. Not that they aren’t trying. The works are heroically scaled and carefully rendered, with techniques that emulate televisual scan lines or scalloped glass. But once Mao, Hitler, Che Guevara and a screaming Macaulay Culkin become iconic, they disappear into the ambient noise of the culture or else overwhelm anything nearby. Is the deployment of this imagery a shock in China, where no right to free expression prevails? The answer isn’t offered, and in this hemisphere, these figures have been fully absorbed into dorm-room posters and hipster T-shirts.

The Gao brothers’ sculptures, subjects of much of the press they’ve received in the United States, engage mainly with the interrogation of Chairman Mao and the party he represents. It’s impossible to avoid “Miss Mao Trying to Poise Herself at the Top of Lenin’s Head” on the lawn outside the Kemper, an enormous Jeff Koons-flavored chrome bust of Lenin on which a cartoony and feminized Mao balances with a tightrope walker’s pole. Inside, “The Execution of Christ” posits a whole firing squad of full-scale Mao Zedongs taking aim at a spindly Christ figure, an obvious visual metaphor that brings no new observations to the geopolitical discussion.

The Gao brothers finally do transcend the superficial, if not the blunt, with a sculpture of a repentant Mao, on his knees, hand over his heart, wearing an expression of remorse. The figure is surrounded by photographs of the Gao brothers’ family, including the father they lost.