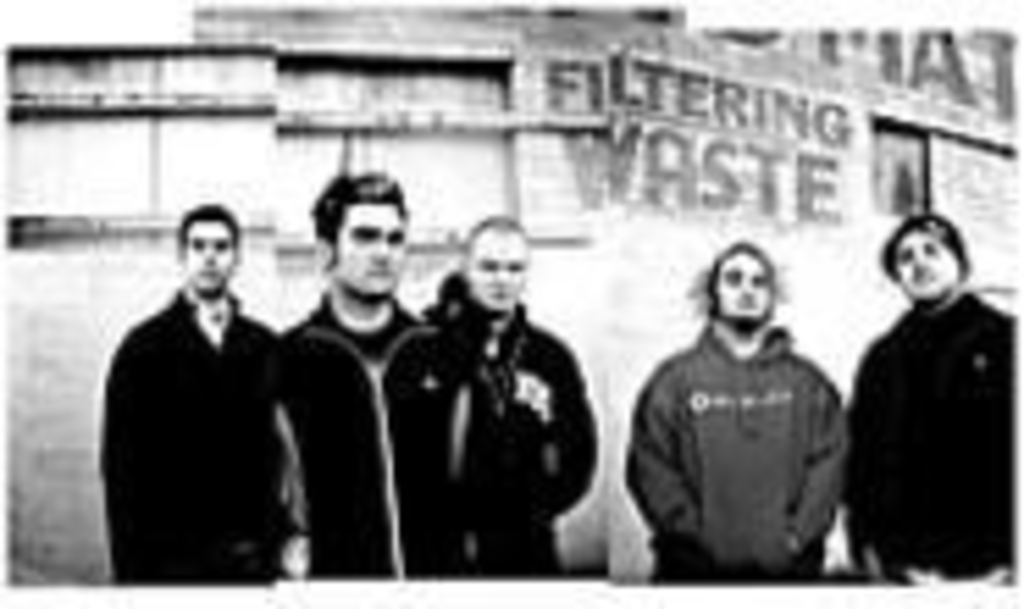 Chicago’s tacky tourist tar pit the House of Blues brims with teen spirit as the lights dim and New Found Glory takes the stage. There are 1,000 kids in the capacity crowd tonight, but a stadium-sized roar envelops the room as NFG launches into “Understatement,” a high-octane ditty from its third CD, Sticks and Stones. The main floor erupts into a mosh pit of pogoing teens and crowd surfers.

Onstage, the members of NFG are a study in commotion, sprinting back and forth and leaping into quick scissor kicks and two-legged side jumps. Guitarists Steve Klein and Chad Gilbert have perfected the art of kangarooing around as they blast out power chords, and bassist Ian Grushka, hefty, bald and goateed, is already shirtless and sweaty. But vocalist Jordan Pundik is the main attraction, and he aims to please — strutting, preening and doing the Ashlee Simpson Saturday Night Live hoedown for laughs. Pundik is part tattooed gelboy, part aerobics instructor and every inch a rock star.

“Thanks for coming out to the “Back to Basics” bullshit,” he says by way of welcome. Gilbert, who serves as Pundik’s comedic counterpart, adds, “We’re going to be playing a lot of crappy songs, so get ready to burn some calories.” The band tears into the opening strains of a love song called “This Disaster.”

It’s going to be a good night.

“When you go back to a small place and everybody knows every single word to every single song and you’re right in their face without barricades, nothing can beat that,” Klein, who enjoys the traveling life, told the Pitch in a March interview.

NFG’s latest tour, a 61-date behemoth called “Back to Basics,” keeps the band on the road through early summer. NFG has toured consistently since the spring 2004 release of its fourth effort, Catalyst. The gigs have run the gamut from high-profile festivals to short stints with credible indies and international dates with pals such as Yellowcard.

Last summer, NFG completed the entire Warped Tour, then touched down in Europe four days later to launch a worldwide trek with Green Day. This outing (which features openers Eisley and Reggie and the Full Effect) gives NFG the chance to blow off steam in smaller venues, where pressure is low and devotion is high. The tour skips fancy pyrotechnics and lighting displays in favor of a wall of amps and a massive banner that proudly displays NFG’s hometown of Coral Springs, Florida.

“This tour’s so fun. It’s been my favorite so far,” Klein said. “When you do small venues, there’s not 10 dressing rooms like you have on a big tour, so everybody’s hanging out, and we’re all going out to eat after the show. That’s the way it’s supposed to be, a big, traveling family circus. Even in the first few weeks, we already talk crap about each other and make fun of each other and have nicknames.”

Tonight’s show is all-ages — otherwise, the joint would be empty. The average attendee’s age looks to be about 15, and there’s a strong contingent of 8- and 9-year-olds who are straight out of central casting: White-belted girls in wife-beaters vie for space with skate punks, mall rats and baggy-shorts-wearing frat boys-to-be. Denim-jacketed stoners sporting Pantera wristbands rub up against mascara-drenched moppets with bangs in their eyes. One T-shirt proclaims: “Las Vegas is for Luvas,” and females outnumber males by a considerable margin — a trend we’d observed before and remarked upon to Klein.

“I don’t really know how to explain that,” Klein said. “I think maybe because we’ve got a cute singer or something. Maybe it’s the lyrics. It’s not a bad thing. They buy shirts and stuff. Girls buy merch. And merch is the only money that our band makes, ever. It’s pretty cool. You look in the crowd, and there’s the high school cheerleader, there’s the hardcore kid, there’s the punk-rock kid.”

“This next song was written about Jordan,” Gilbert jokes. “It’s called ‘Boy Crazy.'”

NFG’s songs all sound about the same, pleasantly hummable tunes with toe-tapping beats and choruses that are a bit too easy on the ears. Topics include first kisses, bad breakups and parents who just don’t understand.

Speaking of which, a black-clad James Dewees is positioned at stage left. The former Get Up Kid pounds away at a keyboard, sings backup, dances a bit — and generally tries not to look embarrassed to be here. NFG and the GUKs have the same booking agent, and the two bands have shared numerous stages over the years. During the Catalyst sessions, NFG tapped Dewees to play keys on a song, a collaboration that earned Dewees an invitation to join NFG on the Warped Tour and the Green Day outing. The unofficial sixth member of NFG appears poised to become a permanent fixture any day.

“He’s definitely a character,” Klein said. “He’s not an official member at this point. It hasn’t really gotten that far, because it hasn’t been that long of a relationship musically. But on this next record, we’re definitely going to have him come and write with us. We really like the vibe that he brings to the band. It’s like a whole new level, a whole new world.”

Near the end of NFG’s set, the group is joined by Christine Chase, a 15-year-old, fresh-faced blonde who’s been following the band since the tour stopped in New York City a couple of weeks ago. “She had a sign that said ‘Let Me Play!'” Gilbert explains to the audience. And NFG has done just that, offering Chase a guitar before ripping into “Head On Collision.” Chase hammers out rhythm chords and sings along with a look of pure joy. It’s a great moment, one that perfectly summarizes everything that kids love about NFG.

“While all the jocks were going to football games and keg parties, we were having shows and going to see bands,” Klein recalled. “And that’s what made me want to be in a band in the first place — being young and going to shows and being like, ‘I wanna do that.'”