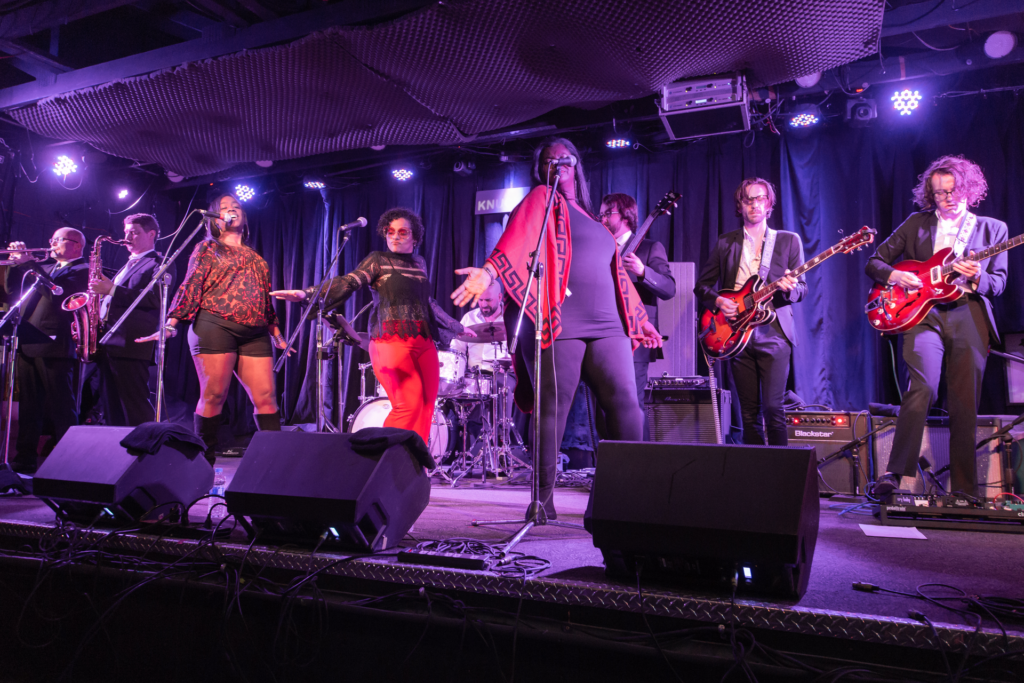 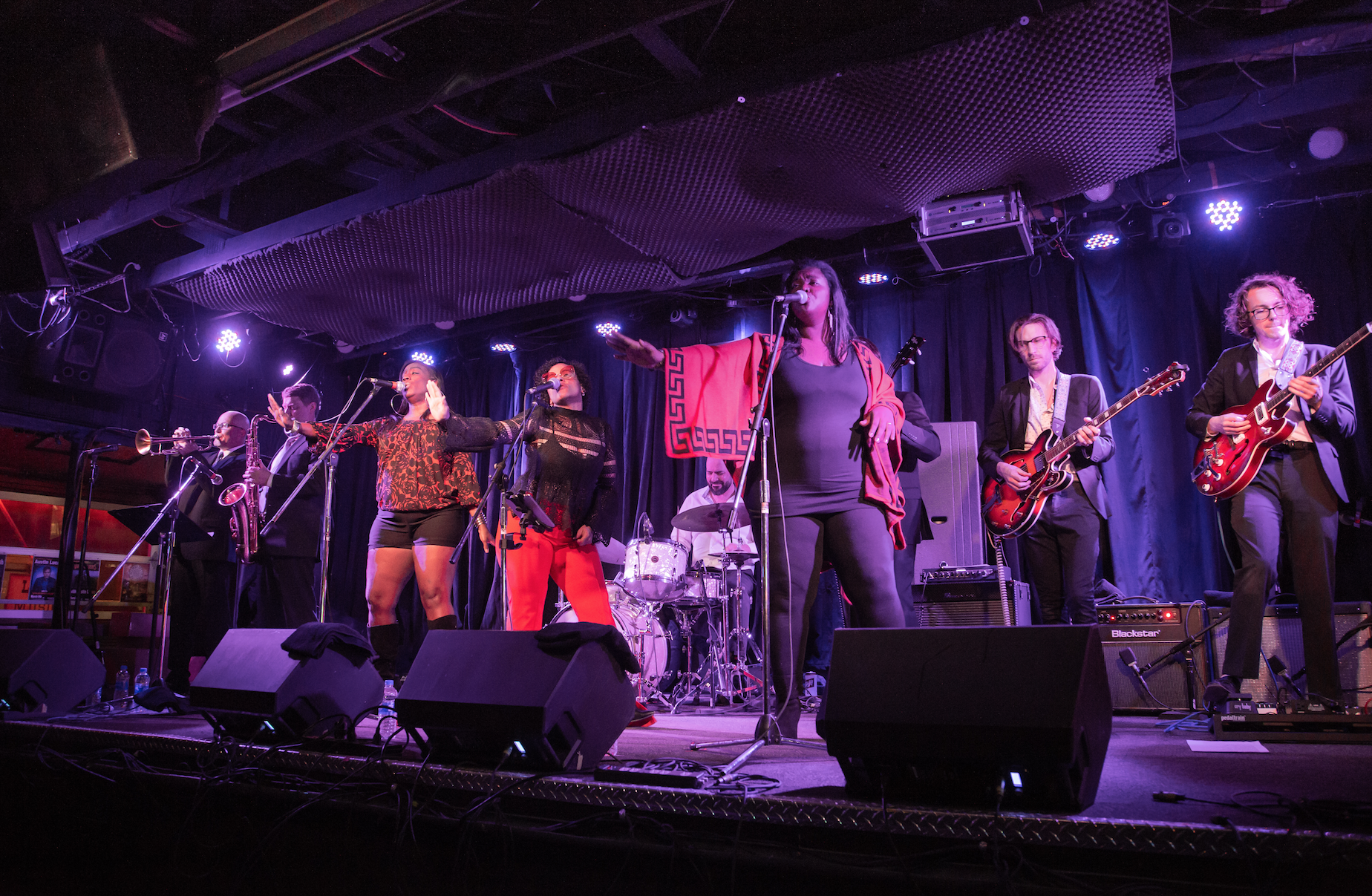 Six white guys in suit jackets take the stage at Knuckleheads on a Thursday in early March. They start in on an upbeat instrumental number with a deep, funk beat: bass, drums, guitars, then the horns. The bassist, Chris Hazelton, steps up to a microphone and announces that the performance we’re about to see offers “a message of love and togetherness.” Then he introduces what he calls the “stars of the show.”

Misha Roberts, Seyko Groves, and Paula Saunders — three fabulously charismatic black singers — arrive onstage, take their places in front of their respective microphones, and begin to slide together in a choreographed sway. Then, for the next hour or so, they burn up the joint.

This is the Freedom Affair’s first performance at Knuckleheads — a milestone of sorts. Usually, the band performs at the Ship, in the West Bottoms. That’s the site of its first gig, and it usually plays there at least once a month, typically on a Wednesday. The band began as an idea in the summer of 2017.  Drummer Dave Brick had just returned home to Kansas City after about 15 years in Oakland, where he played in a funk act called the Grease Traps. An old bandmate referred Brick to Hazelton, a stalwart of the KC jazz scene. Hazelton knew the Grease Traps, and the two started jamming together. That November, Hazelton (who also runs Sunflower Soul Records) invited a couple of guitarists — Cole Bales and Branden Moser — from Instant Karma!, a band he produced on his label, to join.

Then, one night at a Third Thursday gig at the Nelson-Atkins Museum of Art in January 2018, Hazelton heard Roberts and Saunders singing together with a different act, Diles Mavis. He gauged their interest in singing with this band he was starting up.

“They were like, ‘Yeah we’re on board,’” Hazelton recalls. “Misha was like, ‘Hey, what do you think about inviting my friend Seyko? She’s really great, and she writes really good tunes.’ I was like, ‘OK cool, yeah.’ It just, piece by piece, kind of came together.”

Coming in as an out-of-towner, Brick was surprised by how quickly the band formed.

“I remember expressing the idea of, ‘Hey, it would be great to get three singers for various reasons — creatively, and also logistically,’” he says, laughing at how uncomplicated it was to turn that ambition into a reality. (Trumpeter Pete Carroll and saxophonist Brett Jackson later rounded out the group.)

Perhaps not surprisingly, given the identity dynamics in the band — six white dudes, three black women — the songs that the Freedom Affair ended up creating are inherently political, though not in the polarizing way of today’s dominant media outlets. Instead, like the soul music on which they are built, Freedom Affair’s songs often speak to personal empowerment. There’s “You Can’t Keep a Good Woman Down,” which is about exactly what it sounds like. Or “Rise Up,” which was recently included on Loveland, Ohio’s Colemine Records’s Soul Slabs Vol. 2, and which calls for hope: Let’s move toward a brighter day, together we can find a better way. Rise up!

“We all write about what we feel,” Hazelton says. “Things that’s on everybody’s mind, like, Man, how’re we going to make it through some of this crap that’s going on? And you know we all have to exist on this rock together, so we may as well make some things better.”

The harmony extends to the musical dynamics in the band. There’s no lead singer, and there’s no backup singers. All three women are lead singers, and they alternate from song to song.

“It happens organically,” Saunders says. “We were looking at a song recently and as we were talking through, Seyko was like, ‘I hear you on this,’ and I [said], ‘I definitely hear Misha.’ We work together like that. We think about each other when we think about how the song should sound.”

Although each member still continues to perform in different, local bands — Boogaloo 7, Project H, and Funk Syndicate, to name a few — the goal is to eventually take the Freedom Affair on tour. Meanwhile, the shows at the Ship keep drawing bigger crowds.

“People are coming [to The Ship] intentionally to hear us,” Brick says. “It’s not too big a room, so it can feel crowded quickly, which I think is good for us while we’re a young group. But it’s having that intentionality about people coming specifically for this show — rather than hoping for street traffic or something like that — is a good thing for us, because we’re getting an engaged audience. We’re getting people who are stoked about it.”

The Freedom Affair will be at the Ship on Wednesday, April 17, and at RecordBar on Saturday, May 4.