The Entrance Band could be a psych-rock dream 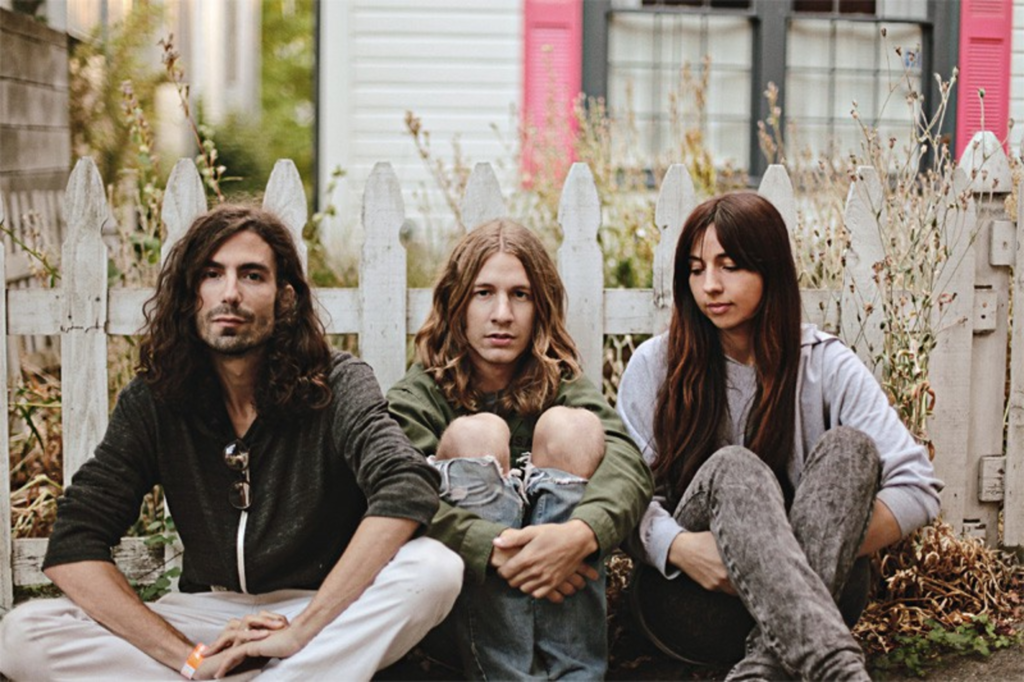 Keeping Guy Blakeslee on point is like gripping a balloon in a whirlpool. You just have to let the curly-locked Adonis go.

“I could get really new-age, but I’ll try to keep it in the music realm,” Blakeslee says by phone from California. The attempt is in shambles 20 minutes later when the Entrance Band‘s 28-year-old singer and guitarist wraps up a wandering speech on how 16-year-olds who choose “psychedelic” as their MySpace genre are light-years ahead of past generations. He goes on. About how the word — connected to drugs, not connected to drugs — is spreading dramatically out there in the world. About how on the wings of music, or not, psychedelia will soon help tear down all worldly illusions. About how it will make humans finally see that they’re all one.

“Like shamanism,” Blakeslee concludes, “psychedelia is a cultural trend that has its pitfalls, but I think it’s impactful on the way people think. I could go on forever on that.”

We would hardly call shamanism a massive cultural trend in 2010. Spirit-summoning tribal mystics, though revered by the ’60s counterculture, aren’t exactly foremost on everyone’s mind. But psychedelic sounds do have a foothold in indie rock. Animal Collective (whose members Blakeslee went to high school with in Baltimore) is famous for spicing up trippy electronic dance music with group harmonies, noise rock and African drumming. The Entrance Band’s take on psychedelia, however, is of the more traditional type.

The Entrace Band, made up of Blakeslee on vocals and guitar, Paz Lenchantin on bass, and Derek James on drums, channels the hard-rock power trios of yore with its own twist. A mighty and rare concoction of hardcore and hippie, the band can pulverize your innards while it preaches unity and self-transformation. Blakeslee, a lefty, plays his right-handed ax upside down and sings in an androgynous warble; Lenchantin (a former member of A Perfect Circle and Zwan) goes heavy on the low end; and James is a wild child on the drum kit. Thurston Moore released the band’s debut album on his Ecstatic Peace label in 2009 and catapulted the band into the public eye by taking it on tour with Sonic Youth.

Formerly known as Entrance, the band began as Blakeslee’s solo project. Now it’s entering its own new age. After spending his formative years playing in bands in Baltimore’s hardcore scene, Blakeslee moved to Chicago in the early ’00s, where he started reinterpreting pre-World War II country blues. Ever the exploratory soul, Blakeslee dubbed himself Entrance in order to bring himself, he says, “into a trance and invite people to come along.” His LP Wandering Stranger shuffled into the spotlight in 2004, thanks to Devendra Banhart, who talked Blakeslee up in interviews and included him on the freak-folk-defining compilation Golden Apples of the Sun, which placed Blakeslee among then unknowns Joanna Newsom and Antony.

Blakeslee burned out on being a neo-bluesman. He formed the Entrance Band in part for musical camaraderie and in part simply to make his audience move.

“I found it hard to do anything by myself except put people in sort of like a dopey, spaced-out trance,” he says. As a solo artist, he explains, “You can’t really get people on their feet — as much as I tried to stomp on a tambourine or a kick drum, it was not a danceable experience.”

The Entrance Band isn’t a perfect album. Unlike past Entrance releases, there’s no strong conceptual thread running through the record, and Blakeslee’s rampant guitar soloing isn’t dynamic enough to warrant the excessive noodling on the second half of the disc. But it’s the sound of a band finding its feet. The group is heavier than a jam band and more gender-aware than your average dude-centric hard-rock act.

“Feminine energy needs to be a part of music,” Blakeslee says. “Nirvana was considered a hard-rock band, and they would play in dresses and make out on national TV. It really inspired me to find that you could play rock and roll and not have it be macho garbage.”

That balance of energy works well on the album’s standout track “Lookout!” The song takes a room-spinning stab at the darkness. But instead of turning it into a Sabbath-like horror film, the propulsive trio fights for the light. The lyrics, like a lot of Blakeslee’s, are aimed at freeing people from their dingy mental prisons: You’re waiting for the Kingdom to come/Waiting in vain/Lay down your gun/The kingdom is inside of everyone.

“MLK,” a tune on the album paying homage to Martin Luther King Jr.’s people-powered legacy, has polarized fans and critics. Pitchfork, which brutalized the album with a 2.2 rating, complained that the song has “all the gravity of a grade-school book report.” But with the song’s simplistic lyrics comes an irony-shredding honesty. Blakeslee’s hits (and misses) involve the kind of introspection preferred by those who’d rather hear a report back from the outer reaches of the mind than listen to Vampire Weekend sing about what’s up on Cape Cod.

“I don’t really want to dis Pitchfork,” Blakeslee says. “Because I understand that in this age, there needs to be someone that is cynical. There has to be a healthy balance between the people who are going to say that’s cheesy or that’s corny and people like me, who completely override that kind of thinking. I put out what I believe.”

The Entrance Band’s free-floating sincerity may not be for everyone. But it’s hard not to admire a band that can trip your face off.