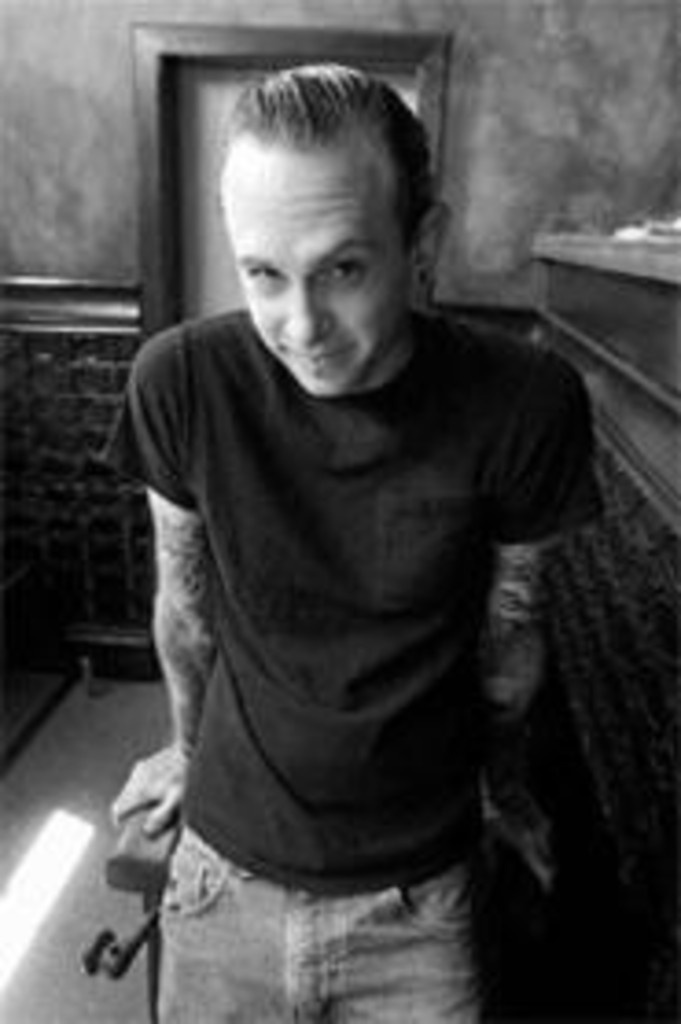 Other People are the cause of all problems. Slow, stupid traffic would not be an issue if I were the only driver on the road. If nobody else were around, I would never have to hear the phrases “That’s hot!” or “My bad.” And tattoo artists? In the absence of Other People, they would ink whatever the hell they wanted. The problem though, is that they’d have no material to work with.

Renée Laferriere has tried — oh, how she’s tried — to approximate a living, breathing human for her work. Pigskin is so similar to human skin, on a molecular level, that it can be used for grafting without rejection from a human recipient. So Laferriere figured that tattooing pigskin would be more or less the same as tattooing a person, only without the messy negotiation. Pigs: Like people, only less opinionated.

Laferriere decided to get out of tattooing because she ultimately wanted to be a fine artist and she didn’t think it was right to permanently mark people’s skin if that was not her highest aspiration. So she opted to leave tattoo art to those who truly embrace it as their genre of choice rather than just the thing that pays the bills while the real art sits at home in a pile of unmolded clay or on the surface of an uncut roll of fabric. Instead, she created garments out of pigskin and tattooed those using nobody’s vision but her own.

What she discovered was that, although pigskin and human skin have a lot in common, dead skin and living skin are nothing alike. “Living skin is healing even as you’re tattooing it,” she explains. When the needle creates a line on human skin, the healing process is what holds the line in place. But Laferriere found that creating a nice, clean line on dead skin was tricky — the ink would bleed out from the point of contact almost uncontrollably. And though she developed tricks to keep the lines in place, she has come to accept that, thanks to coverups and surgical procedures, you can take the tattoo out of the human being, but you can’t take the human being out of the tattoo.

True, a canvas will never want to be painted for all the wrong reasons. It won’t squirm under the brush or yelp while being painted, nor will it fail to understand that what it wants is just not possible. It won’t want you to replicate another artist’s work. And a canvas will never, ever, demand a dolphin on its ankle or a Japanese character on its shoulder blade.

But here’s the thing. If you get a tattoo, you want to be in control. With art that’s going to become a part of you, it’s fair and reasonable to insist that it be exactly how you envision it. But then, there’s this Other Person who actually knows more about the process than you do, and you have to trust this person — this artist — who knows how well an image will transfer from paper to skin, how well it will stand the test of time and how it won’t stand the related test of changing, aging skin.

Being a part of this moment in other people’s lives has a lot to do with why Chet Duvenci loves his work. Duvenci is opening his own tattoo shop, the Mercy Seat, in the Crossroads. To do that, he’s had to prevail over norms that would keep tattoo parlors in bar districts, next to adult video stores. Initially, he hoped to find a space in the River Market area, even billing himself as a “dermagraphic illustrator” rather than a tattoo artist. But Duvenci, wearing his business suit and packing his business plan, was consistently turned away, regarded as a nuisance. He’d all but given up before he found his gallery and tattoo-parlor space in the Crossroads.

Having gone out of his way to establish his business in an arts district and to create an image of artistic legitimacy instead of drunken sailordom, Duvenci clearly understands the human being as a canvas.

“I’m not into telling people what to do, because I don’t respond well to being told what to do,” Duvenci says. “Ego has no place in this business. When I’m initially starting to tattoo a person, I like to sit down with them and figure out where they’re coming from.” For example, there’s a band called Rudimentary Peni. Apparently, the artist who designs the band’s logo and album covers and posters creates work that really speaks to a lot of young punks — and is also way too detailed to become a good, long-lasting tattoo without a few changes. Duvenci tells them, “It’s, like, OK, this thing that’s the size of a tennis ball? We gotta blow it up to be the size of your back. This isn’t a 1950s, slap-it-on-your-arm kind of deal.

“More often than not, I end up developing a relationship with my clients,” he continues. “It goes back to that old tribal concept of friends tattooing each other.” On those rare occasions when he doesn’t think he can, in good conscience and with self-respect, give people what they want, Duvenci shows them to the door without touching their skin. This is a simple act of courtesy. “You don’t want to be an asshole to these people,” he explains. “You’re marking them forever.” So when someone wants a white-power tattoo? “I just gotta pass on that shit.”

A tattoo is always a collaboration between the tattooer and the tattooed, down to the care instructions. Duvenci recalls a friend who wanted a Popeye-anchor tattoo. He wanted it to look faded and weathered from the get-go. He didn’t want the brand-new-clean-white-tennis-shoes syndrome. “Usually you tell people not to pick the scabs, just leave it alone. His care instructions were: Pick the scabs; rub in the dirt,” Duvenci says.

One of the greatest challenges for artists learning to create work that adorns human beings is finding guinea pigs. Duvenci recalls telling his mentor that he’d heard about people practicing on oranges and on chicken breasts. “He looked at me plain as day and said, ‘Are you going to be tattooing oranges or chickens for a living?’ I said no, and he said, ‘Get your friends in here.'”

The people who sat for Duvenci, who trusted him even before they should have, will never pay for a tattoo. Tattooing being a rite of passage, the training process for tattoo artists is itself ritualistic. An apprentice becomes a tattoo artist when the mentor, as a sign of confidence in the young buck’s ability, gets a tattoo from said apprentice.

Tattoos can be surgically removed — which Laferriere knows from personal experience — and they can be covered up. Tattoo coverup has become its own art. I’ve seen a friend’s Wonder Woman tattoo transform, unbelievably, into a brick wall with a black cat peering through a busted-out hole. Some tattoo artists will even have old tattoos lightened just to clear up real estate on their already-covered bodies, making room for an admired colleague to do some work.

Duvenci won’t have any of his tattoos covered up. He sees them as a road map. He started getting tattoos when he was a young, manic kid, treating the process as an almost yogic experience. “Endorphins kick in, and you just sort of zone out. When I was getting tattooed, I knew I couldn’t move. I just had to sit still and keep my breathing even.”

Older, less manic, more tattooed and very businesslike when he wants to be, Duvenci opens Mercy Seat to the public on Friday, May 13, at 210 East 16th Street. Renee Laferriere’s tattooed-pigskin tutus will hang in the lobby, hauntingly original reminders that pork is, in fact, the other white meat, that tattoos are real art, and that it wouldn’t be the same art without the crucial material: living, human skin.