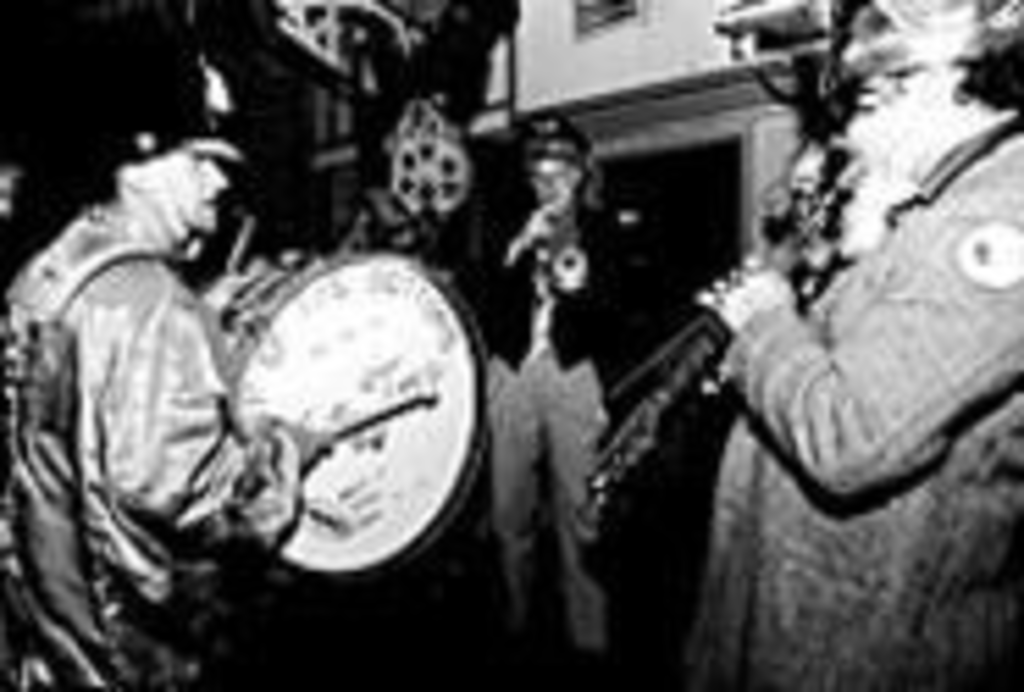 Back in high school, I was one of those kids who ditched prom. Having gone as a sophomore, I wasn’t fooled by the hype. At 17, I already knew that prom was Not My Thing. So why, oh why, did I go to the Grandview High School prom just last weekend, with my 28th birthday right around the corner?

Fuck if I know.

But at about 10 p.m. on Saturday, April 2, I found myself on a darkened downtown sidewalk, where 12 masked members of the Top of the Bottoms Social Aide Pleasure Society’s Dirty Force Brass Knuckle Street Band and Soul Revue — better known simply as Dirty Force — emerged from cars one by one, wielding trombones and trumpets, drums and sousaphones. This New Orleans-style vigilante brass band known for crashing parties, storming live music gigs and generally going ape shit around town was preparing to crash a Mardi Gras-themed prom at Kauffman Stadium. I was going with them, and I was excited. Being expected to go to prom in high school is one thing. Crashing a prom on the eve of your 10-year reunion is quite another.

Bobby DuSoul briefed me, as he briefs all first-timers, that if we were arrested, I was to adhere to the band’s rule of thumb: “Just stay tight and march straight into the paddy wagon.” Outfitted — courtesy of the band — with beads, a feather headdress, a bent plastic sword and a percussion instrument known as a wheelophone, I took several swigs from a passing whiskey bottle to stanch myself for my first trespassing experience not to involve a swimming pool.

Dirty Force was formed at the turn of the century — i.e., five years ago. A handful of Kansas Citians, including DuSoul and Josh Mobley, had just returned from a trip to New Orleans, where they encountered pleasure clubs aplenty. Inspired, they started the Top of the Bottoms Social Aide Pleasure Society and began throwing legendary parties. But the parties felt exclusive, and the instigators understood that Kansas City didn’t gain anything by a handful of hipsters hosting private parties, however awesome they might have been. So as part of its outreach program, the crew started a marching band. Its first audience consisted of hookers and truckers on the streets of the West Bottoms.

Everyone in the newly formed crew went back to parents’ houses, searching attics and basements for old high school marching-band instruments. “I went to my mom’s house and dusted off the old flute,” Mobley recalls. (It should be noted, however, that in Dirty Force, Mobley plays not a flute but rather a big-ass drum with pornographic imagery affixed to one side, which vibrates with every beat.)

When not crashing proms and enclosed ATMs, the band can most often be found at high-profile live music gigs in town. If you ask them to play your show, unless it is a jazz funeral, they will not show up, because then, as they see it, they’d be part of the problem instead of part of the solution.

“The problem with live music right now is this idea that it’s an art and the audience should stand there and just observe it,” DuSoul says. “Dirty Force is a revival of the neighborhood band, where people just played music and entertained each other. You could say we’re a bunch of pricks who ruin people’s art. You could say we don’t have any respect for social norms. Or you could just say we’re the sexiest motherfuckers in town.”

The only legitimate gig these folks have had was at the funeral of local jazz hero Sonny Kenner. “That’s a New Orleans thing,” says DuSoul of the spirited jazz funeral. “Let the body loose, and then it’s a party.” The next funeral on the band’s agenda: a jazz funeral for jazz in Kansas City.

Meanwhile, back to crashing gigs: Getting past bouncers is not always the picnic it’s made out to be, but it turns out that confidence, numbers, momentum and fast talking can get a marching band through just about any door. To date, Dirty Force has stormed a Rex Hobart and the Misery Boys show at Davey’s, the much-hyped Cramps show at the Madrid (so far the toughest security nut to crack), the Pitch‘s own music awards show at the Uptown Theater, a show at the Pyro Room (back when that was a premier rock venue), and — of course — Ray’s Playpen. “We just power through,” DuSoul says. “You know, onward march.”

In the case of Grandview High School’s prom, the road to entry was paved by an inside source. Escorts wordlessly showed us the way, and we shared one hell of a loud elevator ride up to the dance. Once there, we tossed beads to confused-looking girls in gowns while playing “When the Saints Go Marching In.”

Teacher and parent chaperones laughed and looked stunned as this anonymous masquerading caravan of strange adults paraded through the dance, playing music for about 20 minutes. Half the kids looked distressed, bored or simply dazed. (I’m going to go out on a limb and say they probably looked like that long before we arrived.) The other half was totally into the DF’s music, dancing, shaking it and generally going along with the mayhem. A boy in a wheelchair did some impressive upper-body dancing and followed the band around, repeatedly asking its youngest member, Megan — lovely in her gold strapless gown and bright-red face paint — to pose for pictures with him.

When it came time to play “It Ain’t My Fault” — a raunchy tune that, because its lyrics are shouted more than sung, wouldn’t have been obviously offensive to someone who didn’t already know the song — three gorgeous African-American girls joined in, singing along loudly and enthusiastically, fists pumping.

We marched out again, barely fitting back into the elevator, Megan jumping out to pose for one last photo with her new friend. Outside, we stopped to jazz up the Ewing and Muriel Kauffman statue, giving Mr. K a strand of beads and a colorful mask. When the security vehicle drove up, we politely volunteered to leave immediately, though we did pause to gauge the viability of storming a Royals game. The security guard informed us that we could easily get in for a game … for $7 apiece. “Life always has a catch,” he said.