The cure for Bee-ing: Pain 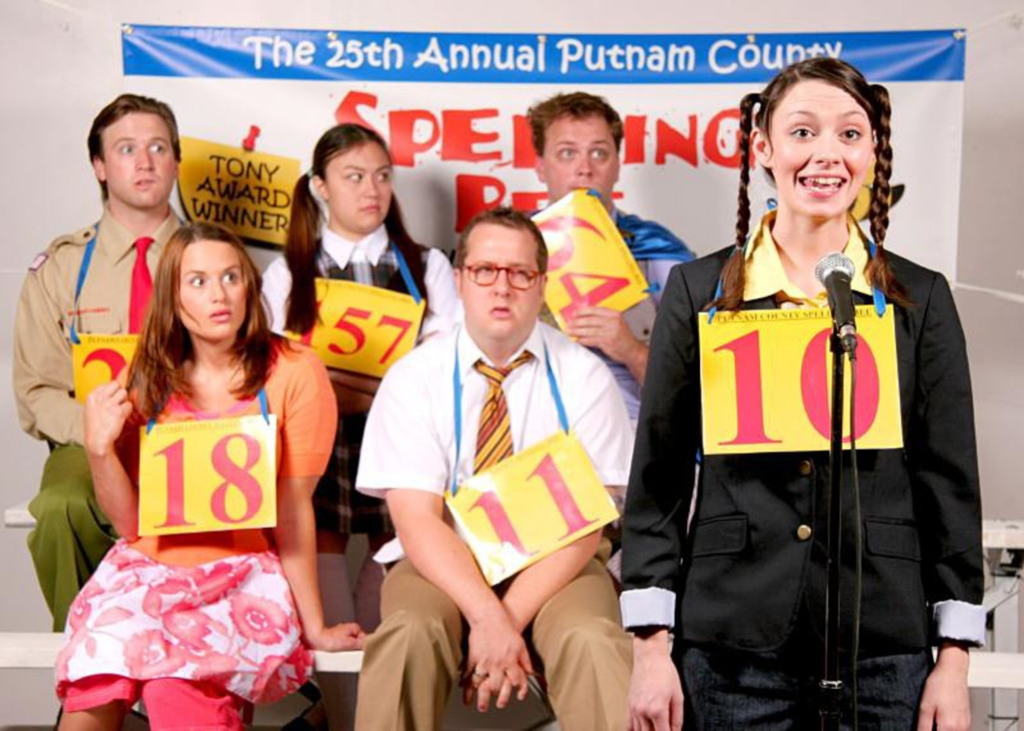 Not a month goes by that I don’t recall the girl who, during my elementary school’s spelling bee, marched up to the microphone and proclaimed with unshakable conviction that should was spelled S-H-O-O-D. The laughter that followed is the closest thing I’ve seen to the wrath of God unleashed. Years later, she got knocked up by the guy who drove the bus to vo-tech. Nobody will ever convince me that these events were unrelated.

The 25th Annual Putnam County Spelling Bee never dares humiliation this complete. Still, this clever goof of a musical glances against the hard truths of growing up wretched and friendless. One contestant suffers an unwanted boner; another daydreams that her parents have bothered to show up.

Portraying these afflicted children in the American Heartland Theatre production are restrained, convincing adults. Set free for once from playing a romantic lead, Lauren Braton is marvelous fun as Olive Ostrovska, a fidgety kid in love with her dictionary. In the second act, which is admirably darker than the first, she lavishes her considerable voice and technique on a song of raw loneliness that is the show’s highlight. Braton is matched by Michael Dragen as William Barfee, an unkempt tub of a kid beset by allergies, sinus problems and an imperial self-regard. Too often cast in forgettable second-banana roles, the nimble Dragen here makes each line not only comical — a phlegmy eruption from a troubled geek — but also entirely believable. Much of the rest of the cast is strong as well. (Also credible are the real people hauled onstage to play along as spelling-bee contestants.)

Spelling Bee attests to the power of the musical, even in its late and largely self-parodying period, a time when every song seems to recall an earlier and usually better show. It’s even hardworking enough to include a couple of dark numbers to please those who are too cynical for crowd-pleasers.

There are crowd-pleasers, and there’s Will Eno’s Thom Pain (Based on Nothing), the world-class crowd-baffler staged by the ambitious new Relevance Productions at Metropolitan Ensemble Theatre. A sort of existential stand-up act, Eno’s one-man show is either a put-on masquerading as urgent truth or urgent truth masquerading as a put-on — or both. It’s funny and terrifying in a way that’s specific to contemplation of humanity in the cosmos. “There’s a lot of zeroes out there,” marvels Thom Pain, our dapper Everyman, as he considers infinity. “What can one man do? Nothing, really. Or I don’t know. I’ve been taking vitamin supplements.”

That’s hardly the best line, but spoiling Eno’s better material would be cruel and stupid. The laughs come when you don’t expect them, and the truths hit when you’re braced for jokes. That uncertainty — the fear that neither this play nor anything else means anything — envelops Pain like the night pressing in on a candle.

Pain’s tale, delivered in comic fits and starts, concerns a childhood trauma, a failed romance and the first stirrings of puberty. Eno builds these universal experiences into painful specifics, but he continually dashes our expectations about each. His script is the rare contemporary play touched with something akin to brilliance.

Scott Cox stars as Thom Pain, and he in no way lets Eno’s words down. (He is directed by Trevor Belt.) He often interrupts himself for amusing distractions — a magic trick, a dirty joke, flirtation with an audience member. And his collective stage business unites vaudeville, Beckett and the halting language of our post-literate culture. Here, the playful audience interaction of Spelling Bee is hilariously, uncomfortably upended.

Cox’s voice is rich enough for audio books, and his movements are adeptly measured and executed. His nebbishy Pain demonstrates supreme confidence as he grins, rages and flatters to make you his confidant and his foil.

Thom Pain won raves off-Broadway in 2005. The New York Times called it a “small masterpiece.” Eno received a Guggenheim Fellowship and was an Edward F. Albee Foundation Fellow. Putnam County Spelling Bee also premiered in 2005. One has been through twice with a touring company and has now settled in for a lengthy run in a shopping mall. The other is mounted by a couple of guys in a garage. That’s the glory and the tragedy of Kansas City theater. Go.