The Coterie’s We Shall Not Be Moved: The Student Sit-ins of 1960 stands out 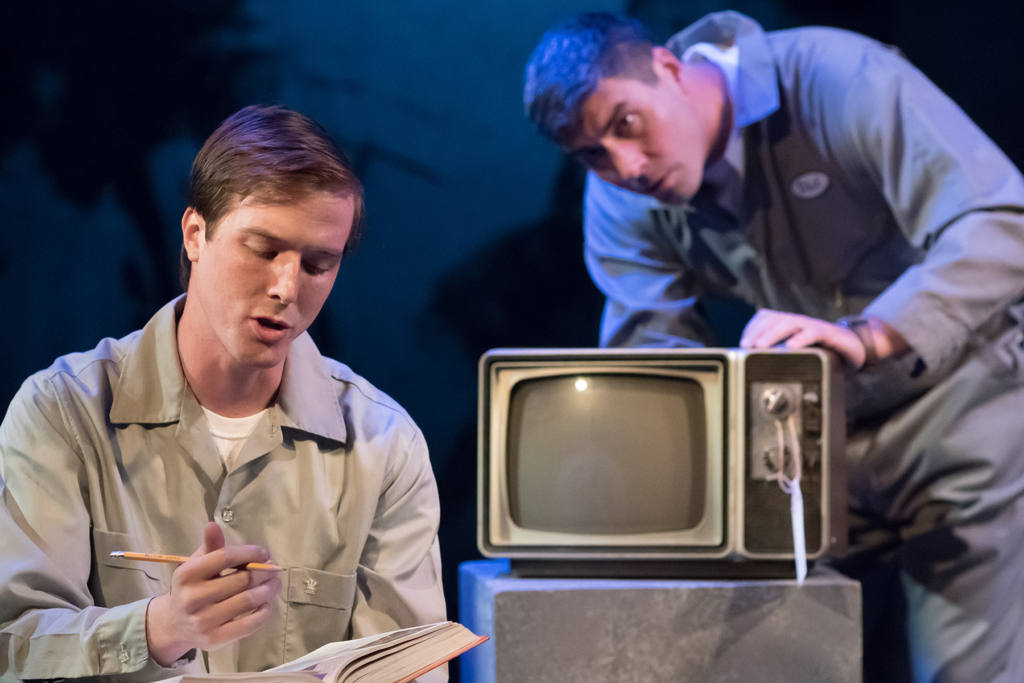 In February 1960, four black college students decided to sit at a Woolworth store’s whites-only lunch counter in Greensboro, North Carolina. Denied service and asked to leave, they remained in their chairs until the store closed for the night. Then they returned the next day. And the next. Soon, more students joined them, and angry white counter-protesters gathered around.

That this single but courageous act turned into a movement against segregation comes to vibrant historical life in We Shall Not Be Moved: The Student Sit-ins of 1960 at the Coterie Theatre, putting us in the midst of the action and intimately acquainting us with those involved. Director Jeff Church stages playwright Ed Simpson’s play — originally commissioned for the 2008 bicentennial of the city of Greensboro — with clarity, immediacy and sensitivity.

A spare set (by Rafeal Toribio) and 12 skillful actors, half of them portraying more than one role, tell Simpson’s crisp and clearly built story — geared toward middle-schoolers, teenagers and adults — which wraps the lives of both central and peripheral players around an action that continued for months, as more students joined the Woolworth’s sit-in and as the nonviolent protest spread to other cities in the South.

Like other educational works at the Coterie, it’s an interactive piece that induces audience members to truly think about what they’re seeing. The day I sat in on a performance, students eagerly contributed their thoughts and asked questions of the characters. 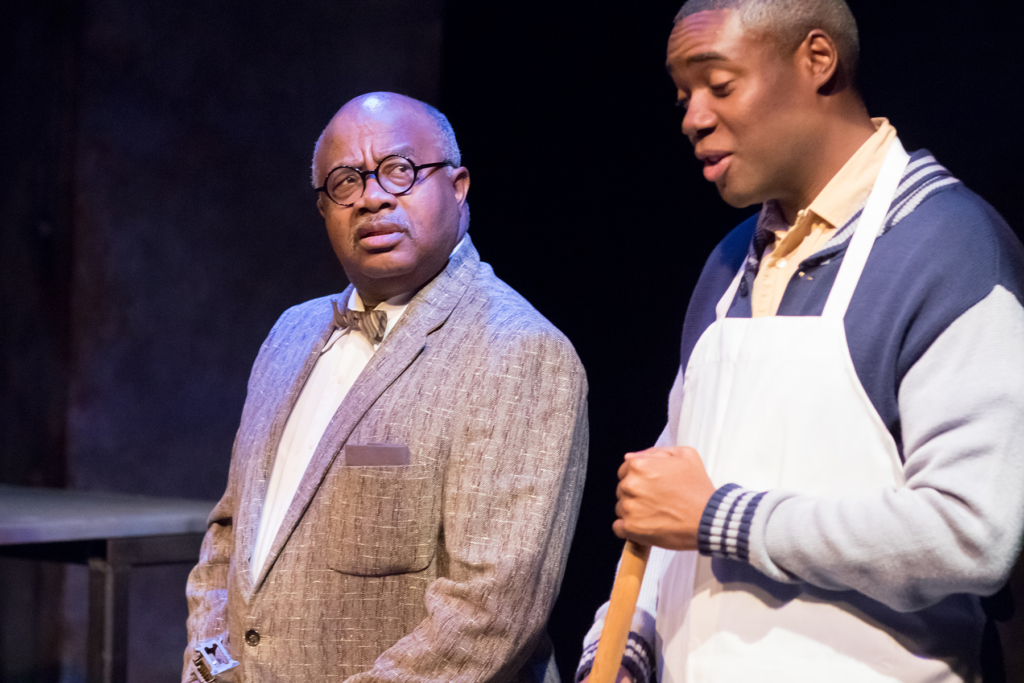 I, too, was caught up in the absorbing depiction of one of the key episodes of the civil rights era. Current controversies and issues around race relations sat at the back of my mind, just as they have during previous Coterie works related to this country’s race history — The Nine Who Dared: Courage in Little Rock, about 1950s school desegregation; And Justice for Some: The Freedom Trial of Anthony Burns, about issues of slavery in 1850s Boston.

We Shall Not Be Moved, the events of which took place 57 years ago, takes an up-close-and-personal approach to storytelling that diminishes the passage of time and narrows the gap between present and past. It feels neither distant nor calculated as it delves into the protest’s many aspects through the persons involved on the inside and those watching on the outside.

From the play’s outset, a Young Man (the engaging Darrington Clark), one of the four student protesters and also a narrator for the story, brings us up to date on the status of events. Woolworth’s will take his money at the retail counter but not at the lunch counter. He and his friends know the risks of challenging the status quo, and they’re understandably fearful for their safety. 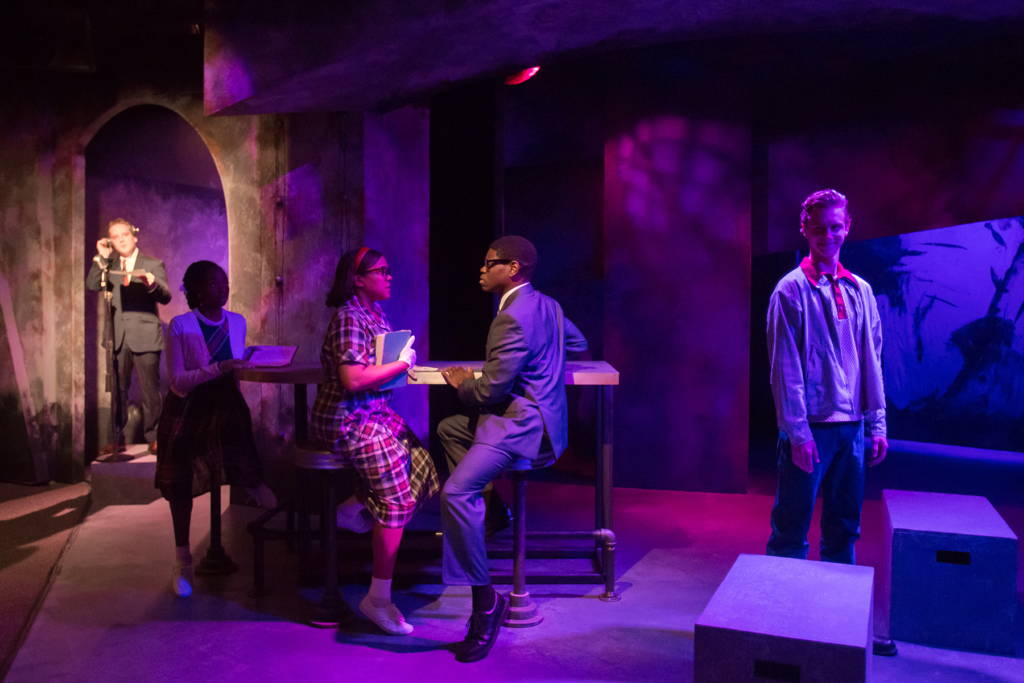 In a multifaceted approach, the play exposes the perspectives of both blacks and whites in the community, and none are one-note. A few of the standout performances and scenes: Red (Tommy Waller) tells us of being raised by a black housekeeper in his white neighborhood and how he first became aware of racial differences — how he learned about racism. A white female student (Alisa Lynn) must consider another point of view when she claims that the law supports the lunch-counter policy yet she smokes on a campus that doesn’t allow women to smoke. A black cook working the Woolworth’s lunch counter (Evan J. Lovelace) has a charged run-in with a white supremacist (Roan Ricker) on the sidewalk, and we experience the cook’s anger, humiliation and ultimate self-control. Eugene Conrad (Robert E. Coppage III) promises his dad, Nate (Granvile T. O’Neal), that he won’t protest but then must ultimately decide for himself. (And here, as Eugene’s friends set out for Woolworth’s, the action stops as the Young Man asks audience members to suggest what might be going on in Eugene’s mind.) And Phil Perkins (Matthew J. Williamson), the father of a student (Daniel Eugene Parman) who’s sympathetic to the sit-in, has reservations about the protest and disagreements with his son, but not for reasons we’d expect.

That dialogue between generations, between fathers and sons, adds thoughtful dimension to a timely historical lesson that continues to resonate today. The impactful and insightful We Shall Not Be Moved does, in fact, move us.

We Shall Not Be Moved: The Student Sit-ins of 1960