The Coterie at Night has great fun stepping in Scooby-Doo 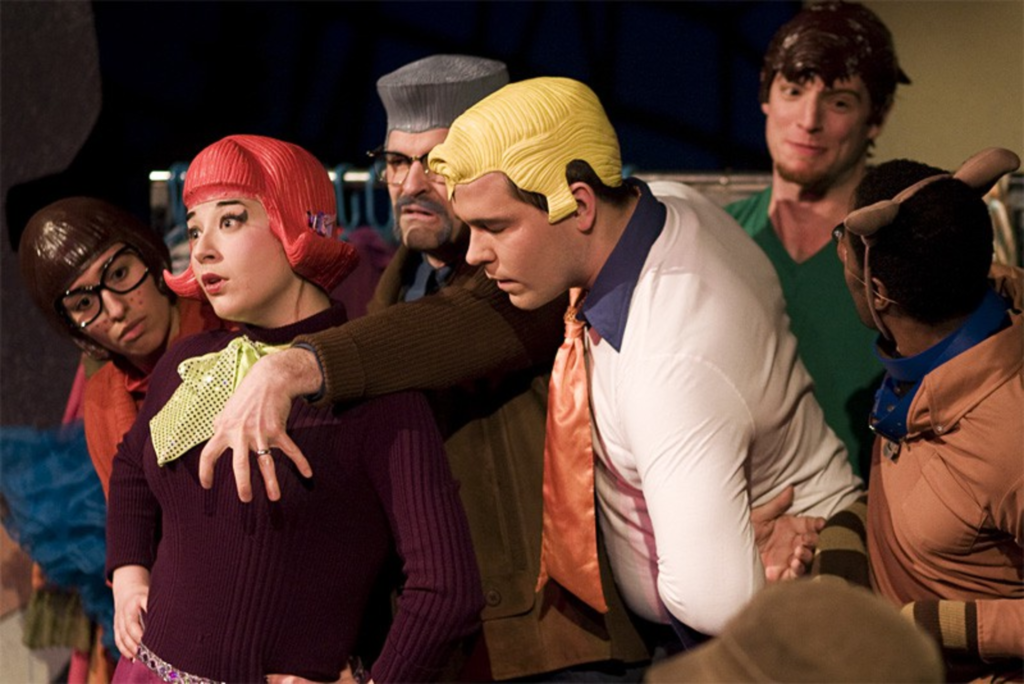 Spooky Dog, the Coterie at Night’s outlandish Scooby-Doo parody, is pure playground. That might sound like an insult, but I mean it as the highest praise. For 40 years now, fifth-grade Doo theorists have speculated on three key aspects of Mystery Machine lore: Who’s high, who’s gay, and why Fred always proposes sneaking off with Daphne. As its mystery-solving teens turn up clues on a county fairground, Spooky Dog wallows in those more important questions.

It doesn’t matter that the action is predictable. The result is like the best of playground chatter: free, silly and dirtier than adults might wish, this time acted out by the funniest kids in school. (Because it has a reputation to protect, the Coterie won’t admit children younger than 13 to this show.)

Ron Megee directs in what at first seems his established style, with sex jokes and pop-culture gags blasted at the audience like confetti from a canon. Shaggy and Scooby (here called “Scraggly” and “Spooky”) share blunts and bong hits; Thelma, standing in for the lonely, bespectacled Velma, is known for lubing up the handle of her flashlight. Monsters and panties make goofy appearances, and much ado is made of Spooky’s butt and Daphne’s — sorry, Tiffany‘s — bust, both comically padded. Once in a while, the story stops altogether so the gang can shake it to glorious late-’60s bubblegum pop.

That’s all fun, but it’s not what had me dissolving in laughter for most of the show’s 75 minutes. What did me in were two bits of inspiration beyond the realm of fifth-graders.

First, there’s Nicholas Gehlfuss as Scraggly, the lanky, ravenous ‘fraidy cat who, for some reason, bums around with mystery-solving buds who are forever putting him in danger. Rarely have actor and role fit so finely. Gehlfuss channels every screech and scratch of the original so well that you might think he’s lip-synching. There’s that pleased tickle in his throat as he prepares to bite into a 10-story hoagie; there’s that scrape of tender feeling when he tells Spooky Dog that they’re best friends. Better still is the blissed-out look that Gehlfuss maintains through most of the show. The cartoon Shaggy is not just flat but blank-faced; Gehlfuss’ Scraggly is animated even when he’s standing still, a stoner high not just on his dope but also on the joy of just being. I wish that everyone, at some time in our lives, could experience a happiness as complete as the one Gehlfuss radiates as he stares at a hot dog or at one of the great foam sandwiches whipped up by set designer Mary Nichols.

Even the most dumb-ass bits of nonsense work. For example, Scraggly asks Spooky (Bennett Ferguson, an excellent mimic) for a napkin; handing it to him isn’t Spooky but the phantom from whom they’ve been running, and it takes forever for Scraggly and Spooky to notice and haul ass offstage. That was never funny on TV. Here, acted out by gifted performers committed to the bit, it kills. Same goes for those times when, frightened, they take turns leaping tenderly into each other’s arms. My only complaint is that Scraggly and Spooky never slap the phantom into a barber’s chair and offer him a shave.

The second great inspiration is Megee’s dedication to cartoonishness. That doesn’t just mean slapstick and sound effects, both of which abound, or Jon Fulton Adams’ dead-on costumes, each of which is topped by a ridiculous plastic wig. No, Megee is after all that’s stiff and shitty about Scooby Doo, too, right down to the static poses and repeating group shots common to such cheap animation. When they get out of the Mystery Machine — here it’s called the Clue Caravan — they arrange themselves into a lunchbox-ready tableau. Then they stand still, even when speaking. In true Hanna-Barbera fashion, only their mouths move; in true Megee fashion, this is hilarious.

The performers revel in this play. They’re especially impressive in some moments of improvisation. Tyler Horn brings a genial cluelessness to Ted, the ascot-loving leader. Helen Gonzalez simmers with impotent sexual rage as Thelma, and Rachel Hirshorn elevates the Daphne role from redheaded eye candy to a memorable dingbat. Jessica Dressler and Martin Buchanan turn up as suspects and phantoms. Both clown their hearts out.

The phantom is some 8 feet tall, part costume and part puppet, a giant skeleton in a Slash-style top hat. On opening night, one of the skeletal arms hung limp, apparently out of order. The spirits that Megee and the Coterie have raised here are so high that such a malfunction just made things funnier.