The Coterie and the Unicorn consider America’s relationship to itself 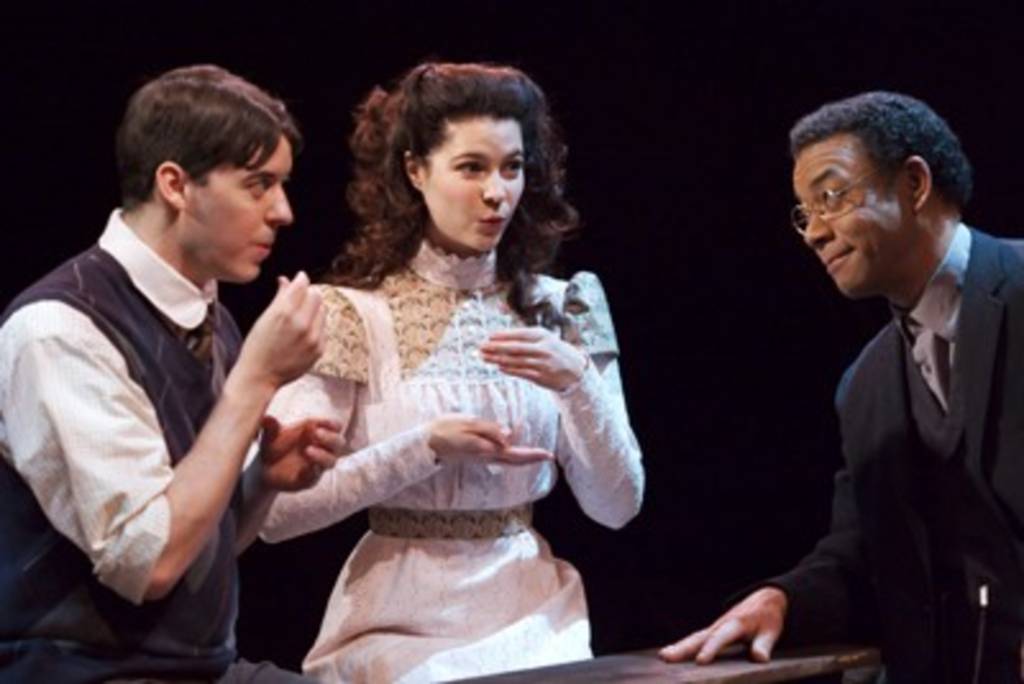 There are a number of reasons to catch the Coterie Theatre’s rich, inventive staging of that read-in-high-school classic Our Town, the second superior production of a canonical American play to shake up local audiences this month. Like the Kansas City Repertory Theatre’s extraordinary production of The Glass Menagerie (now extended through February 15), this Our Town leaves you, by the time the clapping is done, more aware than when you walked in of what’s worth seizing in life.

This is a mostly excellent production, a tender and funny evocation not just of the American past but of Americans’ relationship to time itself. It’s also an easy watch, studded with highlights. Not the least of these is Walter Coppage. He glides about as the Stage Manager, burnishing the ordinary lives he speaks of with that golden purr of his. My Lord, that voice: Top-shelf whiskey wishes it were that smooth and strong.

As has been the duty, the last 71 years, of every Our Town Stage Manager, Coppage spends the first act walking us through a day in the life of Grover’s Corners, New Hampshire, in 1901. He points out streets and notables, taking advantage of all the breakthroughs of modernist theater. He chalks some scenery on a wall or hauls in a professor to lecture on the town’s significance. Bending space and time for our edification, his Stage Manager is narrator, party host, moral center, institutional memory and — crucially — a celebrant of both the universal and the particular, as well as the relationship between them.

The performance space is bare, but the actors appear in striking period costumes: corsets, umbrellas and waistcoats, all courtesy of Kelly Kasper. Director Jeff Church has dispensed with a stage altogether, choosing instead to set the action on an island of floor space surrounded by the audience. The cast often ventures out into the crowd, resulting in some exciting moments when scenes transpire on all sides. This is most effective during the famous ladder sequence, when young Emily (Ashlee LaPine) and her neighbor George (Todd Carlton Lanker) eye each other from their bedroom windows. To my left, the drunken choir director (an amusing TJ Chasteen) led a choir practice; in front of me, the kids sulked on their ladders while Dr. Gibbs (Charles Fugate) sat thinking in the kitchen below them; to my right, a projection of a great silver moon lent these everyday occurrences a catch-in-your-throat beauty.

The performances tend toward the strong. The young lovers are played with an old-fashioned, lusty innocence that makes every interaction feel momentous. Fugate turns a scene of stern parenting into a marvel of wisdom and tenderness. Kelly Main is subtle but affecting as a wife who dreams just a little bigger than Grover’s Corners. Patrick DuLaney is typically memorable as a newspaper editor. With no sets to work with and a sprawling performance space, lighting designer Jessica Bertine must sculpt a world from the shadows. She does so admirably.

Our Town opens and closes with the glow of a single lantern. The Velvet Rut, a world premiere by James Still at the Unicorn Theatre, also wraps with lamplight. It’s an ending that has worked before, but it’s not an ending that caps this occasionally inspired experiment.

Jim Korinke stars as Mr. Smith, a high-school English teacher who is so shellshocked by a from-the-headlines American tragedy of nine years ago, he can’t bring himself to return to school. The show opens with him weeping while sitting on what took me way too long to realize was a church pew. (Why dump dead leaves on him if he’s inside?) He’s befriended by Virgil (the impressive Matthew Jayson Weiss), an idealized Boy Scout who hums “Moondance” and might be an angel.

They talk through the specifics of Mr. Smith’s troubles. Virgil hypes the Boy Scout code: cleanliness, honesty and all that. Eventually, Virgil talks Mr. Smith into going on a camping trip, where they connect further, howl with the coyotes, and shout and cower as the Unicorn’s technicians throw every light and sound effect at them that they can muster. Then, after some shouting, there is an ending, one that neatly matches up with a couple of earlier monologues.

Still’s script offers sparkling exchanges and free-floating anxiety, all set in one of those is it real? theatrical dream spaces — in this case, one that is as loose in its rules as Our Town is tight. Korinke and Weiss both slam-dunk a couple of terrific speeches. What actually happens is less persuasive. Director Joseph Price gets everything he can from his actors, and individual sequences tingle with an intelligent suspense. The acting, set, sound and lights are all distinguished — now, if only that lamp had more to illuminate.