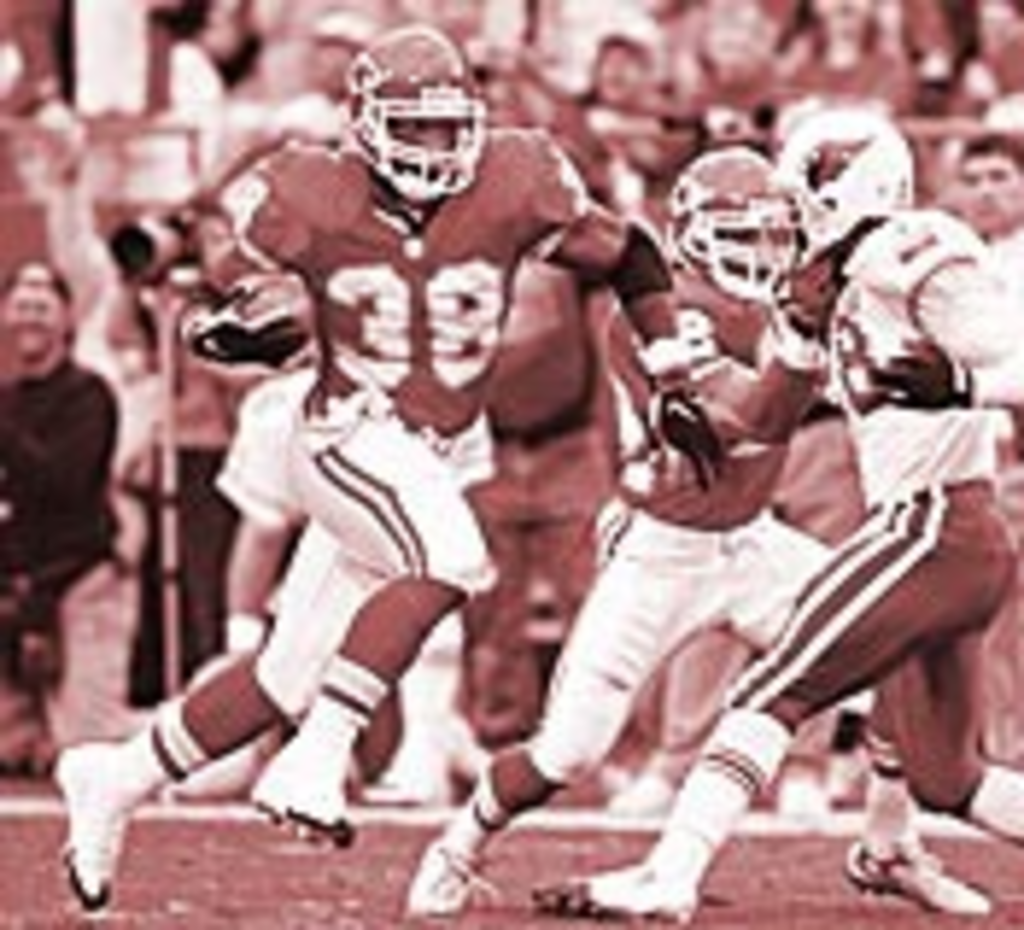 It’s a muggy Tuesday morning in River Falls, Wisconsin, where cheese, taxidermy, and the Chiefs (for a few weeks a year) rule the land. Thunderstorms dominate the early morning hours, but fortunately — or unfortunately, depending on your point of view — the downpour subsides in time for practice. The predawn rain pellets are replaced by choice colorful verbal pellets, many of which begin with the letter “F,” aimed by Chiefs coaches at certain players they hope to coax to new football heights.

One player who needs no coaxing is Chiefs running back Kimble Anders. The veteran running back surprised everyone by sticking with the team after signing as a free agent in 1991, turned his pass-receiving skills out of the backfield into several all-pro seasons, and now ranks behind only Tim Grunhard and Dave Szott on the Chiefs’ player seniority list. On top of that, in 1999, Anders finally found himself in what many people thought was his natural position — halfback rather than fullback. Anders responded by exploding for 142 yards in only 22 attempts against the Denver Broncos in the second game of the season, the most yards gained by a Chief in one game since 1991. Unfortunately, something else exploded in that game: Anders’ Achilles’ tendon ruptured, abruptly ending the halfback’s year and placing his NFL future in serious doubt.

But now Anders is back, and he hopes to do more than just contribute to the team.

“Actually, I feel a lot faster than before,” he says after a tough practice. “I feel better about myself now than I did this time last year. Even after the injury I feel 100 percent; nothing has come up yet, not even soreness. And last year I still had the mindset of a fullback. I’ve made the adjustment from being used to blocking to being used to getting hit.”

Anders credits a grueling off-season rehab program with putting him back in training camp instead of on crutches. “I worked so hard in the off-season that it’s just instinct now. Initially I was in a cast for three months; then I worked down in Texas with a boxing guy, bouncing on my toes for conditioning purposes. Then somebody suggested I get in this yoga class. It’s for real. We’d hold stretches 10, 20, 30 seconds in 100-degree heat.”

As if all that wasn’t enough fun, Anders spent some time in California, but he wasn’t there to cruise the Strip. “I went to the Sand Hills in California for three weeks. I ran up hills that were 200 yards long, pulling a guy behind me with a bungee cord. When I left Kansas City after the mini-camp in June I couldn’t do everything, but after California I felt real positive.”

Thanks to the rehab program, Anders feels confident doing “everything,” from hitting to cutting to blocking. Now he just has to convince everybody else. “In my mind I feel better than I did last year. This has made me a stronger person. When you have adversity, some people respond differently. I responded positively and worked harder. A lot of people don’t know what’s going through my mind. They have their own opinions. But if I believe in myself, I don’t have to worry about what other people believe.”

Last year Anders managed to gain more yards in a game than any Chief had in eight years, but skeptics point to Anders’ age (34 in September) and the severity of his injury in their pessimism about his continued success. But he’s done his time and paid his dues. With an untested Mike Cloud heading a crew of running backs that are at best competent, it only makes sense that the Chiefs give a shot to Anders, who seems to be the only back on the squad capable of breaking a long run. He deserves the chance.

Inside Pitches
With little fanfare, another Chiefs legend recently passed away. Among the accomplishments Tommy O’Boyle could list on his résumé: All-American player at Tulane, head coach at Southwest Missouri State and later at Tulane when it was in the Southeastern Conference, followed by days as assistant coach and talent scout for the Chiefs during the glory years with Hank Stram and Len Dawson, and, until just a couple of years ago, an employee of Blesto Scouting Service. O’Boyle, who was 82 at the time of his death, had a difficult time making his way to his seat at the far end of the top row of the Chiefs press box in part as a result of weak knees — souvenirs of turf wars in decades past — but he could still smell talent, or the lack of it, from miles away.

I was fortunate enough to sit by him through many contests, and O’Boyle correctly predicted when linemen had a future, accurately noting that such prospects as Keith Traylor, Vaughn Booker, and John Browning had potential. I asked him about first-round draft pick offensive lineman Trezelle Jenkins long before Jenkins gained a reputation as a classic draft bust. O’Boyle told me Jenkins would never make it because he would never master the footwork.

The O’Boyle press-box corner will look vacant now, even when the row is packed to overflowing. We miss you, Tommy.