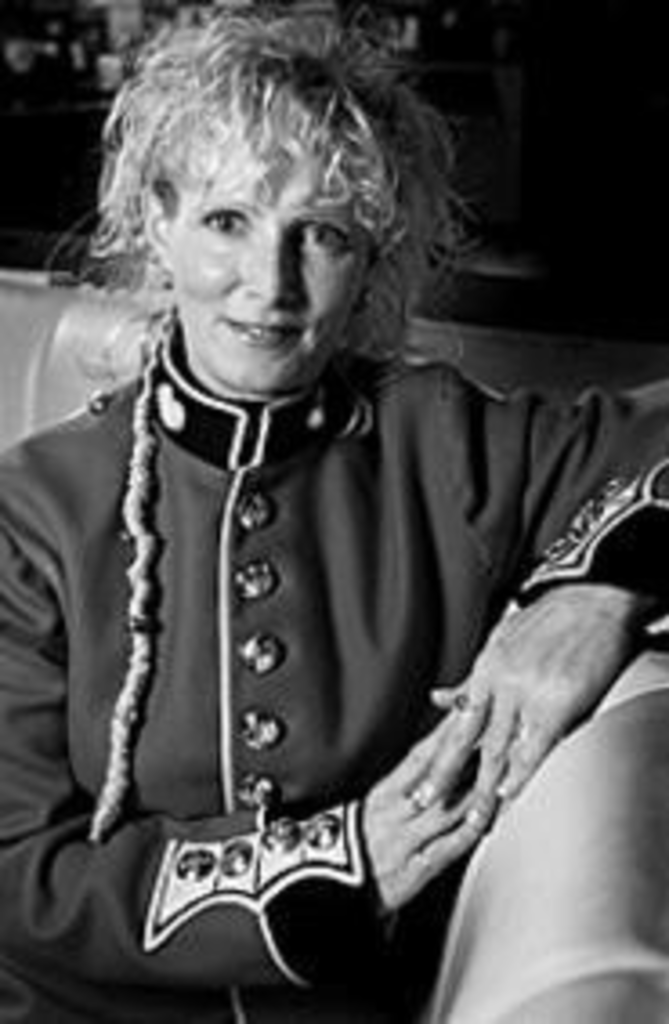 Jacki Penny is dressed for battle. Or for a mug shot.

It’s just after 9:30 on a Thursday night, and Penny, 42, stands at the farthest edge of her parking lot, aiming a black, clunky device at a building about 180 feet away. She’s not a law-enforcement officer, but she expects one to arrive any minute.

Penny manages the Bunker, a boxy, one-story hideout off Highway 40 in Independence for fans of local rock, metal, hardcore, punk and (sometimes) hip-hop music. It’s an 18-and-over club with a strict no-underage-drinking policy and a reputation for loud music. Musicians who perform there, like Walt Powell, the 27-year-old bassist for the punk band Delorean (the first band to take the stage this Thursday night), say it has the metro’s best sound system.

And because of that, Penny knows her way around a squad car.

She’s been hauled off the Bunker’s property in handcuffs twice, once for “maintaining a nuisance property” and once for allegedly interfering with a police officer responding to a noise complaint. On September 17, after the Bunker’s owners and managers appeared at a hearing before Terry Hartwig, the liquor license officer for the city of Independence, Hartwig revoked the Bunker’s liquor license. Days later it was returned, after a judge granted a restraining order against the city on behalf of the bar’s owners.

David Rauzi owns the bar with his brother, Jimmy. The place’s full name is Big Bob’s Country Bunker, named for the dive where Jake and Elwood play in The Blues Brothers. Rauzi, a lawyer with an office in downtown Kansas City, was helping his client, barbecue baron Ollie Gates, evict the previous owners when he and his brother decided it would be fun to run a bar. It was a country-music venue when the Rauzis took over in June 2000, but they later changed the format to rock.

All was swell, David Rauzi says, until August 2003, when he received a letter from Independence police officer Harold Echols, who declared the Bunker a “nuisance property.” According to city code, numerous violations at a property can earn it a “nuisance” designation; if the condition isn’t fixed after a certain period, the city can condemn the property or revoke the owners’ occupational license. But Rauzi says he had never received a citation before he got Echols’ letter.

Rauzi says he called Echols and told him, “We’ll try to get along with you. What do I need to do?” He says Echols advised him that he needed to avoid being the cause of further anonymous noise complaints called in to the Independence Police Department. That didn’t seem fair to Rauzi, who felt the problem was hard to address without knowing who was complaining. Rauzi says Echols told him that was his problem.

“He’s been very upfront about his concept of shutting us down,” Rauzi says of Echols. “He has said that it is personal, that he wants to personally see to it that we are run out of business.”

This past spring, one of the Bunker’s neighbors on Blue Ridge Boulevard signed a disturbing-the-peace complaint against the Bunker. Another neighbor says, “We don’t want it to close down. We want it to relocate to a nonresidential area. We’re not trying to be vindictive.” The neighbor asks to remain anonymous, saying, “They retaliate through the music. They’ll play louder than normal.”

“A liquor license is a privilege, not a right,” says Allen Garner, an attorney for Independence. “We’ve had over fifty calls for service already for police, which is a little bit high for any establishment.”

All of the parties went to municipal court, where they agreed to go through mediation. There they agreed that a neutral third party would measure sound decibels at the property line to determine whether the Bunker was too loud. At the same time, Rauzi says, he spent around $12,000 to soundproof the bar.

Around the end of June, Andrew Warlen of the Independence Health Department arrived to measure the Bunker’s noise levels. The city’s noise ordinance mandates that sound levels must be less than 60 decibels before 10 p.m. and less than 50 decibels after that. Warlen took one-minute readings from two locations along the property line on three dates.

“I found that the place is noisy anyway,” Warlen tells the Pitch. “There is lots of background noise from the traffic on Highway 40 and I-70. There is a power substation next door, there is the sound of air-conditioning and the sounds of cars going in and out of the parking lot. On June 27, I noticed with one reading I could really get, with just hearing the band, without any other apparent noise, it was between 53 and 55 decibels, which is in violation.”

But Warlen says his reading was unscientific because he was unable to distinguish the Bunker’s sounds from the ambient noise registering on his meter.

Bunker manager Penny has had the same problem. After the mediation session, she went to Radio Shack and bought a decibel meter exactly like the one Warlen uses. She takes a sound reading during each band’s set and records her findings in a log book with dates and times. She tells her sound engineer, Roger Bevs, to lower the amplifier volume if she thinks the sound is more than one decibel over the limit — much to Bevs’ chagrin.

“It’s not even on,” he complains at midnight on that recent Thursday night. Penny has just advised him that the club is at least three decibels over.

“I used to think this was about noise,” Rauzi says. (The bar would have closed long ago because of high legal fees had Rauzi not been a lawyer with time to research city code and testify on his bar’s behalf.) “We can conclusively prove that there’s no way they [the neighbors] are hearing this music. When Penny measures the sound at night, someone has to wave at her from the doorway to let her know when the bands are playing.”

And Echols’ latest actions do suggest that noise isn’t the main issue. Recently, Echols walked into the Bunker and informed Penny that he wanted to see every band member’s occupational license. According to another Independence ordinance, every band that performs in the city must obtain this license from City Hall, but the rule appears to be rarely enforced; managers at other live music venues in Independence along Highway 40 say they’ve never heard of the requirement. To get around the occupational license issue, Rauzi and Penny now complete IRS W-2 forms for each member of every band that performs there. The forms say that band members are employees of the Bunker and therefore under the umbrella of the venue’s operational license.

Rauzi and Penny say that the Bunker has been targeted by Echols.

Rauzi cites a letter Echols sent the Bunker’s landlord, Ollie Gates, as proof that Echols is making an unusual effort to shut down the joint. In the letter, which is not dated but is written on Independence Police Department letterhead, Echols warns Gates that he is tracking the bands that perform at the Bunker and will check to verify that Rauzi claims every band member on the club’s tax return. The letter also refers to summonses Echols has sent Gates as part of the officer’s nuisance-property crusade and offers to resolve them if Gates agrees to evict the Bunker’s owners.

“I don’t believe that Mr. Rauzi has the intention or ability to contain that facility,” Echols writes. “Since Mr. Rauzi is unable to solve this problem, I am relying on you. If you start an immediate eviction or reach an agreed-upon move-out date for the Bunker, I am certain that your charges could be negotiated … I have learned that at some point you must cut your losses. I personally understand the position you are in and have been down that road before. I believe this is a reasonable offer.”

Gates did not return the Pitch‘s calls.

“There’s two sides to every story,” Echols tells the Pitch. “We wouldn’t be doing this if we weren’t getting complaints from the neighborhood.” Asked whether there have been fights or other disturbances at the Bunker, Echols says, “It’s a bar that serves alcohol” before declining to comment further.

On October 4, Rauzi and Penny are scheduled to go before the Independence City Council and testify that the decision to revoke their liquor license should be overturned. They hope to bring supporters of the bar with them to face off against their neighbors, who also plan to testify.

For Penny, the issue comes down to freedom of expression. “The community sees us as a den of thieves, but come in here and you’ll see grandparents in their Dockers and Hush Puppies clapping for their grandson in his hardcore band, saying, ‘You were wonderful, Jimmy!'” she says.