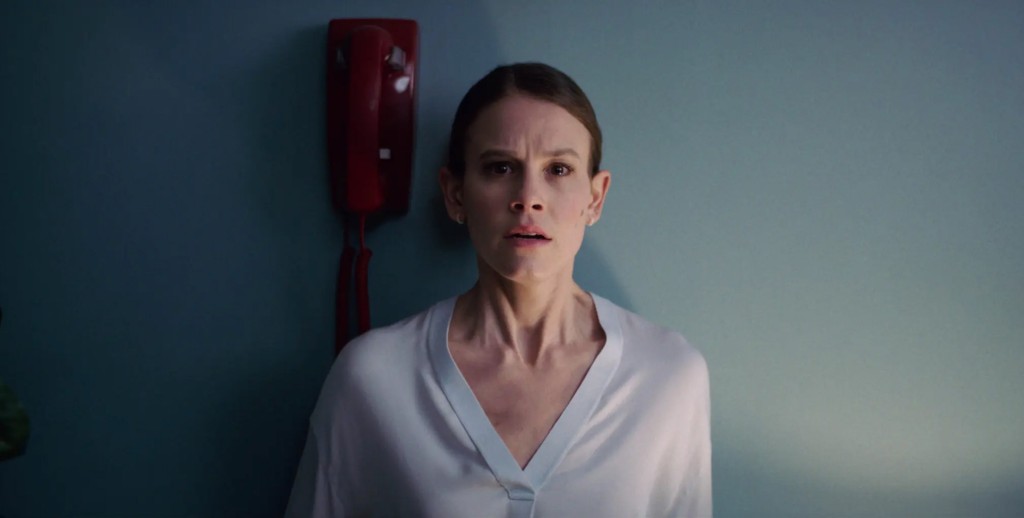 Parker Finn’s Smile is the latest iteration of this trend, a methodical and menacing tale about staring into the face of tragedy and coming out the other side. It would also be an instant classic but for an ending that doesn’t stick the landing.

At an emergency psychiatric wing of a New Jersey hospital, therapist Rose Cotter (Sosie Bacon) attempts to save as many troubled patients as she can, a drive that stems from witnessing her mother’s suicide. After an average (but busy) day of work, Rose is stopped by one last patient, Laura (Caitlin Stasey). From the outside she appears agitated, scared, and delusional.

But Laura is a Ph.D. candidate, and should be able to rationalize what she’s seeing, even if words fail to do it justice. Suddenly Laura’s frantic state is replaced by a disturbing grin, before she takes her life moments later. Naturally, things don’t get better from there, as the same nightmarish smiles that plagued her patient encroach on Rose’s world.

For a major studio release, Smile is surprisingly unrelenting and singularly focused on its bleak tone. In his feature debut, Finn spends a lot of time dealing with upsetting subject matter, never shying away from disturbing images or languishing on the uncomfortable toll trauma takes. You’d be forgiven for forgetting there’s an evil entity at work here were the film not so keen on reminding you.

As Rose searches for answers, she’s surrounded by solid character-actors to fill out the world. Her sister Holly (Jillian Sizner) and fiancée Trevor (Jessie T. Usher) are quick to turn their backs. While her boss (Kal Penn) and former therapist (Robin Weigert) have their own doubts. Only her ex-boyfriend cop Noel (Kyle Gallner, playing a normal person for once), doesn’t run off in the face of how unhinged Rose seems.

Finn directs each sequence to evoke the most tension possible, while cinematographer Charlie Sarroff and composer Cristobal Tapia de Veer twist the knife even further. Together it creates an unnerving, off-kilter viewing experience that worms its way under your skin and itches the brain in a truly uncomfortable fashion.

The litany of jump scares help create slight pockets of calm after they strike. The same goes for the visual effects, which unleash a fair deal of gruesome practical gore and scares.

The technical skill in Smile is undeniable, but the narrative portion finds itself wanting. What first seems to be a stirring examination of the effects of shouldering and surviving trauma gets twisted into something far more basic. Other films have charted “monster-as-metaphor” ground, but Smile introduces a literal “trauma monster.” That move strips the lead character of a true arc and becomes another movie where mental illness is a convenient crutch.

For most viewers, the bumps and stumbles that befall Smile won’t be the end of the world. The visuals alone remain horrific and will give birth to a legion of nightmares. This creates a bit of a pickle when recommending the movie.

Aesthetically it’s a home run. Narratively it falls apart. But, if you go in wanting to be scared—as more major studio horror films should be allowed to be—you’ll find what you’re looking for.