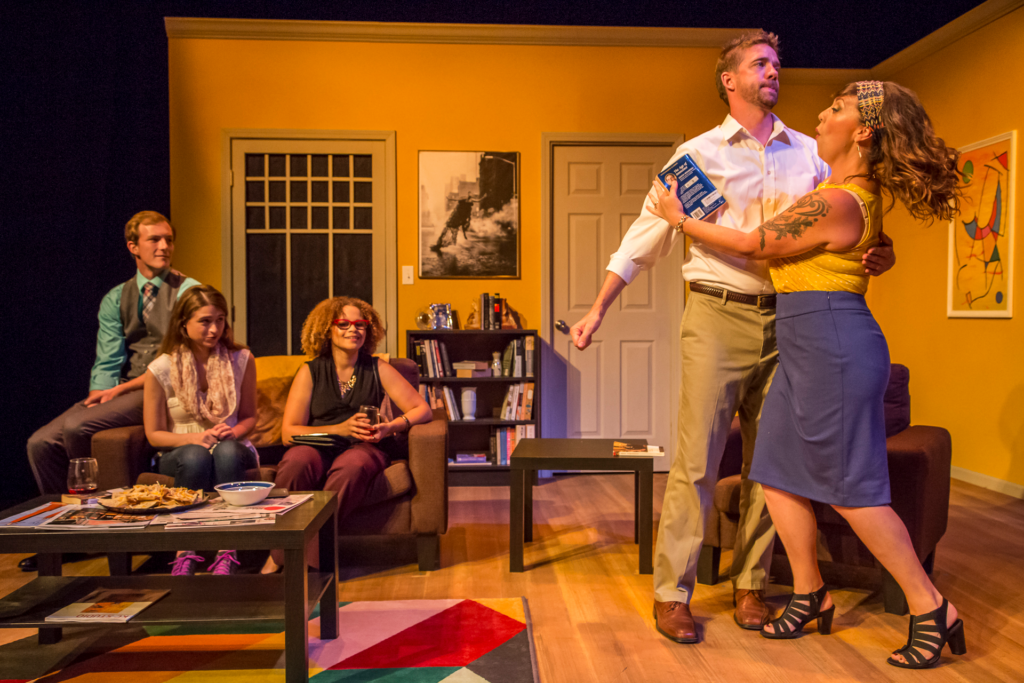 From wine-imbibing klatches to serious-lit socialities, book clubs are about as common as backyard barbecues. But who knew they could be quite so much fun? Kansas Repertory Theatre, on the University of Kansas campus in Lawrence, puts this social phenom under center-stage dissection in playwright Karen Zacarías’ uproarious and insightful The Book Club Play. If the title sounds dry, remedy that notion with your favorite summer beverage.

It’s a book club the audience nearly joined on opening night, so often cheering character revelations as to almost tear down the fourth wall. The play promotes that involvement with its meta-level self-reference and stripping away of artifice. Both critique of and homage to popular culture, The Book Club Play looks at the effect that both the classics and the Oprah selections have on their readers. But it’s the small group of friends making up those readers who are the heart of this story.

Sometimes sitcom, occasionally cliché (and a bit too pat in Act 2), this play retains an authenticity through its focus on the persons comprising this longstanding group of friends, and its changing interpersonal dynamics. Under Jane Barnette’s crisp, fine-tuned direction, strong performances bring these individuals to life as the play (which runs through Sunday, July 23) clips along at an engaging, impeccably timed pace.

The story begins in the smart, stylish Chicago home (scenic design by Mark Reaney) of the club’s apparent leader, Ana, and her husband, Rob. Their’s has been selected to be part of a documentary about book clubs, by a renowned filmmaker named Lars Knudsen. A camera has been set up in the home to record the group over several weeks (changing wardrobe by Kelly Vogel). It’s a “great opportunity,” Ana says, as she tells her guests to forget the camera is there.

Overly camera-conscious at first, then too often forgetting its presence until regretting it, these old and new friends — Ana (Shanna Jones), a newspaper columnist; Rob (Drew Vidal), a pharmaceutical salesman who prefers seeing the movie to reading the book; Will (Ethan Malin), a closeted museum curator; Jen (Noelle McDonald), a shy paralegal with a scandalous past; Lily (Francesca Haynes), an outspoken newspaper colleague of Ana’s who has recently relocated from Akron, Ohio; and Alex (Eric Palmquist), a comparative-lit professor and group newbie who disrupts the club’s longstanding balance — lay bare their thoughts, opinions and secrets as they discuss literature and popular fiction. From Moby-Dick (and the suggestion of a homosexual subtext) to The Age of Innocence to Twilight and The Da Vinci Code, everything reflects back on their own lives.

As Rob, Vidal gives a fluidly comic performance — like Brad Pitt in Moneyball, he’s nearly always eating — providing comic relief even in a comedy. His delivery of certain lines is so well-timed as to resonate hours later. Jones, too, is hilarious and layered, exuding the keen comic sense we noted in her appearance earlier this year in KC Repertory Theatre’s Side by Side by Sondheim. The cast members rounding out the small ensemble — Malin, McDonald, Haynes and Palmquist — also do good work, rendering their roles with credibility and depth.

“Pundits” interspersed between scenes (all distinctly portrayed with flair by a charismatic Graham Wells) — a Secret Service agent, a stock manager at Walmart, a retired librarian, a book “dealer” in prison and, most notably, a New York literary agent — comment on the state of books and literature.

Having spent years herself in a book club, Zacarías has transformed this all but universal experience into a lively, very funny, captivating play. You sense that these folks are really out there somewhere, involved with their books and with one another — and providing fodder for more delectable fiction.