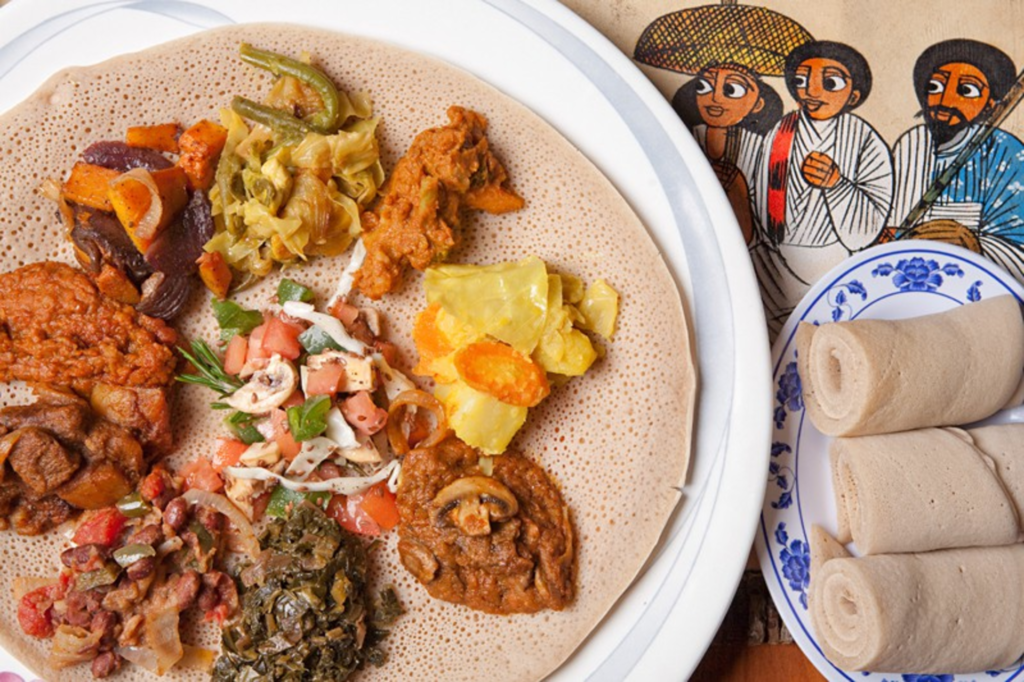 I have the same feeling about Ethiopian cuisine that I do about some of my friends: wonderful on certain occasions but not for everyday consumption.

That’s not an uncommon reaction to that country’s distinctive cuisine — spicy stews, sauteed meats, a soft bread used in place of forks. But even in this meat-and-potatoes community, there’s been at least one Ethiopian restaurant in the metro since the early 1990s, dating back to the old Martha’s Restaurant in Prairie Village. (Yes, Ethiopian restaurants serve both meat and potatoes but not in any Midwestern fashion.) Today there are three such restaurants, and Daniel Fikru and his wife, Selam, natives of Ethiopia, own two of them: the six-year-old Blue Nile restaurant in the River Market and his latest venture, at 133rd Street and Metcalf in Overland Park.

Fikru is a soft-spoken man but not shy. He proudly proclaims, on the glossy business cards for his four-month-old Blue Nile in Johnson County, that it’s “Kansas City’s favorite vegetarian restaurant.”

Other vegan-friendly restaurants in the city might cry foul, but friends of mine who prefer a meatless existence do indeed favor Fikru’s restaurants because of the array of vegetarian dishes — the menu features eight, and Fikru plans to add more — and the assurance that those meals are truly vegan. “In my culture, a vegetarian won’t touch any animal product,” Fikru says, “not even dairy.”

But the new Blue Nile isn’t a strictly vegetarian restaurant. The menu boasts beef, lamb and even shrimp, which Fikru doesn’t mind serving to customers but doesn’t eat himself. In Ethiopia, he explains, Christians observe the culinary commandments of the Old Testament. That’s why the Blue Nile serves no pork dishes and no shellfish, except for the one dish that serves up those pink crustaceans in spiced butter with ginger, garlic, turmeric and fresh rosemary. It stays on the menu, Fikru says, because his customers — particularly in the new Johnson County location — love it.

Fikru understands the different demographic in south JoCo. At his smaller River Market location, he sees a lot of young couples. The suburban venue attracts mostly families. No, there’s not an actual children’s menu here, but kids seem to enjoy the chance to eat grown-up dishes without utensils, using their fingers to squeeze a piece of spongy injera bread to snag a piece of beef or a bit of red-lentil stew. This novel form of eating vegetables might be alluring even to the most hard-core veg-hating child. For one thing, the vegetables at the Blue Nile don’t look like typical meatless dishes. The doughy shimbera assa sort of looks like little meatballs.

But not every meatless diner I know lusts after lentils or stewed cabbage with yellow onion and potatoes. “Ethiopian food,” says one friend of mine, “looks and tastes mushy and bland.”

It’s a fair criticism, and I had a little trouble finding dining companions — ones already familiar with the dishes of a culture that dates back to the second century B.C. — who were willing to travel to the new Blue Nile. But finally, two vegetarian friends agreed, and another friend, unfamiliar with Ethiopian cuisine, was eager to try it. On that first visit, I took vegetarian Devorah and meat-loving Truman, who were taken with Fikru’s place on sight. The grass-green dining room was perfumed by spicy fragrances wafting out of the kitchen: fresh ginger and onion, garlic and turmeric, rosemary and peppers.

The booths are set up like little bamboo huts, though there’s a clear view of the TV screen from every table. (It was tuned to a country-music awards show that evening.) There were only two other occupied tables in the room, and both groups — one was particularly raucous — were indulging in spirits: little glass carafes of pale-yellow tej, a honey wine. “It’s a little like mead,” Fikru says, “but it’s made with the extract of gesho, a kind of hop.”

Indeed, the gesho — Rhamnus prinoides — is a native Ethiopian shrub used in the production of both honey wine and Ethiopian beer. The leaves can be bitter, but the young wine is sweet. It gets dry as it ferments. A friend of mine who has sampled Blue Nile’s house-brewed tej says it’s very sweet and cold and packs an unexpected wallop. “I barely made it home,” she confessed.

Devorah, Truman and I stuck with less potent beverages, including a delicious, slightly carbonated concoction called gingebel, a combination of fresh ginger and lemon, pineapple and (maybe) orange juices. (Our server wasn’t sure and didn’t ask Fikru.) There’s a delicious cold-spiced tea on the menu, too, which we sipped while eating a starter: meatless sambusas — fried pastry triangles filled with seasoned lentils, cabbage and chopped carrots — which we dipped in a red-chili sauce called berbere.

The best way to sample all of the Blue Nile’s vegetarian dishes at once is to order the expensive but easy-to-share combination plate: an injera pancake dotted with little mounds of slightly bitter but delicious gomen (stewed collard greens), misir watt (a red-lentil stew seasoned with ginger, garlic, cardamom and the African chili powder known as berbere), atiklett (a wonderful, garlicky mash of cabbage and potatoes), yekik watt (slow-cooked, seasoned yellow split peas), fosolia (fresh green beans and carrots cooked with onion and spices), shiro (roasted chickpeas and sliced mushrooms in a brassy red sauce), dinich watt (potato chunks in garlic and berbere), and the little garbanzo-bean balls called shimbera assa (in a mildly spiced gravy with a hint of nutmeg).

Devorah seemed overwhelmed by the embarrassment of meatless riches, but Truman and I dug into the platter as well. We had also ordered meat dishes for ourselves: the popular doro watt and yebeg watt. A staple of the Blue Nile’s lunch buffet, doro watt is a stew of lemon-marinated chicken pieces, sauteed in butter and herbs and slowly simmered in a red-pepper sauce. It’s a moist, perfectly spiced creation and even more satisfying eaten on a sheath of injera with a bit of collard greens. Southern-born Truman says there’s a reason that this dish and greens make such a great combination: “It’s perilously close to North Carolina barbecue,” he says.

Truman liked the curry-flavored sauce in his lamb stew, but we both felt that the lamb was just a shade too leathery, even after stewing. “Maybe I should have ordered a tibbs,” Truman said.

The difference between a tibbs dish and a watt, Fikru explained, is that the former is a sauté and the latter is a stew. “In Ethiopia,” he says, “tibbs is anything sautéed in a pan with a little oil or butter and, usually, herbs.”

On my return visit with Crystal, a vegetarian, I ordered the yesiga tibbs, a beef dish. Crystal was happily settled down with an array of vegan dishes when I received my bowl of beef chunks in a seductively spicy garlic-butter sauce dappled with onion, tomatoes, peppers and fresh rosemary. It looked spectacular, but the meat strips were again disappointingly chewy. I tore pieces of the vaguely sour injera, plucked up a bit of meat and some of Crystal’s misir watt and had a satisfying meal anyway.

The desserts at Blue Nile are as American as apple pie without actually being apple pie. “We don’t really eat desserts in Ethiopia,” Fikru explains. “Maybe a piece of fruit or something savory, like roasted garbanzo beans, with our coffee.” Kansas Citians require dessert, though, so Fikru buys good-looking, crowd-pleasing cheesecake and chocolate mousse cake from Cheesecake Factory. “If my customers want a pastry after dinner, I give it to them,” he says. Not so authentic, maybe, but even vegetarians occasionally prefer cheesecake to roasted garbanzos.