From scripting to casting to production and editing, movies take a long time to produce. So it makes sense that 2018 was the first year we’ve seen films really reacting to the growing sense of global anger and alienation that set it sometime around the second week of November 2016.

Many of the year’s best films had a sense of mounting dread and dealt directly with themes of otherness, while others chose the route of immersion — mind-melding audiences with their lead characters and forcing them to walk a mile in their shoes. In a year that we needed empathy, we got a lot of it — in mainstream movies and independent sleeper hits.

Put simply, the best films of 2018 were transportive. Choosing just ten of them to represent 2018 felt impossible, so I cheated a bit here at the beginning, grouping together two of the most delightfully dark, subversive, and all-or-nothing comedies in years. Enjoy.

10. Sorry to Bother You and The Favourite

In writer-director Boots Riley’s Sorry to Bother You, Oakland-based telemarketer Cassius Green (Lakeith Stanfield) climbs the corporate ladder in an absurdist near-future where stressed-out citizens sign lifetime work contracts in a legal slavery-for-profit scheme. It’s disgusting, but having everything paid for is “worry-free.” There’s a prevailing air of futility, so when “Cash” — who literally lives in a garage — sees a way out, he goes for it, even if it means selling his soul. The prisoners of The Favourite are three royal women (Olivia Colman, Rachel Weisz, and Emma Stone) locked in a power struggle in a gaudy 18th Century mansion. This deliciously vulgar film, from director Yorgos Lanthimos (The Lobster), is miles away from the standard costume drama. It shoots Queen Anne, Sarah, and Abigail with fish-eye lenses, which is appropriate, given that they behave like animals at the zoo. Screw realism — The Favourite embraces anachronism and absurdity to highlight the rampant sexism and ridiculousness of the insulated world in which these women reside. But where Riley goes into full-on, hilariously abnormal territory by the end, Lanthimos pulls back just a hair to reveal the tragic sadness beneath all the desperate game-playing. 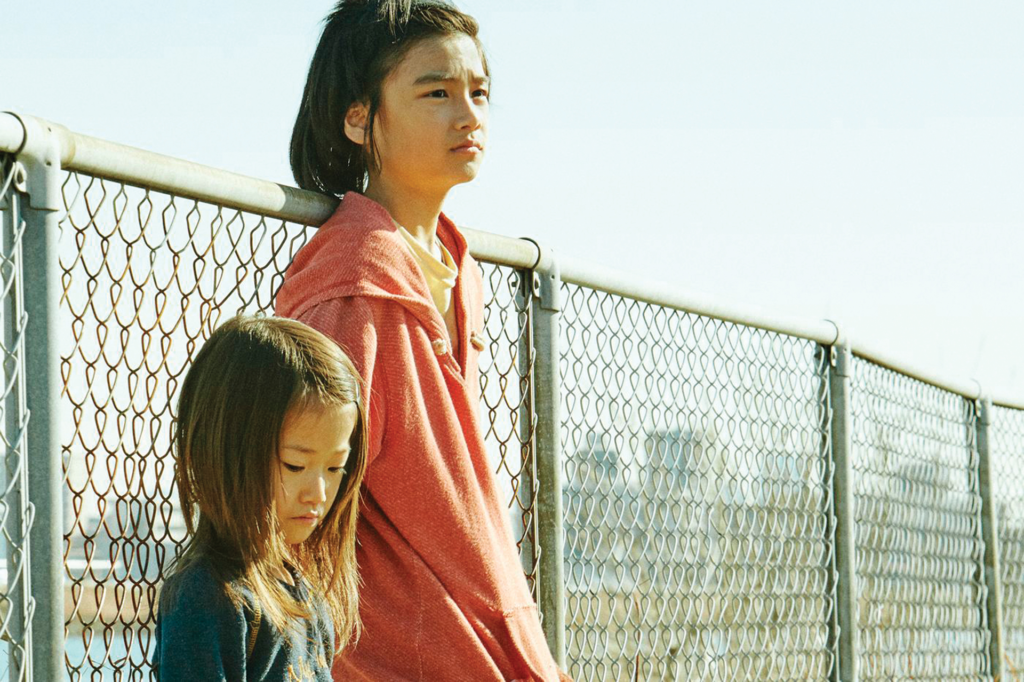 The setup for this thorny drama from celebrated Japanese auteur Hirokazu Kore-eda sounds like it could be a preachy, miserable experience, but it’s anything but. A poverty-stricken family in Tokyo lives on the fringe of society and does what it can to survive, and their loyalty is tested when outside forces interfere. We’ve all seen variations on the “family is what you make it” theme, but Shoplifters challenges the way we perceive familiar story arcs and forces its audience to take a more nuanced view of things. A close-up view of the way the Shibatas operate reveals their compassion for each other, but the film doesn’t settle for easy classifications. Beware: This one may shake you. 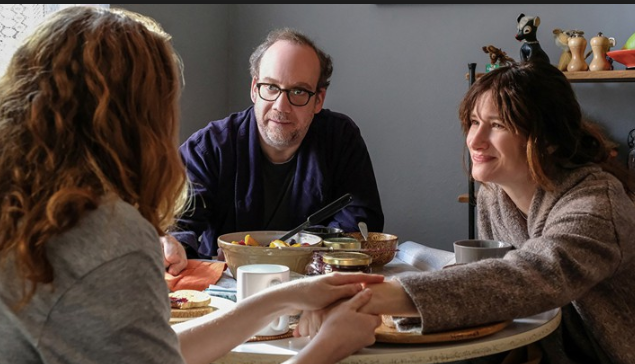 It’s been 11 years since writer-director Tamara Jenkins’ last movie — the expertly nuanced family drama The Savages, starring Philip Seymour Hoffman and Laura Linney — and it was worth the wait. Private Life arrives in similarly sharpened fashion, detailing the trials and tribulations of a middle-aged NYC couple (Kathryn Hahn and Paul Giamatti) trying to conceive. Ground down from IVF fails, medical ignominies, and false starts with surrogates, their desperation leads them to make a decision with all kinds of awkward implications. Jenkins understands from experience the intricacies of how relationships are tested in this way, and Hahn and Giamatti give voice to their contradictions while retaining their relatability. Newcomer Kayli Carter gives one of the best performances of the year in a supporting role.

Marvel’s Black Panther is full of breathtaking visuals, from the richly designed Afro-futuristic backdrops and costumes of the fictional kingdom of Wakanda to the sweeping shots of a landscape unencumbered by intrusion from the rest of the universe. But this comic-book adaptation from writer-director Ryan Coogler does more than just give voice to an under-represented filmgoing demographic — it rewrites the history of slavery. The Wakandans have lived in isolation and are smarter, more beautiful, and more powerful than the rest of Earth’s population. The bad guy who threatens their peaceful way of life (Michael B. Jordan’s Killmonger, the real star of the movie) is an African-American, full of resentment and honed into a deadly weapon by the U.S. government. And although Prince T’Challa (Chadwick Boseman) knows the decision will destroy their way of life forever, he accepts his civilization’s moral responsibility and shares Wakandan secrets at the U.N. to better the world. Did I say Sorry to Bother You and The Favourite were subversive? Fuck that: Coogler sold this allegorical morality play and celebration of black culture as a superhero film. 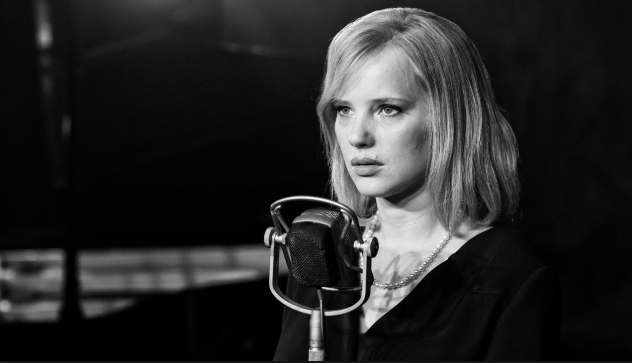 Eighty-four minutes is all it takes for writer-director Pawel Pawliowski to turn the traditional idea of a lush European romance on its head with Cold War. Forgoing a widescreen color palette for stark black-and-white cinematography and a 4:3 aspect ratio, the Polish auteur behind 2015 Oscar winner Ida has crafted a deeply felt tribute to his own parents’ unlikely love story. Set in 1950s Poland, Cold War introduces an up-and-coming music director (Tomasz Kot) and a talented but rough young singer (Joanna Kulig). Their volatile courtship morphs in surprising ways — even with other partners — over a decade across the Iron Curtain, but the inordinate pull they exact on each other through it all cannot be denied. 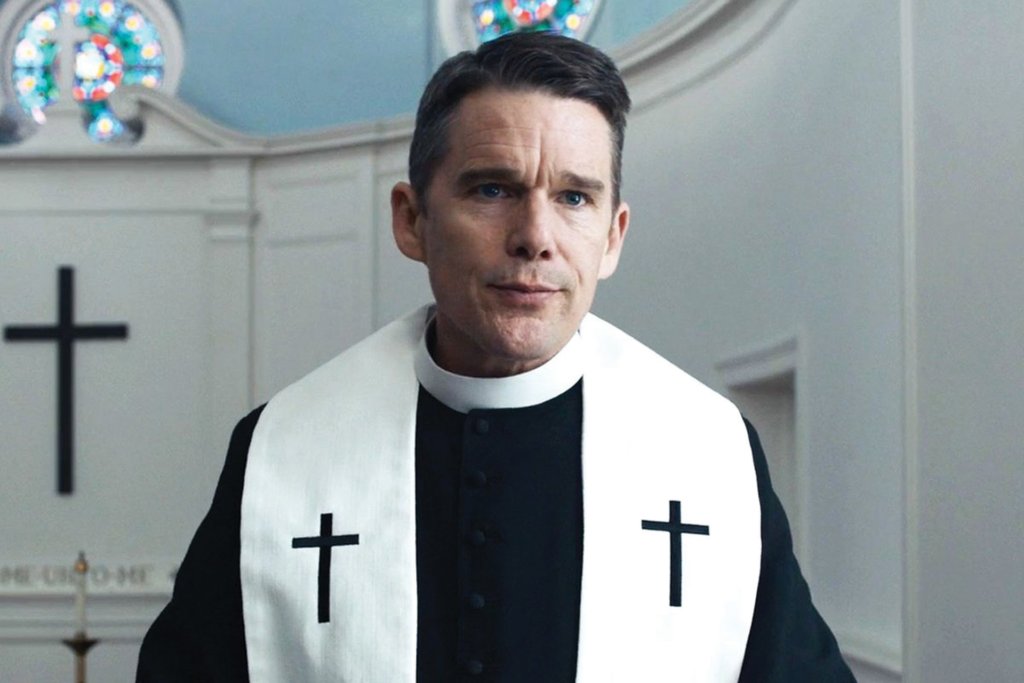 Paul Schrader is perhaps best known as the screenwriter of Raging Bull and Taxi Driver, but he also wrote the book on transcendental cinema, a style that values stillness, minimalism, and reverence for the viewing experience. With First Reformed (like Cold War, also shot in 4:3) he follows those tenets for the first time in his directing career, to devastating effect. Ethan Hawke plays a grieving priest who confronts the specter of climate change with a religious seriousness. As he counsels a young couple, the power of their convictions are transferred to him, and by turn, the audience. First Reformed channels Hawke’s experience and plants us in his headspace, leaving us to ponder the cause of his increasingly worrisome behavior. When Schrader — spoiler alert — then breaks the transcendental rules, we are deeply invested, and the result is devastating. Or thrilling. Or both. 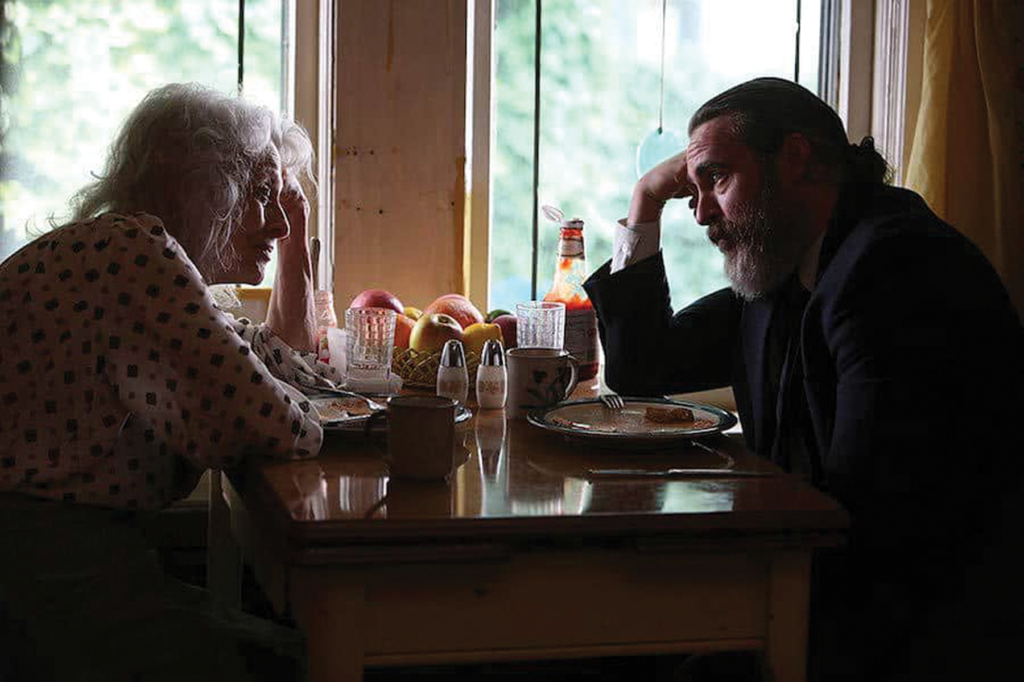 4. You Were Never Really Here

As experiential as First Reformed but in a more expressionistic way, You Were Never Really Here, from writer-director Lynne Ramsay, embeds us with Joe (Joaquin Phoenix), a suicidal veteran suffering from severe depression and PTSD. Somewhere outside of the terrifying confines of his mind, the semi-familiar plot of a hitman crime drama appears to be forming. Filtering those details through his damaged psyche, however, isn’t easy. Ramsay embeds us so thoroughly with Joe that his violent version of morality and justice begins to make sense to us, especially when he discovers government agents participating in a sex trafficking cover-up for a politician. Jonny Greenwood’s throbbing score is one of the best of the year, magnifying Joe’s raw desperation and alienation from pretty much all of society. That he surprisingly finds a kindred soul by film’s end, I suppose, is a small light at the end of the tunnel. 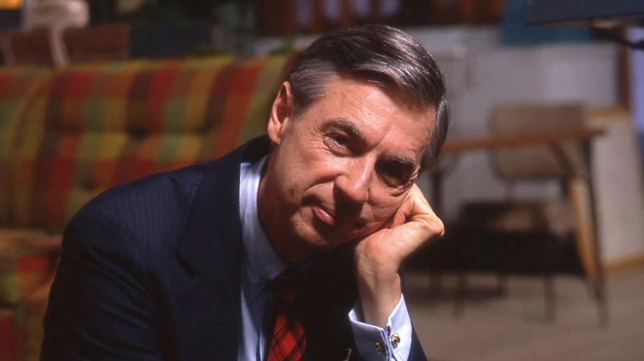 The earnest empathy of Mr. Rogers in this expertly conceived biopic documentary from Morgan Neville (You’ll Miss Me When I’m Dead, 20 Feet From Stardom) provides a much-needed antidote to the steady stream of cruel rhetoric that comes from the White House daily. Rogers’ slow, measured speaking tonality has long made adults wonder if there’s something “off” about the children’s TV host. But it’s actually true that his life was as simple as it appeared to be. He was fully dedicated to idea that there’s no greater need than healthy childhood development and that TV was the way to reach those kids. Neville explores the depth and sincerity of Rogers’ beliefs, and throws into perspective all the ways that he focused on concepts like equality and kindness with his audience. These days, the man in the red sweater seems downright revolutionary. 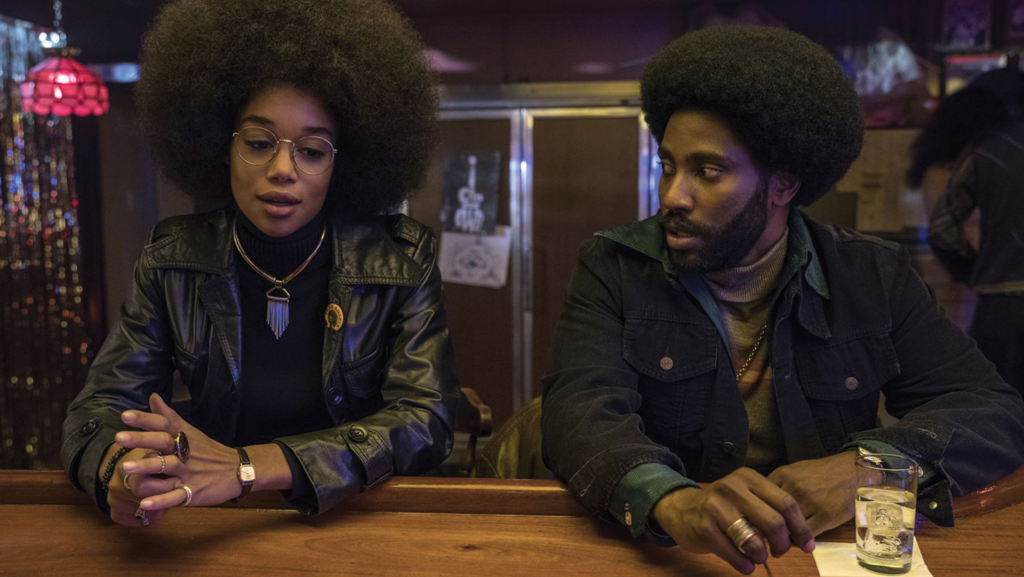 In that same vein, the most seething indictment of modern American culture that came out last year is set in the 1970s and based on a story that’s almost too wild to be true. Black Colorado Springs police officer Ron Stallworth (John David Washington) infiltrated the Ku Klux Klan over the phone, becoming a card-carrying member, while his white Jewish partner (Adam Driver) met the racist conspirators in person. University of Kansas film professor Kevin Wilmott and director Spike Lee re-wrote the screenplay given to them by producer Jordan Peele, and it’s a masterclass in exposing stupidity and hypocrisy. Lee lets the absurdity of the story be its own joke, so BlacKkKlansman becomes ridiculously funny and heartbreaking in almost equal measure. The lines to today’s resurgence of white nationalism may be drawn too clearly for some, but fuck ‘em. We all need to hear it. 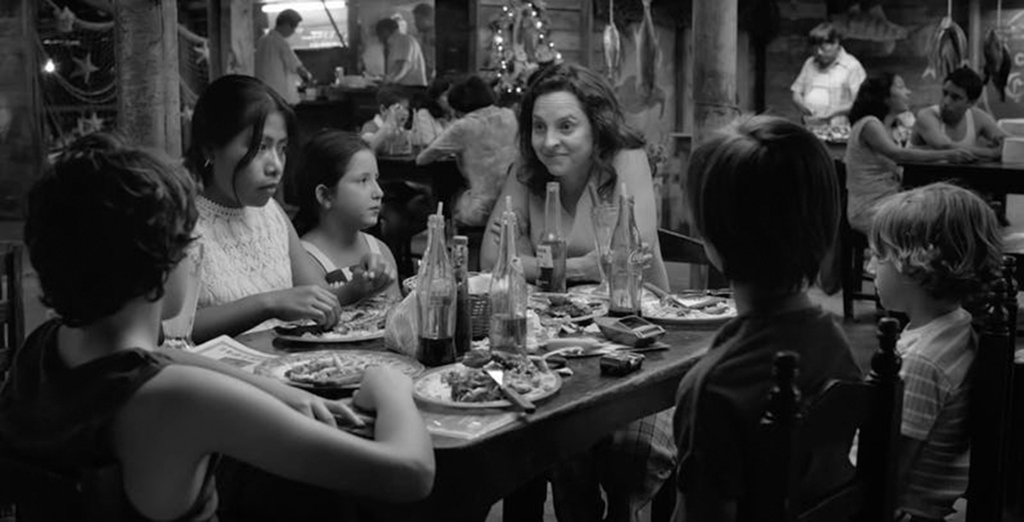 Shot by director Alfonso Cuarón in black and white, using digital cameras that capture 65mm-level clarity and detail, Roma is about as immersive an experience one can have this side of virtual reality. Cuarón makes the personal universal, translating his own childhood memories of growing up in 1970s Mexico City into a vivid cinematic journey. By telling the story from the point of view of a live-in housekeeper — an indigenous woman named Cleo (Yalitza Aparicio) — he highlights the ways in which people compartmentalize certain aspects of life, and the complicated ways we relate to others. Cleo is essential to making the family work, but she stands just outside of it. In dramatizing the intimacy she shares with them, Cuarón also the makes clear the distance between them. Even though its extended takes and all-enveloping sound design are meticulously designed, Roma is a rapturous example of how movies can capture and illuminate life, seemingly unadorned.