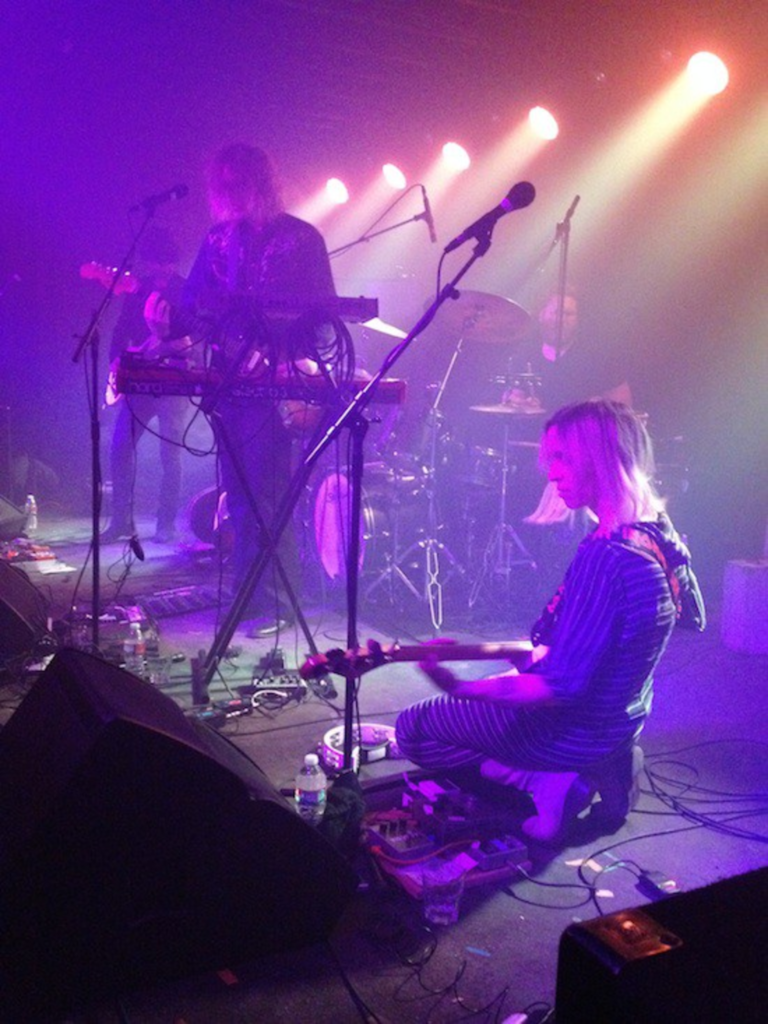 Despite the biting November weather last night, the Besnard Lakes managed to give a show at the Riot Room that kept the eager audience lingering well into the early morning hours.

The show commenced with a short set from Pioneer, followed by hometown rockers the Phillistines. Pioneer was young and charming; its timing was spot on and the lyrics expressed emotional ties to coal miners of the past. With a little more conviction, these guys could definitely create some buzz. The Phillistines’ delivery was a bit more tempestuous – perhaps training our ears for what was to come.

The Besnard Lakes took the stage at the Riot Room and immediately kicked things off with blasting smoke and fog machines, which wafted through the blue stage lighting. The crowd, which for openers had been a little timid, quickly flooded the area in front of the stage.

The Besnard Lakes’ dreamlike manor took listeners on a voyage into an altered world. This world functioned around the strong magnetism between husband and wife duo Jace Lasek (keys, guitar) and Olga Goreas (bass) and the general rapture emanating from the crowd. Drummer Kevin Laing and guitarist Richard White provided further unification of the band with four-part harmonies and captivating chord progressions. There were a variety of odd sounds that somehow worked together: strange birdcalls, meticulously fitting into rhythmic balance, to screeches from White’s guitar.

As it turns out, the Kansas City show was almost in danger of cancellation. Apparently, a previous engagement around Sweetwater, Texas, provided the band with a somewhat characteristic small-town incident: The Besnard Lakes’ tour bus was greeted, antlers on, by a deer that slowed down its dreamlike junket. Luckily for us, a replacement bus was quickly arranged for.

The set list was made up mostly of songs from the third album, The Besnard Lakes Are the Roaring Night and from their fourth and latest released album, Until in Excess, Imperceptible UFO. The eventual use of heavy sound effects, generally picking up midset, added to the overall state of somewhat consciousness that the band perpetuated. You seem to get lost in the band’s presence, as though you’ve just been dropped into a Rob Zombie movie, lost in a cultlike state while unconsciously allowing it, just waiting to face your death.

Perhaps the most bizarre and unnerving song was the final encore piece, “Alamogordo.” The band tied it into their disruptive deer experience, since it eventually led them from Roswell to the land of Sweetwater and the Alamo. They couldn’t have planned it better.

Leftovers: One thing: My lungs are shot from the smoke machine. It was worth it, though.

Setlist:
Like the Ocean, Like the Innocent
Colour Yr Lights In
Glass Printer
The Specter
People of the Sticks
46 Satires
Albatross
And This Is What We Call Progress
And You Lied to Me
–
Disaster
At Midnight
Alamogordo