The Bacon Brothers talk getting the audience on their side; at Prohibition Hall Friday 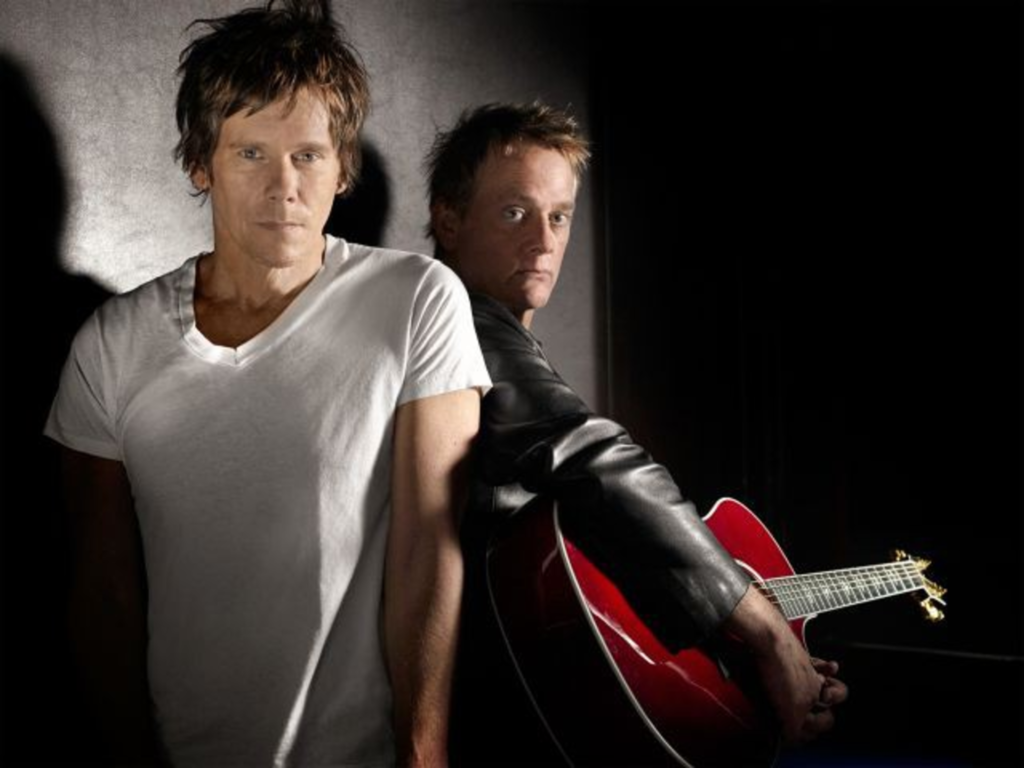 The Bacon Brothers are perhaps best known as “that band Kevin Bacon is in with his brother,” but that’s a reductionist view of the duo. The duo plays a mix of music that, while initially disparate, can easily be grouped under the Americana header. It’s a soulful blend, which demonstrates that brothers Michael and Kevin are so much more than Keanu’s Reeves’ Dogstar or Russell Crowe’s 30 Odd Foot of Grunts.

The Bacons released their most recent album, 36¢, in September of last year. We spoke with Michael and Kevin by phone about playing original music and getting the crowd on your side.

The Pitch: Reading reviews, it seems that everyone is rather amazed that you’re talented. Does it make you try harder?

So, I don’t think that we’re trying to prove anything, except to entertain the audience as much as best we can.

There’s a lot of diversity in your music: country, rock, folk, and so on. What were your influences growing up, or as you’ve gone along as a band?

Kevin Bacon: You know, our first record, we called FoRoSoCo, because of trying to answer that question. Because that’s the first thing that people say, when you’re putting a band together: “What are you like? Who are you like? Who do you sound like?” And our influences were folk-rock and soul and country. That’s where we came up with FoRoSoCo.

We don’t think too much about trying to have a sound. We really are a song writing based band, so we write a song, and the song tells us where the sound is gonna go. I think when you do that, and you have two different writers in the band, you end up kind of all over the map.

What is that songwriting process like, since you’re both writing songs. Do you collaborate or – being bicoastal – do you both bring different things?

MB: Well, I think that the songwriting process is … God, I would say that we first started writing songs over 40 years ago. So, the first time that we collaborated, Kevin was kind of coming up with songs, and I was helping put chords to them, and kind of get them into a form. We did a demo very early, right when Michael Jackson was big, and I was trying to make my brother into another Michael Jackson.

As we developed as songwriters, we started writing songs for other people to record. When Kevin started getting work in movies, we would write songs for his films – all of which were rejected – and we just went after trends. We wrote a song about roller disco.

We just weren’t having a lot of success with that, and then – when we put the band together in the ’90s –we sort of realized it had to be something a little bit different. It had to be something that we were more invested in personally, because we weren’t just writing songs as a get-rich-quick scheme. People were actually coming out to hear us, and wanted to get to know us through our music. At that point, I think we started to focus on songs that were a little more personal and less commercial.

From that point forward, everything that’s happened for the band has been a result of us following it. It leads us. We don’t really lead it. As Kevin said, we let the songs take us where they want to go, rather than put a band together for a certain kind of sound. I think that’s our philosophy, and we’ve been successful with that philosophy.

I’m not going to lie: I would really like to hear that roller disco song.

KB: “Eight Wheel Boogie.” It’s dreadful. It was like what you’d call a novelty song, you know. Lyrically tongue-in-cheek.

What was the first song that you felt expressed yourselves, rather than a trend?

MB: We wrote this song called “Only A Good Woman,” and for the first couple of years, we could have a really bad gig, but we could play this song and get the audience back. Women love the song; it’s really a tribute to women. I think it’s really Bacon Brother-ish, because it has Kevin’s sense of humor, but at the same time, it’s really defined who we are as men in our lives with women. In a way, it’s a very personal song, but it’s also kind of funny, and it rocks. It took a long time until we were able to get that out of the set, because people always want to hear it. That was really the first one that defined the Bacon Brothers.

Have you found that there are places which are more receptive to the Bacon Brothers than others?

Why do you think that is?

KB: There are other places, you know, but it’s hard to put your finger on it. For us, the hardest is thing is that a lot of the time, a lot of the people don’t know any of the music. If you’re a cover band, that’s not quite as hard, because you can play “Lean on Me” and everyone knows it, but if you’re playing original music, you’re asking people to sit down and absorb new lyrics and new music and new ideas. It’s a hard show to put across.

I wish we were a band that had an hour and a half of hits. It must be really, really fun to someone like the Stones or Springsteen or something, where you just know that every single person in that giant arena knows every single moment of every single tune. That must be a really exciting thing to do, but that’s not our thing, so if we come into a place and there’s even a fraction of the audience that knows even a fraction of the tunes, that’s going to make things more fun.